Six bartenders, four challenges and £4.5K up for grabs in the 2022 Global Meister Hunter final. 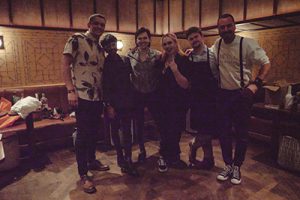 36 hours earlier, those eyes and the 6 bartenders they belonged to, had gathered at the start of the 2 day extravaganza that is the Jägermeister Meister Hunter final. So before we see which of those pairs of eyes was about to go extra wide as their name was announced let’s go back and see what the previous two days had involved.

Before we get going for anyone unaware, the Meister Hunter final is a unique experience. It takes place over two days combining a series of masterclasses by experts in their field, with challenges based on these masterclasses. There is also, of course, the chance to let your hair down a bit and have some delicious drinks.

This year was a first for the Meister Hunter final with finalists coming from outside of the UK, with Canada and Republic of Ireland joining in the battle. This seems like a good time to introduce our finalists:

It is also worth pointing out before we get into the nitty gritty that the competitors had no idea what the nitty gritty was before they arrived. All they knew was that the drink that had got them to the final would not be involved and that a series of challenges and masterclasses lay ahead.

So when they arrived at their first venue of the day early on a rainy Monday morning in Shoreditch, they were clueless as to what lay ahead. Well maybe not completely clueless as the venue was called Food52, before the google could confirm it was a cookery school they were festooned with aprons and armed with knives and told ‘Welcome to our cookery school’.

The challenge was to create an Asian dish which later in the day they would need to pair a cocktail with, the dish would also have to contain one of the Jägermeister range (original, Manifest and Cold Brew). There were varying levels of kitchen competence in the room but luckily Food52 had some very talented and patient chefs on hand to assist our merry band of Hunters. By the end of the allotted time the dishes looked great and the finalists look very pleased with their efforts. Over to the chefs to judge the first round of the final.

A short dance through raindrops with dishes in hand saw the bartenders arrive at The Gibson where an array of Asian ingredients (fruit, vegetables, sauces, spices, sweets and more) were laid out in such numbers Wing Yip would be jealous. As packets were squeezed, fruits were sniffed and looks were confused Marian Beke was busy behind the bar making sure everything was set for them.

The task was unveiled, make a cocktail to match with your dish using the Asian ingredients, mixers and any of the Jägermeister range. What really made this challenge stand out was that they had Marian on hand with all of his knowledge of not just cocktails, flavours and techniques but also his encyclopaedic understanding of Asian ingredients. Over the next 2 hours each bartender got one-on-one time with Marian behind his bar to help them create a drink to present to the judges (Marian, Flo and BarLifeUK). 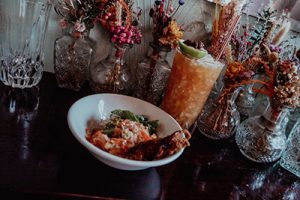 Rarely, if ever, during a competition have I been fed so well with Pad Thai, gyoza, salmon, pork and prawns (my favourite being Sam’s Spicey Raw Salad). The use of some unusual ingredients in the drinks was also very clever from Carrie’s syrup including smoked tuna flakes, Erin’s cordial including teriyaki and tamarind as well as Sam’s pickled ginger brine. However, it was Pierre who just took the first day’s challenge with a Tiki style serve matched with his deep fried prawn head with Vietnamese salad.

I left the group as they headed to a cryochamber….. place? Followed by drinks and dinner I went through my scores and notes. I was only one judge and this was only day one but one think had become clear this was a battle that was going to go all the way.

Day two started where day one had left off, at The Gibson with a room full of lovely aromas. This time the source of the airborne nose pleasantries was Ericka Duffy, more specifically mainly, but not entirely, what she had brought with her. For anyone who hasn’t had the delight of listening to one of Ericka’s talks we will try to give you a wee glimpse here but track her down as her sessions are as interesting and engaging as any we have seen. 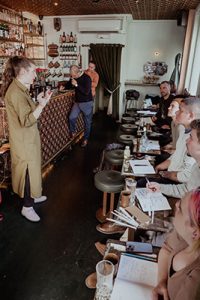 Ericka is a sensory specialist focusing on olfaction and flavour, she has previously trained as a barista and worked at a high level in the world of perfumes. In the last 10 plus years she has focused on cocktails and cocktail bars. Her understanding of how to use the sensory world to positively impact not only cocktails but a visitors experience in your bar is stunning. The only thing more impressive is her ability to explain a subject which can be so overwhelming (much like Flo’s fragrancy of choice) so effortlessly.

After having their minds blown by Ericka it was over to Marian to show some of his favourite tricks for adding sensory experiences to cocktails with a special focus on aroma. Not only did he explain his techniques but he then, once again, opened his bar, it’s equipment and his brain to the bartenders to use. They needed it, as later that evening they would be behind the bar at Oriole creating a drink which highlighted both aroma and Jägermeister.

I don’t remember the last time I saw so many people watching a cocktail competition. By the time Sam, as competitor number one, stepped behind the bar at Oriole there was a mass of people in the room. They weren’t just there for the superb Jägermeister cocktails the Oriole team had put together but were genuinely there to watch the competition. The silence as each competitor stepped behind the bar proved that.

As I hung with the competitors in the hour before the competition started you could feel the nerves rising not just as the start time got closer but as each new group of people arrived. They had only started conceptualising their drink half a dozen hours earlier, in that time not only had they come up with their drink but also the presentation that could win them a giant check for £3K.

The judging panel of BarLifeUK, Florian, Marian, Ericka and Global Marketing Head for Jägermeister Nina Eggeling were about to be treated to senses filled presentations and drinks from six exceptionally talented bartenders.

Sam kicked us off with a drink based around a coco butter and morrell fat-washed Jägermeister with smoky notes from a lapsang souchong syrup which invoked thoughts of Curt Mast at the end of a hunt in the forest. Erin embraced the aromas with two pillows he had filled with smoke which he punctured as he served his ginger and jasmine flower based cocktail celebrating both Manifest and Cold Brew Jägermeister. 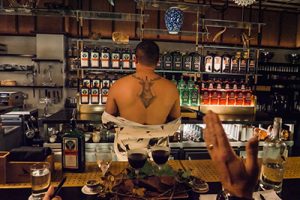 Cleopatra was a bad ass, Carrie says so, a bad ass that took baths in milk with cardamon, inspiring her cardamon fat-washed Manifest combined with a pineapple and honey shrub to form the backbone of her serve. To make a drink in front of a big crowd is one thing, Helio went one step further, after presenting his serve combining Manifest with big flavours such as truffle, molasses, black truffle and Persian lime he stripped to reveal his Jägermeister stag back tattoo – boom.

Pierre had travelled from Canada for the final, but it was memories of his time living in London eating curries that inspired his drink using the botanicals in Jägermeister with almond, pistachio and apricot to invoke a memory heightened by his rose powder aroma. Tristan found inspiration from a housemates birthday burning bay leaves on a fire, his New York Sour twist saw a mulled wine float on top of a drink boasting acidified orange juice with burning bay leaves providing the aroma.

After the judges deliberation we find ourselves back at the start of this tale, Florian in the spotlight and me standing off to the side with three giant checks ready to hand out. Everyone was waiting for one name, the winners name, the name of the 2022 Global Meister Hunter Champion. And that name was Carrie Smith.

Carrie was champ. Pierre took second (and £1K) with Tristan third (and £500). However all the finalists could be very proud of their achievements and for making it such a fun couple of days. As the night progressed Florian insisted on doing a flair show for the crowd before the DJ’s kicked in and the Jägermeister flowed long into the night. 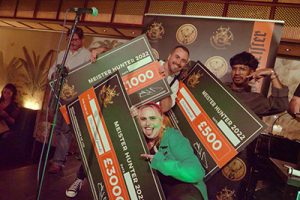 It was the end of yet another epic Meister Hunter competition, one of the biggest and best competitions going, and surely the best party to celebrate it all. A huge congratulations to Florian for pushing the competition, once again, to the next level and to the rest of the Jägermeister team for helping make it a reality, especially Dan Mussen for epic work on the final. As always a big thanks to the Oriole team for keeping such a big crowd so well lubricated.

Jägermeister Meister Hunter will be back next year and will be, rumour has it, bigger than ever. We encourage you to get involved, it really is a something special. For now congratulations to Carrie and the rest of the finalists.