If I were to choose one word to describe life now and over the past two years, it would probably be ‘overwhelming’. There has been so much to deal with – isolation, financial stress, fears for our health and the health of our friends and family, not to mention growing fears about climate change and the country being run by dead-eyed psychopaths. In short, it’s quite easy to wake up in the morning and feel overwhelmed, through absolutely no fault of one’s own. 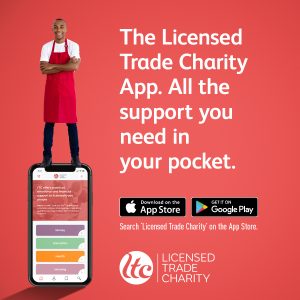 This fact makes the fast access to emotional and mental health support offered by the new Licensed Trade Charity app extremely important, in my opinion. The app, which is free and available to anyone who works, or has worked, in the trade, regardless of the length of their employment, can connect users with trained personnel who are able to provide immediate emotional support, and who can go on to arrange six telephone sessions with a counsellor.

The press release which the charity sent us this morning states that last year the volume of calls to their helpline increased by 127%. 41% of those calls were made by people seeking help with their mental health, and many are described as being in a ‘moment of crisis’.  A moment of crisis have happen for anyone, so having help at immediate hand via our always-present phones can only be a good thing, and we endorse the charity’s call for everyone who works in the trade to download the app, and tell their friends to do the same.

For those unaware, the Licensed Trade Charity has been supporting members of the trade since its foundation in 1793, and in addition to mental health assistance, can also provide help with financial, employment, and housing issues.

To download the app, search for Licensed Trade Charity in the iOS app store, or Google Play.