Never Say Die – What Is The Deal With England’s Bourbon?

We have a look at the latest American Whiskey brand fighting for space on your backbar and try to bust some rumours and myths flying around.

It’s a first for BarLifeUK to be offered an American Whiskey trip and find ourselves on a train to a misty Derbyshire. Never Say Die is an Bourbon with a difference, and we were about to spend the day finding out all about it.

Let’s start with the elephant in the distillery so we can move on. Since it was launched there has been lots of chat around the Never Say Die tagline of England’s (or British) Bourbon. ‘It can either be British or it can be Bourbon, it can’t be both.’ As one irate bartender put it to me (with a lot more expletives) recently. To a certain extent I had to agree with him but as always it wasn’t as black and white as that.

There have been two issues on this front. Firstly, the messaging and tagline itself from Never Say Die was, in my opinion, misplaced. This is a first foray into the booze business from the people behind the brand and I think it would be fair to say they didn’t anticipate the reaction they got. To be honest I wouldn’t be at all surprised if you see this wording slowly fade over time.

Secondly, some people in our industry may have slightly overreacted. I know, unusual right?

So what are the facts behind it. Pretty simple really. It is made at a distillery in Kentucky, it is aged for 5 years in charred new American Oak barrels (in short it hits all the Bourbon tick points) and then it is shipped to the UK. All pretty standard stuff, until you look at that shipping bit. You see American Whiskey, in fact all booze, is shipped in one of two ways, already bottled or in big stainless steel containers to be bottled in Europe. Never Say Die however ship it over in those same barrels it was aged in. Straight from the rickhouse onto the ship.

It is this time spent on the ship, the first shipment took 6 weeks, which makes a big difference to the flavour (more on that shortly). Once off the ship it is aged in a UK distillery for a few weeks/months which returns us back to Derbyshire and the very lovely White Peak Distillery.

Owned by husband and wife team Max and Claire Vaughan in the heart of the Peak District in an old Wire Mill, the White Peak Distillery produces a range of English Whisky and Gin. We will be doing another article on them soon but for this story they are responsible for the third ageing and then bottling Never Say Die.

So you see it is definitely a Bourbon but it is aged on the sea, then aged some more and bottled in Britain, so you can see where the idea for calling it a British Bourbon comes from.

After a tour of the distillery we sat down in their tasting room in front of a roaring fire to try the whiskey but before we got to that there was a story to tell, and what a story it was. To be honest I usually call bullshit pretty quickly on brand stories, but this one rang true. It also reminded me slightly of Jackanory (a reference for our older readers) as founder of Never Say Die, David Wild sat in front of aforementioned fire and regaled us with the true story of Never Say Die.

Never Say Die was a racehorse. A racehorse born in Lexington, Kentucky in 1951. A difficult birth as it turned out resulting in poor breathing, as was the custom in those days to clear phlegm the foal had a shot of whiskey poured down his throat. By the next morning the animal had survived and was thus named Never Say Die.

Three years later Never Say Die was over in England racing and after some small successes was entered into the Epsom Derby. No American horse had won the race in over 70 years so was given odds of 33/1. In front of the Queen, Winston Churchill and, randomly, Errol Flynn he galloped to success, ridden by an 18 year old Lester Piggott.

As if that wasn’t enough there was a young woman in Liverpool who was so inspired by the story of Never Say Die she pawned all her jewellery and put the lot on the horse to win the Derby. With her new found riches she bought herself a large house and turned it into a club she called The Casbah.

Deciding she needed some live music she turned to her son Pete Best and his friends, Paul, John and George with their band The Quarrymen. They played some of their first gigs there as a band and after Pete was replaced by Ringo they continued to play many gigs there under their new name. It has been said that without The Casbah there would be no Beatles, and it is definitely true that without Never Say Die there’d be no Casbah Club. I’ll let you draw the rest of the lines.

Good brand story huh? But where does it fit into the brand? Well the farm where Never Say Die was born is owned by company founder Pat Madden. Oh and the idea for the brand was conceived when Pat and David were at the Kentucky Derby together.

So we’ve dispelled the myths, we’ve told the lovely story, time to find out if it is any good to drink.

The companies Brand Ambassador Dan Priseman (many of you will know him from such American Whiskies as Four Roses, Uncle Nearest and Whistle Pig) was on hand to lead the tasting. He had brought along a little treat in the form of a sample of the whiskey taken from a barrel before it goes on the ship across the pond. 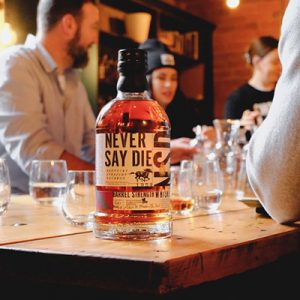 It was good stuff but still a little rough around the edges, the group agreed it could do with another couple of years of ageing in the barrel. From there we moved straight onto the Never Say Die Barrel Strength Whiskey, there will be a Bourbon and a Rye coming soon but for now each release is a cask strength single barrel, in this case Barrell #2 (the British Bourbon Society grabbed Barrell #1).

Now whilst it wasn’t a barrel for barrel comparison the difference between the non ‘sea and UK’ aged whiskey and Barrel #2 was vast. Those rough edges had been mellowed and even at 54.6% it was a very smooth drink. The mash bill for all of their whiskey (except the rye) is 75% corn, 21% rye and 4% malted barley and this high rye content really came through and gives the whiskey a superb backbone.

Now sea ageing isn’t exactly a science (yet) but the theory makes sense and goes like this – as the barrel is on the ship the movement of the sea basically forces the liquid to interact with the wood constantly, imagine shaking a barrel non-stop for six weeks. However, as Dan pointed out, the ageing time in the UK is not to be overlooked either.

From there we tried the barrel #3 release punching in at 55.4%, whilst it had the same DNA as the #2 it was markedly different. Both would work fantastically in cocktails or as a sipper but for me #3 is the one.

To show how different each barrel is Dan had randomly selected three to open for us to try. The colour alone showed what a varied selection of barrels and liquid they have at their disposal. Again all shared the same DNA but, and bear in mind they all had the same mash bill, made by the same distiller and aged for the same amount of time in the same rickhouse, the variation in colour, taste and remaining liquid levels in the barrel was huge. If you ever happen to hear they have bottled barrel number 650 grab it, immediately.

It was a great day and I walked away with a very different impression of the brand than I had going in. It isn’t all tricks and marketing hype, they do everything for very good reason. Is it a British Bourbon? I don’t know and if I’m honest I don’t really care. What it is, is a great tasting American Whiskey with an excellent story made by some lovely folk. If you want to give it a try yourself, and why wouldn’t you, you can drop Dan an email to Dan@n10bourbons.com