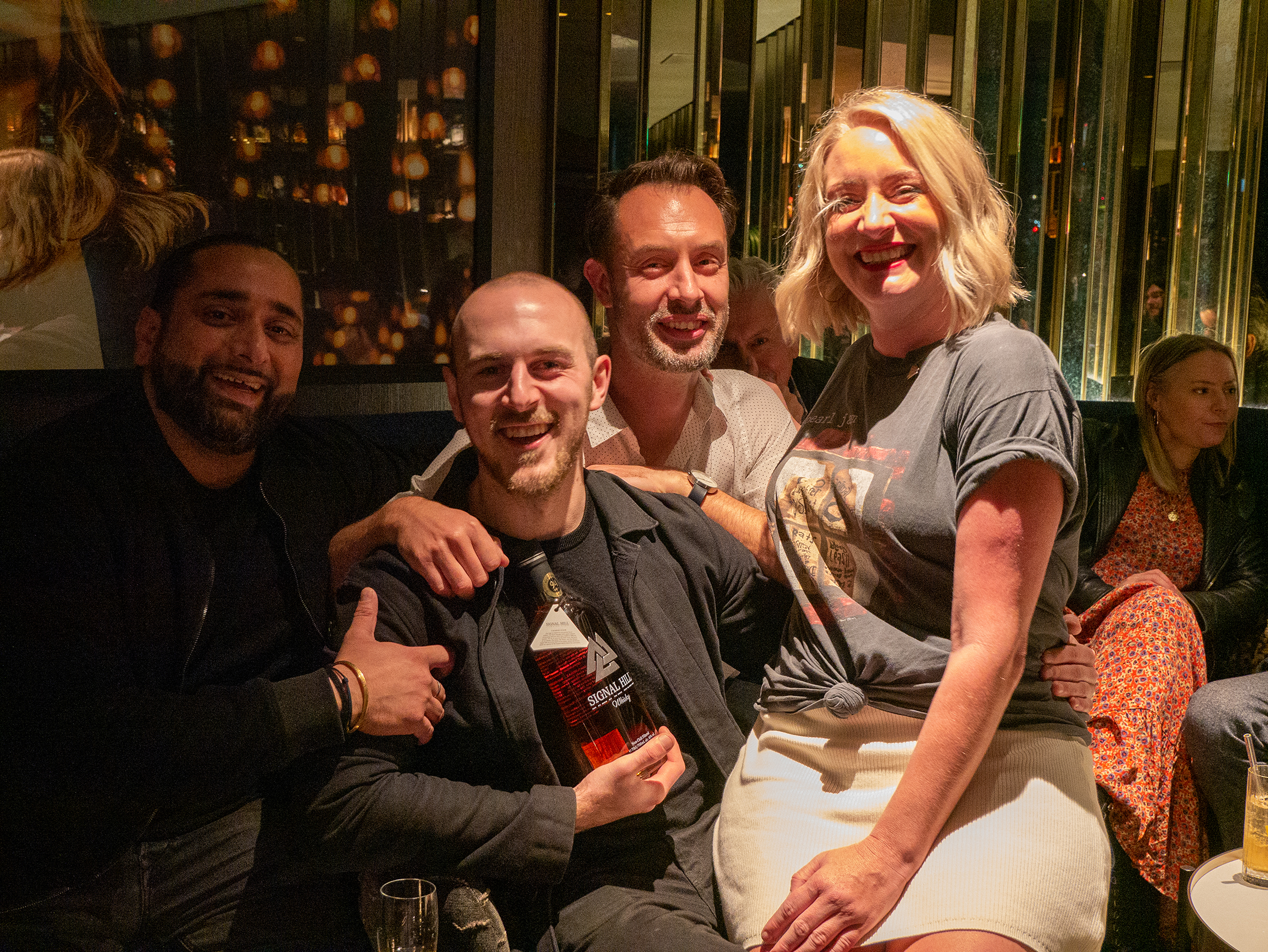 On Tuesday this week, eight bartenders gathered at Hotel Amano in Covent Garden to take part in the final of Signal Hill’s first cocktail competition, which tasked the competitors with making two drinks – the signature cocktail which formed the basis of their entry, and a second ‘mystery ingredient’ drink which would need to be improvised at relatively short notice, and with a trip to Canada and £1000 in cash going to the winner, it’s fair to say there was a mix of excitement and nerves evident in the room as proceedings got under way.

The judges – Richard Wynne (Callooh Callay group honcho), Sophie Bratt (Nobu bar manager), and PJ Jaurre (Signal Hill global ambassador) took their seats, and Lottie Bernard of the Domino Club in Leeds, whose name came out of the hat first, took to the stage. Lottie’s drink ‘Out East’ took inspiration from the Toronto Cocktail and took the form of a very classy-looking stirred down sipper, garnished with a Chartreuse Elixir spritz.

Next was Felix Cohen who had travelled from his bar, Daisy, in Margate. Felix took inspiration from Canada’s Thanksgiving Day, which he described as being “about being grateful for the harvest”, and also love of fresh fruit shared with his Canadian girlfriend’s parents. The resulting ‘Apple A Hay’ long drink was fruity and delicious.

James French of Clockwork Rose in Bristol followed, and put in what I think is probably the most composed first-competition performance I have ever seen. James’ drink was inspired by a dessert at a gelato joint in Bristol, which was delivered in the calm and confident style of someone who has competed many times. Keep and eye out for James next competition season…

Jenny Griffiths of Distill & Fill in Swansea came to the bar next, with a drink that followed her bar’s style of serving premade cocktails. The theme for Jenny’s presentation was ‘reconnection’, which fit nicely with both Signal Hill’s recent roadshow of masterclasses, and the history of the actual Signal Hill, which was the site of the first transatlantic radio transmission – Receiving Signal was a very fitting name for this cocktail.

Krya Elton, representing Happiness Forgets in London, was up next. Kyra built her entry around the similar climate that Newfoundland and the North of England share, and used ingredients common to both places. The drink was named Dot Dot Dot, the Morse Code signal for the letter S, which of course fitted a Signal Hill cocktaul perfectly.

Josh Black was competitor number six, with a drink themed around transatlantic ingredients, which combined Signal Hill with some of Ireland’s finest peated whiskey. The resulting carbonated long drink was an absolute belter.

Next up was Joseph Theo Millar of the Cocktail Service in Bristol. We’ve judged Joseph a few times this year, and would describe him as an extremely brave competitor who always looks to explore an unusual or ‘out of the box’ interpretation of the competition brief. This entry was no exception, and followed the recipe structure of iconic Canadian dish, Poutine. It’s not every day you see cheese curd in a cocktail…

The final bartender in the first round was Calum Willis of Gleneagles Townhouse in Edinburgh. Calum was another first time competitor who acquitted themselves extraordinarily well, with a drink taking inspiration from the first non-stop transatlantic flight which took off from Newfoundland in 1919.

Mysterious but not weird

After a quick pizza break (the best kind of break?) the second round began. There was a trend a few years ago to include an extra difficult or challenging ingredient in mystery box rounds, with the thought that it was somehow funny that one bartender got lumbered with the ‘short straw’. This always seemed unfair to me, and the Signal Hill team obviously share this impression, as they made sure each of the surprise ingredients had been selected to work with or compliment Signal Hill’s flavour profile – things like ginger bread syrup, or hazelnut liqueur. The result was a proper, real word, test of the bartenders’ ability to make a good drink on the fly, and I can honestly report that the 8 drinks which came out of this round were delicious – definitely the best round of mystery box drinks I have tasted so far.

When the mystery round finished, the judges retired to do their thing, and the competitors (and I) retired to the hotel’s roof terrace to enjoy a Signal Hill Highball or two, and a stunning nighttime view across London. Upon returning, the judges thanked everyone for their efforts and PJ Jaurre did an excellent job of announcing the winner by way of a few cliffhanger-pauses which really ramped up the anticipation. But, as ever, there could only be one winner, and it was Josh Black of Sliverleaf Bar who bagged the prize of £1000 and a trip to Canada.

Congratulations then to Josh, and also to the rest of the competitors who all performed extremely well, I really enjoyed your drinks and presentations. Kudos must also go to the Signal Hill team who went out of their way to make this a really fun and rewarding experience for everyone involved – this was a hell of a first competition, thanks for looking after us so well.