The Hepple Ultimate Martini judging tour moved its way south to Manchester for the second heat.

As I made my way to Hawksmoor I felt very clear headed and pretty smug, I had managed to have a night out in Manchester without ending up in Bunny Jackson’s enjoying myself a little too much. I had been well behaved with the knowledge that today I would be judging 12 Hepple Martinis from some of the North of England’s finest bartending talent. 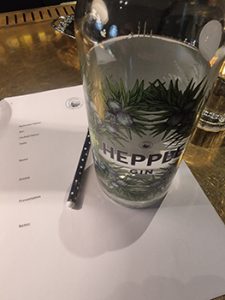 As the room started to fill with the day’s competitors my fellow judge, Hepple founder Walter Riddell, entered the field of battle. Walter describes himself as the farmer of the team behind Hepple, but that belies his fantastic pallet and love of a martini, a love that was to be well looked after.

With Hepple Gin & Tonics in hand and batched martinis in the freezers the competitors were briefed, and my first martini of the day was just five minutes away. Each of our 12 competitors were being judged on their drinks taste, aroma and name as well as their presentation skills.

Now at this point what we usually do when writing up a competition heat is pick out some highlights before focusing in on a few competitors who shone. Not today. The level of competition on this given day was so strong everyone deserves a shout out. So here goes.

We kicked off with a trio of Leeds bartenders starting with Jordan Cornelius from Tattu, his Amongst The Pines serve was a great classic style martini to kick the day off. The pine notes of Hepple were turned up and he was an early contender for line of the day when he hoped the ‘Super Critical Distillation didn’t result in super critical judging’.

Alexandra Fryday from The Domino Club was next up with a twist on a Dirty Martini, much to Walter’s joy. The olive oil fat-washing not only gave a superb mouthfeel but, along with the rosemary, really upped the Hepple flavours in twist on a much derided classic everyone would enjoy. The last of the opening Leeds triple header came in the form of Paul Hudson from Smokestack who had also gone down the dirty route, but his twist was replacing the olive element in the classic with red wine which, as well as making a tasty drink, gave it a fantastic colour and aroma.

Our first Manchester entrant of the day was representing Schofield’s Bar, Conor Knowles flipped the cocktail comp traditions on their head by serving us his drink at the start of his presentation. His drink was focused on three main elements Hepple, celery and water. His celery seed distillate and addition of a celery garnish both brought the drink to life and his presentation around the importance of water was way more interesting that in may sound on paper.

Franklin Bouckley from 88 Bar in Ripon lit up the room from the moment he stepped behind the bar. His engaging chat based around James Bond’s love of a Vesper had everyone enthralled, with the name, Chapter 7 a nod to Ian Fleming’s first mention of it in his books. Mecanica’s Phillip Aldridge was inspired by his trip to Hepple for last year’s final with his juiced rhubarb being smoked to signify the epic BBQ’s Valentine puts on. His presentation was the most perfect ode to the Hepple experience that even Walter wanted to go back and he’d only left a couple of hours ago, it must have made all the other competitors even more desperate for the win.

The first of three bartenders from Manchester’s Science & Industry, Dionysios ‘Leo’ Tzorouchof showed all of the flavour balancing his bar is famous for. His New Leaf cocktail cleverly allowed each ingredient, including sake, Axia and two homemade bitters, to come through whilst simultaneously joining forces to create a beautifully balanced martini.

Josh Howley from Smokestack in Leeds was the filling in a Science & Industry sandwich, but he didn’t let that stop his storytelling masterclass. His presentation which started with ancient Greek gods and guided us on a journey through all his ingredients to his final drink, Athena’s Martini (or Athenatini), was spectacular. As were his own brined olives which adorned his serve.

The final two Science & Industry layers started with Joshua Brown who had been foraging in Manchester suburb Ancoats for his martini ingredients discovering rosemary, mint and sage which were infused into sake. He also found oyster mushrooms on a separate forage which brought a big mushroom hit to what was a delicious drink. Dermot O’Neill was inspired by the first time he had Hepple, in a G&T whilst eating Ramen. This led his drink to have Asian flavours such as ginger and spring onion which worked surprisingly well with the Hepple and the black garlic oil drops gave a great aroma.

Our penultimate competitor came from The Domino Club in Leeds. Lottie Barnard in her own words is ‘not capable of making a drink without veggies in it’, in this case it was the humble carrot which inspired her, or more specifically the carrot tops. Of course the carrot tops, importantly, help with sustainability but, more importantly, the flavour they imparted into the drink was spectacular. I’ll be talking about that martini for a long time.

Last up was the hardest working person there. Douglas from Hawksmoor had not only been helping all the competitors find what they needed he’d also been serving G&T’s to all AND making drinks for a normal lunch shift. How he had time to also compete is beyond me, let alone in such a calm, informative and funny manner, oh and it was his first comp. To top it all off his serve, a twist on the first martini he learnt to make, the French Martini, was delicious.

I was a super strong heat and we had the job of picking just two to go through to the final at the Hepple Distillery in July. It was tough, in fact it was so tough that in the end we made the call to put three through.

Take a bow Lottie, Conor and Dionysios. A fantastic trio that are going to give everyone else a run for their money in the beautiful surroundings of Northumberland. Huge congratulations and thanks to everyone who competed, everyone there did themselves and their bars proud.

Also massive thanks to the Hawksmoor team and in particular Douglas for looking after us so well. Cask Liquid Marketing’s Owen Neary for being a legend all day and of course the Hepple team for putting such a great comp on.

Next up London, but first have a gander at these winning specs.

Garnished with a cut Celery Stick.