Seven bartenders produced one of the best finals we have ever seen as they fought for the right to represent the UK at the Global Final in Ibiza.

We knew, after the three heats across the UK, that the standard of the UK final for this years Gin Mare Mediterranean Inspirations competition was going to be tough. What we didn’t realise was just how much everyone was going to up their game and how difficult the final decision was going to be.

For those unfamiliar with the competition here is a quick round up. Each year bartenders from around the globe battle in their local markets for the opportunity to head to Ibiza and win the £3,500 top prize and huge bragging rights.

Each bartender must make three drinks: a Mare Nostrum serve (inspired by the mediterranean values), a twist on a Gin & Tonic and an annual special, this year a drink inspired by the egg. It is a great few days but a tough competition, highlighted by the fact the UK has never won it. A blip that we want to put right.

BarLifeUK has been lucky enough to be involved with this competition for many years and always look forward to the thought, imagination and effort that is put in to the competition and the high level of drinks that are produced. With the egg inspired serve this year we didn’t know what to expect (and were a little nervous) but we needn’t have worried, UK bartenders once again proved their skills.

From the moment that Clare Morrow stepped up to begin her presentation at Searcy’s we had a feeling it was going to be a tough decision for the judges, and they certainly earned their free drinks on the day. Joining BarLifeUK on the panel were Gin Mare’s Brand Activation Manager (and average pool player) Jorge Balbontin, après-ski enabler and all round bartending star Stu Bale, the Lover of Cocktails Sandrae Lawrence and Searcy’s own head chef Franck Jeandon.

A formidable line up which would put most people off their game (especially when combined with what could generously be described as an event bar to serve from), but not our magnificent seven. They also had plenty of support from the crowd, including their fellow competitors and the ever growing CASK Liquid Marketing team. 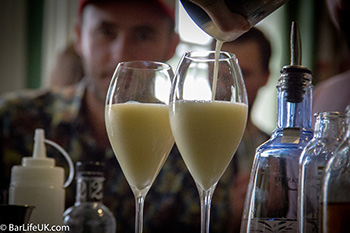 Speaking to Stu Bale after the final competitor had done their bit we discussed just how impressed we had been. Not only had every competitor come in under time (with 5 of the seven finishing with 15 seconds of the 12 minute time limit) but each had produced at least one drink that was exceptional. Exceptional enough that a Scot and a journalist would happily pay for another one!

Clare, who is from Mojo, Leeds, kicked us off with a very refreshing G&T twist using peach which was just what the judges needed to whet their pallets. However it was her egg inspired drink that stood out, not only visually with a quails egg full of lemon oil, but also in flavour (with Yellow Chartreuse and pear juice matching perfectly). As it was passed back through the crowd the other competitors realised, if they hadn’t already, it was going to be a tough day to come out on top.

Leeds had represented well in the northern heat and they stuck together in London with The East Village’s Jo Last jumping up second. She looked and sounded every inch the experienced pro, not someone who had competed in their first competition earlier this year and once again it was the egg cocktail that stood out. An infused duck egg complementing the tea and fruit base for a drink that would sell by the paella dish on a Spanish beach.

Matthew Cusworth from Hoot the Redeemer in Edinburgh gave a masterclass in how to link a story and ingredients together with his Montserrat cocktail. Inspired by a visit to the Spanish mountain of the same name, the ingredients featured local Catalan rose wine and vermouth with muddled fig. The drink, accompanying presentation and even video, really encapsulated all of the mediterranean feel that Gin Mare inspires in it’s flavour and style.

Peg & Patriot’s Hamish Hasketh had the most elegant serve of the day with his Mare Nostrum drink, The Atlantic. All of his drinks were superbly balanced but The Atlantic stood out for the clever use of simple yet obviously mediterranean ingredients; Gin Mare, amontillado sherry, verjus and salt water solution. Served up with oysters in elegant miniature mixing glasses it had Jorge in particular swooning.

Fede Johnson from Hawksmoor was the most experienced with this particular competition and his presentation really stood out, especially it’s link into his own mediterranean background and family. It was his Grandma who inspired his egg inspired serve, T Nana’s Sunset, and we have no doubt she would have elbowed the judges out of the way to get hold of the drink bearing her name. He also won a bet with his brother with his superb Going Med drink which included a jabugo ham fat washed Gin, enjoy that slap up meal Fede.

Robyn Wilkie has recently had a promotion in the Atherton Group but it certainly hadn’t distracted her from the job of upping her game for the Gin Mare final. We knew her two main drinks were superb from the heats but it was her Gin & Tonic twist that stood out for us. Gin Mare can stand up to strong flavours better than most gins and by mixing it with Cocchi Americano and a nori tincture it highlighted some of the often neglected subtler flavours, oh and the fried nori garnish was delicious.

If Hamish’s was the most elegant then Panda & Sons Nikki Logan definitely won the imagination award for her egg inspired, Awash on the Shore. Throughout the heats we were impressed in general by the egg ideas but Nikki took it all to the next level. Not only was the drink served in  hollowed out duck eggs for each judge to crack open themselves, but the whole drink was washed with egg white. It was imaginative, it was fun and above all it was tasty. What a way to end the presentations.

It was a true testament to just how fantastic the bartending scene across the UK is, as well as to just how imaginative people are willing to get with the Mediterranean Inspirations competition. All seven of our competitors would have done the UK proud in Ibiza at the final, and we honestly believe they could all of taken out the Global win, however we had to pick the one that just edged it on the day.

A special mention was reserved for Hamish for his superbly balanced and drinkable serves, but in the end it was Robyn who did just that little bit extra to get her over the line. The judges were not only impressed with all of her drinks but also her confidence and presentation style, the complete package they were looking for.

As we all enjoyed some drinks on the roof garden, as the Gin Mare evening party started to warm up, there were no signs of annoyance at the decision from the other competitors. They had all seen each others presentations, all tasted each others drinks and they knew just how high the standard had been. In fact those that weren’t working all went out together and by all accounts had a great night.

We will of course be bringing you all the news from Ibiza on how Robyn gets on at the Global’s (she only gets given her return flight ticket if she wins though) so keep an eye on BarLifeUK. The usual but much deserved thanks go out to the other competitors, the supporters, the bars that have hosted us, our various judges and of course Gin Mare and CASK Liquid Marketing.

Robyn’s drinks are below and if you want to check out the other finalists creations (and we strongly urge you to do so) head to the UK Heats story here.