The egg-travaganza that is this years Gin Mare Mediterranean Inspirations competition has it’s finalists following 3 heats across the country.

Gin Mare Mediterranean Inspirations is a competition like no other. No other competition we judge each year produces such diverse drinks, such interesting and varied ingredients and such imaginative serves. Gin Mare is a unique and complex gin and it seems the UK bartenders love to celebrate the opportunities it affords to get creative.

It is fair to point out that the prize of a trip to Ibiza and the chance to win £3,500 also helps the excitement, however it is definitely the gin itself that make the drinks so much fun to judge.

Across our three heats, in London, Manchester and Edinburgh, each competitor had to produce two cocktails. One was inspired by the Mediterranean, specifically the lifestyle, cuisine, climate and that unique promise of escape. The second, and the new element for this year, had to be inspired by the egg.

Held in Cartizze Bar, we kicked off with the London heat which quickly became known as the Oyster heat. In previous years the food matching has been a big part of peoples serves, with platters of Spanish tapas often being wolfed down by the judges. We even once got served a whole octopus, but this year London upped the game with a series of competitors serving up oysters.

The judges, in particular Gin Mare’s own Luisa Halle’n, were very welcoming of the fancy slimy treats. Luisa was joined by CASK Liquid Marketing’s Stuart Ekins, Cristian from The Bull and BarLifeUK acting as mediator.

Oscar Carletti from Sexy Fish in particular nailed the oyster serve with his cocktail being served in little bags which had to be ‘burst’ over the oyster in the shell before being consumed, a very unique and imaginative serve with great theatre. MASH’s, Max Cruesot also produced and exceptional looking oyster serve which had camera phones whirring and wouldn’t have looked out of place in the most palatial Parisian restaurant.

Matyas Busek from Mr Fogg’s also wowed with his egg serve, with the drink being served alongside a beautifully presented hollowed out egg held in a silver glass. A special mention also needs to go out to Callooh Callay’s Chloe Natterer, who showed none of the nerves that should be associated with your first competition and knocked out two great drinks including a blue creation that would have had Jacob Briars having to excuse himself for a moment.

In actual fact the competition was so strong the judges had to increase the number going through to the final from two to three. In no particular order those that impressed the most with both their presentation and quality of their drinks were.

Robyn Wilkie from 7 Tales is rapidly becoming a force to be reckoned with on the cocktail competition circuit. Her natural ability to present plus her desire to go that extra mile with her research (the world’s biggest Locomotive Museum!) is being backed up by increasingly tasty drinks. On this occasion it was her Masquerade cocktail that caught our eye, with yoghurt and a carrot and saffron shrub giving the drink an amazing flavour and mouth feel.

Hawksmoor bartenders are no stranger to competition wins and Fede Johnson is no stranger to the Gin Mare competition. It was no surprise then that he put his head above the pack, however the fact he did it by using one of BarLifeUK’s least favourite tricks, in the form of fat washing the Gin Mare,  and making it taste fantastic as well as producing huge layers of flavour despite only containing only three ingredients.

Hamish Hesketh from Peg & Patriot was the oyster representative in the final three, however it was his use of salt water solution that really impressed the judges, in particular Stuart. It featured in both drinks but really stood out for us in his Atlantic serve, with amontillado sherry and verjus which put an hugely enjoyable twist on a traditional martini style serve.

It was a great day and every one of the competitors gave it there all, but it was only the start of our Gin Mare 2016 adventure.

The next morning we found ourselves at Euston station trying to find a breakfast offering that didn’t contain egg, to much of a good thing and all that, before we winged our way up to the Manchester heat which has previously produced some exceptional strong Mediterranean Inspirations winners. 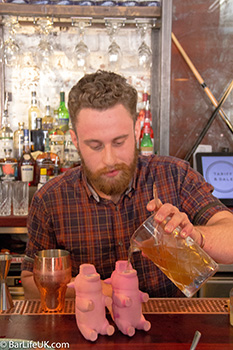 If the London heat was the Oyster heat then Manchester gave us the Lady heat. Gin Mare always, for whatever reason, resonates strongly with female bartenders across the country. When we arrived at Manchester’s Tariff & Dale we realised that this year was no exception, with two thirds of the competitors being of female persuasion.

The judging panel was equally weighted with Luisa being joined for this leg by CASK’s Jennie Rae Chuter and hometown hero Massimo Zitti from Cane & Grain. BarLifeUK was once again on hand to help out if needed.

The boys may have been outnumbered but put up a hell of a fight. Luke Robinson from HMSS in Bristol and Joe Macbeth from Rub Smokehouse in Nottingham produced amazing serves in the form of plastic pigs and a traditional Spanish guitar respectively. El Gato’s (and Rookie Programme alumni) Adam Day gave one of the best presentations across all the heats and had the judges and impressive supporting crowd hanging on his every word, as well as producing our favourite drink of the day.

Whilst the oysters in London were impressive they had nothing on Tariff & Dale’s Georgia Thresh who produced a whole menu, with each cocktail being served alongside at least two dishes of amazing looking Spanish tapas. Charlene Holt from Hawksmoor certainly won the award for best supporting cast, she gave them plenty to cheer about during her presentation and gave the judges plenty to smile about in her drinks, not least with the caviar stuffed olives garnish.

It was however Leeds that came out on top with both the winners coming from down the road. Jo Last from East Village showed how it was done with more Gin Mare branding than at the final in Ibiza. This was backed up with two superb drinks capturing the sunshine feel of the brand with the Farigola incorporating a lapsang and thyme infused duck egg white with summery ingredients which transported us to the Gin Mare Villa on the hills we love so much.

Mojo’s Clare Morrow kept the judges enthralled with a very relaxed and entertaining presentation whilst combining local and mediterranean flavours superbly. For us any drink that contains the superbly named pamplemousse is always on to a winner and when combined with Campari and watermelon juice the result was delicious, especially pleasing for Massimo was the Campari infused watermelon garnish.

Manchester always produces hugely entertaining heats and it once again didn’t let us down with everyone bringing their A game, it also produces big hangovers the next day so thankfully we had a bit of a break before the next heat.

We had seen the oyster and lady heats, so Edinburgh gave us the Overtime heat. Ask any of the bartenders competing to make you four drinks in eight minutes and they could do it with their eyes shut, however add in three judges staring at them, brand chat to remember and some idiot taking their picture every 20 seconds and suddenly it isn’t quite as simple.

Joining Luisa and Stuart on the judging panel was Simon Toohey who is a man on a mission, the mission is to make bartenders better and if he has to ruffle a few feathers in the process he’ll do it, for that we salute him.

The Last Word is one of our favourite Edinburgh bars and has hosted more than a few competitions we have judged, once again the staff were on hand to do everything they could to help out. The competitors were primed and we were ready to kick off the final heat and discover which two were joining the five other winners in the final.

The heat gave us some superb drinks presentations and some unusual ingredient ideas right from the start with Darren Flanagan from Tonic. His goats cheese infused Gin Mare cocktail was not only clever and unusual but amazingly tasty, a real highlight of the day for all the judges. Michael Mann from COLD had been unavailable for the London heat and so made his way up to Edinburgh to compete and didn’t disappoint with his Green Eggs & Ham cocktail which had an olive jelly garnish we could have eaten all day long.

The innovation continued with Paul Minea from The Chester Hotel in Aberdeen serving up a white chocolate coated olive alongside his cocktail and Clare Madden from Lebowskis in Glasgow who dripped egg yolk through an absinthe spoon into her egg inspired serve. However the top two managed to out do them overall.

Nikki Logan from Panda & Sons had so much going on with her presentation it’s difficult to know where to start. Her first drink was served on a board with sand, aromatised shells and more shells turned into headphones. That was nothing compared to her second cocktail that was not only egg washed once made but also served in whole duck egg shells for the judges to crack themselves into their glass before drinking.

Hoot The Redeemer’s Matthew Cusworth is not only a great bartender but has a huge talent when it comes to film making, he proved this by showing a video of trip he had made to Montserrat, a mountain in Spain. It was this trip and this mountain that provided the inspiration for a cocktail containing fig and local Catalan rose wine (a guilty pleasure of his) and vermouth.

Whilst it may not have been the strongest heat overall, Edinburgh produced two winners who could easily not only take out the UK final but the Global final over in Ibiza. In fact it must be said at this point we have no idea who is going to take out the UK crown next week in London but we do know whoever it is has a great chance of bringing back the trophy from Ibiza for the first time.

A huge thanks to all the bars who hosted us so graciously, to our hosts on the day Nick Caputo, Olly Foster and Simon Toohey. To all the judges and supporters who came along and of course to Gin Mare and CASK for putting on such a great comp and providing everyone with gin & tonics. Finally thank you to everyone that entered and all those that competed at the heats, we know a lot of effort goes in and it doesn’t go unnoticed.

Shake hard with ice, double strain and dry shake. Serve in a sherry glass with a roasted hazelnut garnish.

Stirred down and served in a small receptacle on ice with a small coupe on side. Serve with freshly shucked oysters and rosemary on the side.

Garnish with mini melon slice on the rim 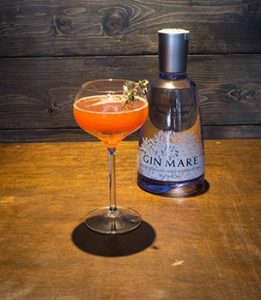 Stirred and served on the rocks in an old fashioned glass rubbed with fresh thyme. Garnished with a slice of Campari infused watermelon.

Stirred and strained. Served alongside the scent, touch and sound of the seaside

Awash on the Shore

Stirred and washed with egg white. Garnished with an orange disk.

Muddle fig into Gin Mare, add all other ingredients, shake and double strain over cubed ice. Serve in a jar, with slice of fig and rosemary sprig garnish.

Shake and double strain into coupe, spray outside of coupe with absinthe. Serve with small bowl of Arbequina olives