With mediterranean botanicals such as basil, thyme, rosemary and arbequina olives prominent in Gin Mare it is no surprise that food has always been an important part of the experience in Ibiza, and the competition in general. This year however the team behind the gin, Vantguard, really took it to a new level. 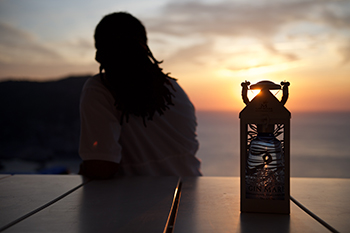 More Than A Competition

Whilst the centrepiece of the trip is the competition itself (more on that shortly), Gin Mare have always ensured there is much more on offer for the competitors. In previous years this has revolved around the island, be it the luxurious Villa Mare that is home the competitors with it’s infinity pool overlooking the ocean and mountains, dinners in fantastic restaurants or nights out in Ibiza’s famous clubs.

This year, whilst there was plenty of the above, a series of talks and seminars also took place at the villa to inspire and educate the finalists (and any journalists lucky enough to be there). The speakers were a mix of bar and kitchen professionals, who each had a speciality subject. The passion with which they all spoke drew everyone in.

Chef Aitor Olabegoya kicked things off with a presentation on the art of sous vide. As well as the science of the process, Aitor was full of tips and examples of some of his creations which was just as well as the technique would be at the heart of one of the later challenges. The talk ended with a gift of a sous vide machine for each competitor alongside their pages of scribbled notes.

There was also a knife sharpening workshop which somehow made the slicing of a piece of A4 just about the most satisfying thing in the world. We mentioned passion earlier, and David Reartes, a chef from Ibiza, really wore his love of the islands Black Pig (Porc Negre) on his sleeve and once we tasted the ribs it was easy to see why.

At the end of the day Gin Mare is still a booze brand however, and there wasn’t a shortage of learning in this area either. Andrea Tsanos (who some of you may remember from his time in London) gave a fascinating chat about his bar in Ibiza and some of the ingredients and techniques that have inspired him.

Dean Callan spoke about….. well Dean Callan, the story of his life was inspiring and funny, and provided the group with plenty of ways they can improve themselves and their career alongside a real lesson in how to get to the top of our industry. He even managed to get in how he set the fastest ever Rematch Beyatch time. From Paris, Oscar Quagliarini imparted his knowledge on the importance of aroma, as well as bartending Oscar is training as a perfumer and his insight into the combination of these two worlds was fascinating.

It was just as well the speakers were so engaging because with picture postcard views and Gin Mare & tonics in hand it would have been easy to drift away, thankfully there was plenty of downtime to spend doing just that, as well as enjoying the pool.

The main reason everyone was there, however, was the competition. Mediterranean Inspirations is a competition that never stands still, it always evolves and pushes bartenders skills and pallets, this year was certainly no exception.

The competition started with one of the drinks that had got the competitors to Ibiza, the brief was a Gin Mare cocktail inspired by the artichoke, a brief that was taken in many different ways. The drink had also be paired with a dish courtesy of the foodpairing.com chefs

The competition was kicked off by Gavin Koehn from the US, a natural presenter and storyteller, who had used the Red Snapper as his inspiration but replacing the tomato juice with an artichoke heavy gazpacho. Italy’s Valentina Serio told the story of how Zeus turned a nymph into an artichoke in a fit of jealous rage, it was a beautiful looking drink topped with a Cynar foam.

Clemens Dietrich of Germany went for a martini twist using artichoke, lemon peel and mint to flavour the classic serve alongside another Mediterranean Inspirations classic ingredient, salt. Also from the US (West Coast this time) was Edwin Cruz who went all tiki with both ingredients (coconut milk and orgeat), as well as his serve, a hollowed out artichoke.

From France, Romain Golovko gave us a Ramos Gin Fizz twist with a artichoke heart syrup, described by the man himself as ‘a cloud of happiness & freshness’. It was the local hero, Portugal’s Daniel Carvalho, who had the nightmare journey with his baggage getting lost in route, a quick session in the kitchen with the chefs and a new recipe was created using ingredients from his food matching dish. In a show of the camaraderie and friendships this competition always brings when his bag turned up the next day it was decided by the finalists that he should get another go on the stage to make his original drink for the judges.

In the midst of the professional and funny presentations, the interesting flavours and ingredients, the clever food and drink pairing, came the UK’s Jo Last from Leeds. Last year Jo narrowly missed out on qualifying from the Northern UK heat of the competition, however this year as soon as we saw her initial presentation in the Manchester heat we knew she was a serious contender.

Despite only having to make one of her three drinks, which had been designed to tell a story when presented as a whole, she wasn’t fazed. If anything she had saved her best presentation for the final, based around the inspiration for her drink, The Heart. Due to the location of the comp the judges sit away from the bar making trying various elements tricky, Jo had this covered with little packs for each judge containing aromas and tastes of key ingredients for them to try as she presented.

Little touches and great presentations will only, however, get you so far. It still comes down to the liquid in the glass. Her drink was every bit as good as when I first tried it, which is no mean feat with the extra pressure of your first global final. The Heart is a combination of Gin Mare, rose and milk thistle tea, pineapple and maple that ensures you can taste each and every ingredient.

Jo was happy, the UK team, including the CASK Liquid Marketing gang, were very happy, it was a great start in the bid to retain the title Robyn Wilkie had won last year.

A (very large) Pinch of Salt

As we alluded to earlier, there was more to this competition than a classic cocktail making round. Day two saw the competitors split into 2 teams, Meat & Fish, and head to a local market with a chef on hand. The challenge was to come up with a tartare and match it with a cocktail, salt and sous vide technique also had to be used.

The setting for the presentation of this round was the surprisingly beautiful salt flats on neighbouring island Formentera (which involved a ferry journey some found relaxing and others found a little more….. green gilling).

Over looking pools of water and salt whilst men collected the salt using big nets on a rod (who knew!) the competitors set themselves up. Whilst we were distracted by the fact salt really does look pink and tasting it straight from the water (it is pretty salty), the teams got themselves set up.

With a pretty strict time limit the chefs helped the teams prepared 40 serves of the tartare as the other team members knocked out 40 serves of their matching cocktail. It was an impressive feat on a small event bar with everyone asking questions and various cameras being pointed in their faces.

For us it was team meat (which included Jo) who had the slight edgy on their drink but there was as many people who disagreed with us as agreed, so it was presumably a tough decision for the judges.

It was understandably time for a little bit of a break for the competitors so we decided to very unselfishly give them some room by heading to an amazing fish restaurant, feeding ourselves and knock back some Rosé.

The competitors had to wait until the following day to find out who had come out victorious and a brief chat with a couple of the judges confirmed our observations, it was very close. This year there was just one winner, no second or third prizes, just one would be victorious and that one shall win a culinary course at a top school in their home country worth up to €6,000.

With Gin Mare & Tonics in hand the crowd gathered to hear the result, people had their guesses and no-one was surprised (with the possible exception of the winner themselves) when the words ‘Jo Last, UK’ were read and greeted by whoops and cheers from not just the UK team but many others around the villa. Jo had not just made a positive impression on the judges but also her fellow competitors and the extended Gin Mare family who were genuinely very happy for her. 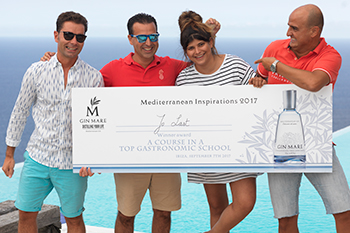 So much of an impression in fact that Jo was ceremoniously pushed into the pool as soon as the pictures were, at least half, done. You only get pushed in a pool in Ibiza if people like you, just ask Ali Reynolds, at least Jo didn’t have a phone in her pocket!

Jo performed superbly and there is no doubt that her win was thoroughly deserved, there is also no doubt, in my mind, that this will not be the last you hear of Jo Last.

I’m sure Jo would like to join me in thanking Gin Mare and the Vantguard team for an amazing few days in Ibiza, each year I think they are going to be unable to top the previous one and each year they surpass all expectations. Also thanks to the CASK Liquid Marketing team for running such a great comp in the UK and letting BarLifeUK get involved.

As for next year? Well who knows what Gin Mare will have in store but the one thing is for sure, it will be amazing and the UK will be hoping to defend their title…… again.