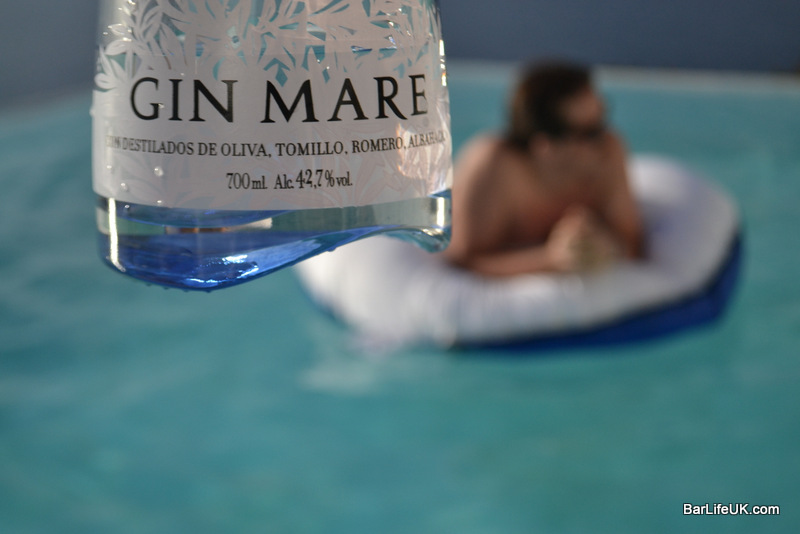 You know life is good when you find yourself judging a cocktail competition in Ibiza overlooking the sea, basking in sunshine.

So it was recently when Gin Mare held the finals of their hotly contested Mediterranean Inspiration Cocktail Competition at a private villa on the world’s biggest party island.

Over the past 6 months bartenders have been battling it out at a series of regional heats to get themselves a seat on the plane, alongside Sharon’s Hen Party and Kev’s Stage Do, to one of the coolest UK finals BarLifeUK have ever been involved in.

The aforementioned private villa was one of the most extraordinary competition venues I have ever witnessed. 10 palatial bedrooms surrounded a huge outdoor deck complete with 3 bars fully stocked with Gin Mare and everything else needed to keep a group of drinks industry degenerates happy and lubricated. The deck overlooked the beautiful Mediterranean Sea and tree covered hills and came complete with an infinity pool that would have made Hugh Heffner blush.

After a couple of hours settling in (or sunbathing as the case may be) we were treated to a masterclass by Gin Mare Brand Ambassador Jorge Balbontin on Gin Mare and the Spanish cocktail scene. Jorge knocked out some corking drinks and gave us a sneak preview of a new brand which will be hitting the UK shores soon – keep an eye on BarLifeUK for more.

With the day’s work done it was time to return to the sunbathing and first foray into the pool. I was beginning to get the idea this wasn’t going to be the toughest trip I had ever been on.

Day two was where it got real for the competitors. They had to re-create the two drinks which had got them to the final plus a Gin & Tonic twist to a panel of judges consisting of Stuart Ekins from CASK Liquid Marketing, Jorge, Jennie Rae from BarChick, Sam Fish from Mojo, Leeds, Laura Foster from Imbibe and BarLifeUK.

Up for grabs was the opportunity to represent the UK in the global final two days later which meant an extra two days in Ibiza. The losing 5 were back home on a plane the next day…. or at least that was the theory.

The competition really came to life in this gorgeous setting. The competitors fed off their opulent surroundings and whilst the nerves were still somewhat evident the presentations all thrived in the sunshine and sea air.

The drinks had obviously been great in the UK heats to get them to the finals but drinks designed to a Mediterranean theme really came alive in the sun. In fact the only issue on occasions was getting the cocktail off the judge next to me before they finished the whole thing!

Although the finalists had us all laughing (especially Dave) it was my fellow judge Jennie who got the biggest of the day. When a particularly chilled out tune came on the stereo she casually said to no-one in particular ‘This song reminds me of child abuse’. Take a bow for quote of the trip.

The winner from the very strong group not only gave us great banter (some in Spanish) and drinks, but also served some fantastic food matching along the way. Our UK representative in the Global Final would be Dee – a well-deserved winner all round.

The night saw us out on the town in Ibiza with a trip to the famous Space nightclub which was holding its regular S&M night just to spice things up. It’s not often you see a lady in full latex body suit including mask riding a mechanical horse – I didn’t see any signs but I’m assuming the night was sponsored by Talcum Powder. I won’t go into too much detail about the night that unfolded but needless to say a lot of Gin Mare was consumed and lots of dodgy dancing unleashed .

In fact such a great night was had by all that Dave, Susie and Toni all missed their flights home (too be fair to the girls only Dave was at fault) and Becky extended her stay at approximately 5am, around 4 hours before she was due at the airport. With Lee already planning an extended stay everyone got to enjoy some more Ibiza sun.

We have said before on BarLifeUK that it’s the group of people that really make these trips special and this was no exception. With a group consisting of some on their first overseas jolly (sorry competition) and some more experienced hands, everyone bonded exceptionally well.

I look back on those two days and my overriding memory is one of laughter, lots and lots of laughter, plenty of ribbing (any gin in that Becky?) and memories that will never leave me (such as a mass fruit fight in the pool which combined with lots of spilt G&T’s almost lead to a Guinness Record for the world’s biggest punch).

It wasn’t just the competitors to thank for that however. I know they all would like me to thank Stu and Sarah from CASK, everyone at Gin Mare especially Jorge, Joe, Alex, JC and possibly the most unsung hero of the whole trip Gemma. Together they all helped to make it, to quote Becky, ‘Such a lovely time’.

Of course this is only half the story, the finals were still to come and you can find out what happened there as well as news on one of the best bars I have ever been to next week at the same bat-time on the same bat-website.

In the meantime here are Dee’s winning drinks to whet your whistles: