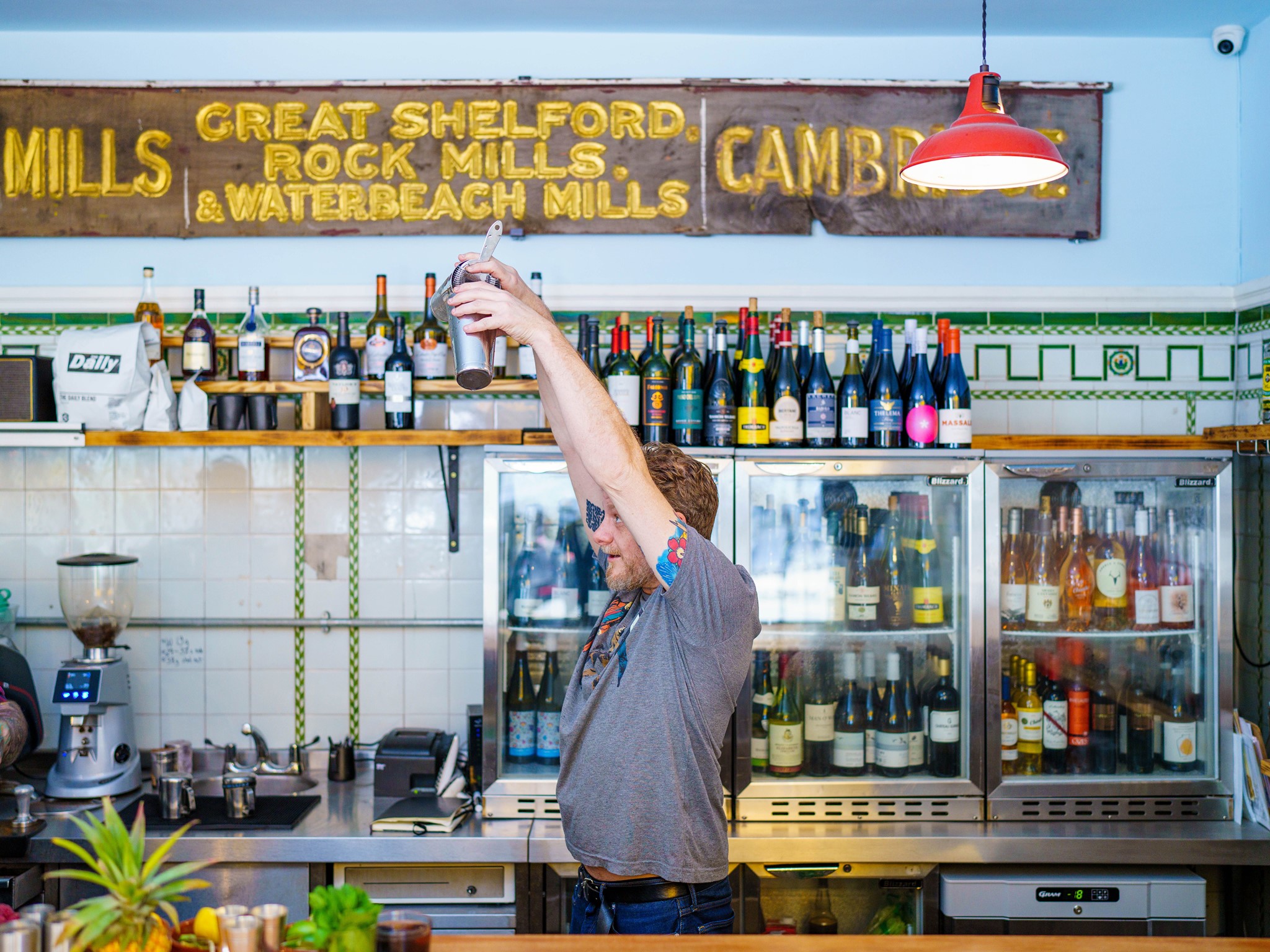 “It’s fucking hard, more people have walked in space than have successfully completed the Master Of Wine.”

Stuart Hudson, or Stu ‘Holiday’ Hudson, as he is known to some of a certain age, is a vastly experienced bartender and consultant, who at a certain point in time could quite have reasonably claimed to be the fastest gun in the West. We would characterize Stuart as one of those bartenders who turns encyclopedic knowledge into fun drinking experiences, rather than using it to create laboratory-style cocktails. He’s also one of the glorious nutcases who launched a new venue during the pandemic, in the form of Bar Liber which opened its doors in Islington, last Summer. We caught up with Stuart this week:

BLUK:  How would you describe Bar Liber to someone who hasn’t visited it yet?
SH: Basically it’s a friendly neighborhood wine bar. The tag line for Bar Liber is making wine fun again, we want to showcase the world of wine, not just by-the-glass, the rich history of mixing with wine, all the different styles of cocktails you can make, it’s endless. So it’s anything to do with wine, a lot of our spirits are finished in wine casks, we’ve got around 30 vermouths, that kind of stuff. Making wine fun again is the easiest way I can describe it.

BLUK: That leads me to my next question, when I think about you, cocktails and Trappist beers come to mind as your specialist areas, so what made you open a wine bar?
SH: Wine has always been my real true passion, cocktails and spirits have always been my playtime kind of thing, from the earliest onset of my career wine has been the thing I have pursued, through courses and things like that. When I was 16 I was working as a glassy in a pub at weekends, and that’s when I made the decision I wanted to go into hospitality as my career. At that point I learned about the Master Of Wine, which is the hardest to obtain degree on the planet, and it’s our industry. So I thought that’s what I want to aim for.

BLUK: Have you achieved that yet, are you a Master Of Wine?
SH: Not yet, touch wood, it is still high on my list of things I want to achieve. But it takes years, Dawn Davies says you need to dedicate seven years of your life to it. It’s fucking hard, more people have walked in space than have successfully completed the Master Of Wine.

BLUK: If you look at the bartending landscape, what do you think the average level of wine knowledge is?
SH: Generally it’s getting a lot better. It can be incredibly daunting, it’s such a vast subject and growing on a daily basis. The amount of shit you need to know if you want to go down that rabbit hole is immense. If you are a cocktail bartender, I think Level 2 WSET will get you a really good grounding, and will serve very well in a bar environment. But it can be daunting, learning how to taste properly and all of that. The process of production can be quite a bit more daunting than that of beer and spirits. But more people are getting into wine, bartenders used to be drinking mostly beers and cocktails, but now you’re seeing them ordering wine when they are out.

BLUK: You mention WSET Level 2, which is both training and a qualification, but if a bartender wants to learn about wine outside the classroom, where should they look?
SH: Hands down the WSET is going to be the best for you… But other than that there are some very cool books, there’s the World Atlas Of Wine, which comes out every five years, they do a new one because everything changes, you can get the Oxford Companion To Wine. For some really interesting but simplified stuff there are the Wine Folly Books, they are really good and they have lots of info graphics and pictures that are a lot easier to digest than mountains of text.

BLUK: When you are buying for Bar Liber, how do you choose your wines?
SH: Does it taste good, and would I order a second glass… It’s the same a spirits, you go to tastings and trade shows, and you get reps that call in to do tastings. The process is pretty much the same as it is with spirits.

BLUK: A wine-challenged bartender comes into Bar Liber, what do you serve them to make wine fun again?
SH: Probably a fuck ton of stuff! Everything we do on the mixed drinks side of things has to have 2 grape-based ingredients, our biggest selling cocktail is the Pisco Punch, Pisco being grape brandy, with Champagne, that’s our two grape ingredients, a pineapple marinade, a little bit of lime, super simple but a lovely crisp, refreshing, grape-y style drink. And then whatever the staff picks are, we always have a staff pick of the week, white wine, red wine, vermouth, and we all get together and taste those and say ‘let’s push this’, so generally we would lead them through some of those. That’s how I’d do it.

BLUK: One last question, where does Bar Liber get its name?
SH: Liber was the Roman god of wine, viticulture, fertility, and freedom. And the freedom and wine thing is what we’re trying to push in Bar Liber. Interestingly enough, he predates Bacchus, and his birthday was the 17th of March, which is St. Patricks Day. In the 16th Century, an Irish monk tried to petition for a celebration day for Saint Patrick, and saw all the Romans going nuts on this day, and basically said ‘that’s what I want’.

BarLifeUK can personally attest to the lovely-ness of bar Liber’s Pisco Punch, along with its house wines, beers, and, crucially, music. We encourage you to visit and let Stu and the team guide you through the menu. You can find Bar Liber at 274b St Pauls Road, London, N1 2LJ. Follow the team on facebook here.