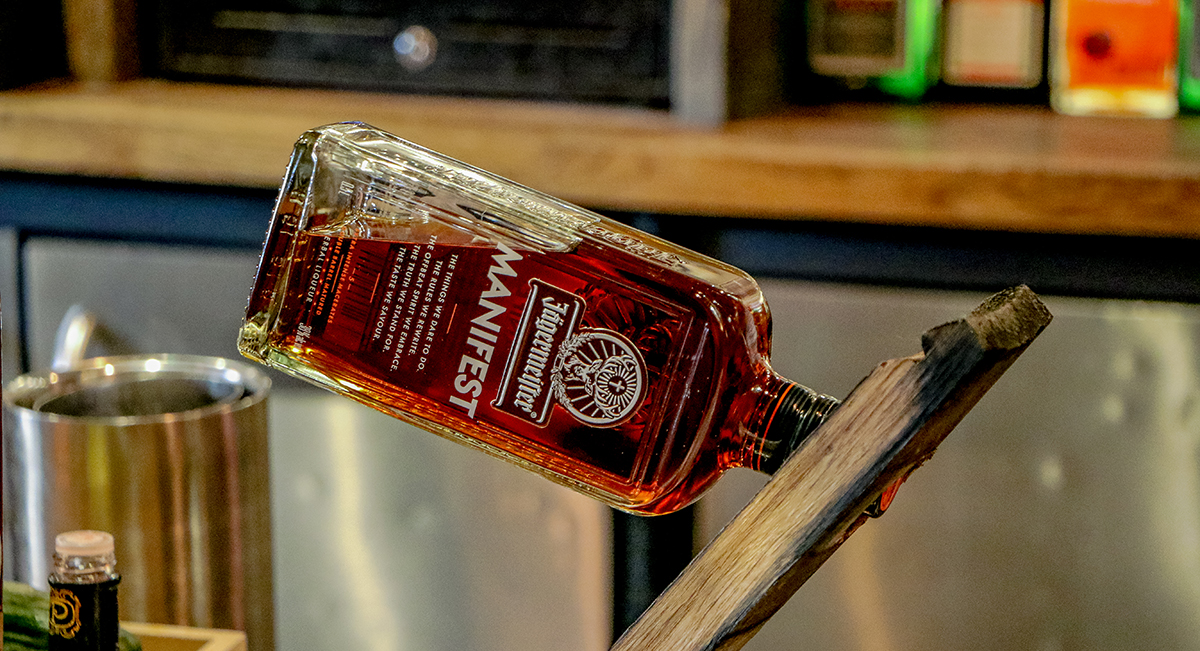 Edinburgh is not only a wonderful place to visit, but is also always an entertaining place to judge a cocktail competition.

Scotland love their Jägermeister. Every year the entries for the Meister Hunter flood in, so much so that two slots for the final are reserved for the Scottish heat. As we opened the door into Tonic, our home for the day, the bar was packed with competitors and supporters showing their Jägermeister love through the medium of drinking it.

As with the Bristol heat the week before the competitors were tasked with making 2 drinks for the judges in a 6 minute time limit. The first being their Jägermeister Cold Brew drink which they had entered to get them into the heat. The second a Manifest highball featuring a maximum of 4 ingredients including the garnish.

As always heading up the judging panel, and generally bossing BarLifeUK about was UK Jägermeister Brand Ambassador Florian Beuren and this heat we were lucky to be joined by the 2019 Meister Hunter champion Ellie Raeside.

By the time the first competitor stepped up to the bar the atmosphere was fantastic and didn’t dip until the last bartender had finished their presentation. Scotland competitions have long been great fun to judge due to the humour and passion of the bartenders. After almost two years of lockdown you could almost feel the pressure being lifted, the waiting was over and boy did they make the most of having all the eyes on them.

Doing your first comp is always tough but being up first in front of such a large and expectant crowd must be terrifying. If Lee McIlhone was feeling it he certainly didn’t show it, taking the piss out of his own garnish (‘baby’s breath is the worst name for a flower ever’) and knocking out his two cocktails seemingly effortlessly.

Jack Docherty drew inspiration from his day job as Distiller at Glasgow Distiller to use peated water from his still in his Manifest highball. Along with some pine flavours it gave the drink a distinctly Scottish flavour as well as looking amazing.

Kristaps Baranovs is a bartender who loves his toys. He embraced the ice cold element of the Jägermeister Cold Brew ritual with a raft of freezer chat whilst weighing out his drink (exactly 78 grams) on a fancy set of scales. However it was his highball with the impressive homemade swizzle stick that caught the eye.

The next bartender/stand-up comedian up to the plate was Scott Stevenson from one of BarLifeUK’s all time favourite bars, Glasgows Kelvingrove Café. My notes are a bit lacking if I’m honest as I was too busy laughing but I do remember the loving the pine infused mezcal (‘cuz it’s 2010’) in the highball which paired superbly with the Manifest.

The laughter continued when Johnny Morrison got behind the stick. He also won cocktail name of the day with his Ode to a Tribute highball ‘It’s not the greatest cocktail in the world but it is a tribute’, superb.

Rarely has someone with less experience than Sasha Montague stepped on a competition stage sharing that he had learnt to shake a cocktail a little over a month ago. As with Lee earlier on his lack of experience didn’t show in what was a very good presentation that kept the crowd enthralled.

Saving The Best Till Last

As it turned out the random draw had saved the best two on the day as the final two.

Kicking off the strong finish was Patrick Campbell on home turf. His presentation was very polished as were his drinks. The Cold Brew serve may have split the judges with its grapefruit addition but there was no such issue with his Back To Your Roots highball which balanced some very strong flavours perfectly and still allowed the Manifest to come through.

Closing out the day was Cal McMillan who managed to balance funny and informative perfectly as well as getting in my line of the day when Florian informed him he had 1 minute left, ‘Oh fuck off’ came the reply. His Cold Brew serve managed to taste like a coffee cherry coke with Guinness, and you don’t need me to tell you that was great. As was his Manifest highball combined with French peach wine and a homemade fermented camomile soda.

In the end our judging decision was made for us with two exceptionally strong performances. In fact the only thing that went wrong in either of them was when I decided to smash Cal’s highball all over the bar and floor for no good reason – sorry about that mate.

So Cal and Patrick will be joining Theo from the Bristol heat at the final in London next month. We will be bringing you news from the Manchester and London heats early next week.

In the meantime a big thanks to the staff at Tonic who managed to keep a thirsty crowd well lubricated throughout the afternoon, as well as to all the competitors and indeed supporters for making it such a fun day. As always thanks to Florian and the rest of the Jägermeister team for putting on such a great comp.