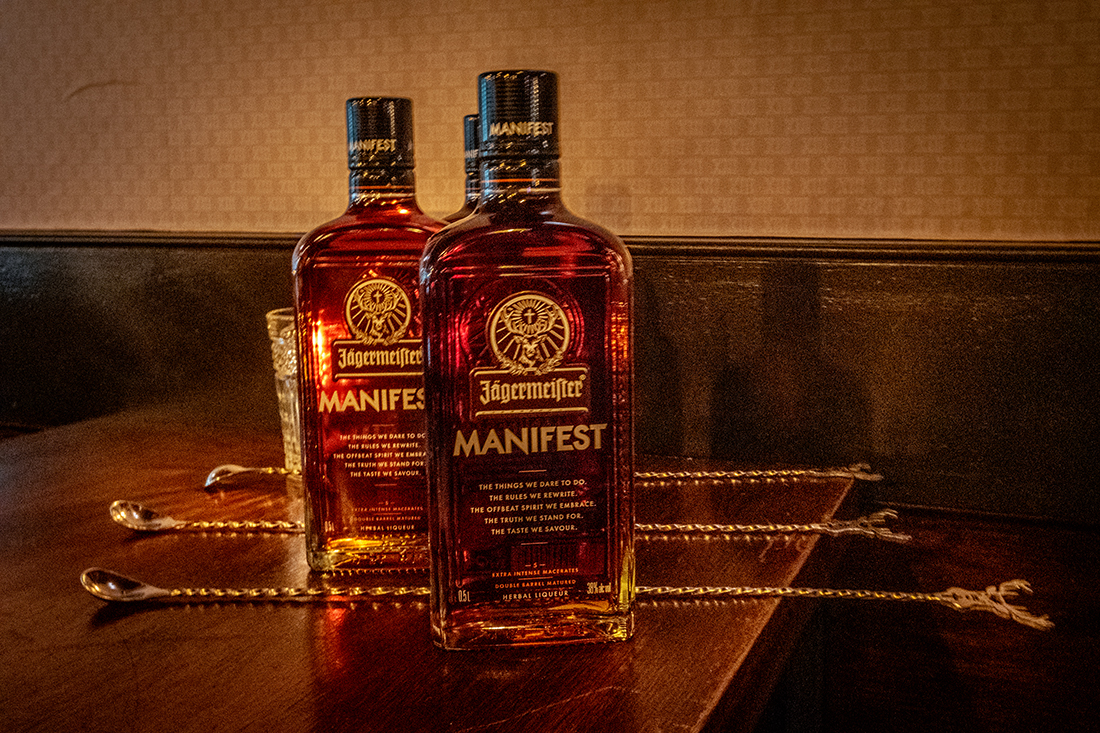 That’s right cocktail comps are back and BarLifeUK are back on the road.

Over the last few weeks people are beginning to have moments in which they feel the tide of the last 18 months starting to turn. For some it would have been having people sat on their bar stools again, for others it was the 2am bourbon and coke talking about a table of Karen’s (and secretly admitting a bit of you missed them), for many the time will come when they feel comfortable bartending without a mask on again.

Chances are it won’t be one lightening rod of a moment but instead a series of smaller events. One of those very events happened to me last week.

As I sat on a bar stool, my spiritual home, at Filthy XIII in Bristol, looking into the slightly terrified eyes of a bartender, as beside me Florian announced, ‘Your 6 minutes start now’. In that moment the world got a little bit more normal.

Jägermeister Meister Hunter was not only one of the first long-standing cocktail competitions to relaunch after lockdown they were also one of the very few to put on a proper comp during lockdown. It was a masterclass in running a competition over Zoom which I thoroughly enjoyed and which I sincerely hope we never have to do again.

As a result it is no surprise that BarLifeUK finds itself back on the cocktail comp trail with Jägermeister Brand Ambassador, Florian Beuren. We are visiting Edinburgh, Manchester and London, but we kicked off in Bristol, and we kicked off in style.

Bartenders had been tasked with coming up with a cocktail featuring at least 25ml Jägermeister Cold Brew with up to 5 other ingredients to gain entry into their heat. There were also bonus points available for incorporating one or more of the themes Ice Cold, A Social Ritual, Celebrating The Moment and Bringing People Together.

The six that had qualified for the Bristol final would have to make that drink plus a highball serve utilising Jägermeister Manifest and up to 3 other ingredients including garnish. All that in six minutes. With the judging panel of Florian, BarLifeUK and Rookie Programme alumni and local Jäger bod Kit Baker all looking on.

Hunting For A Winner

Theo Gordon-Boyd from The Ava Winebar in Bangor kicked off the afternoon and immediately spoke about the different ways Jäger is viewed and enjoyed by different groups of people. From having two shots before and after each gig he played with a metal band to his time working on a farm in Germany where it was drunk daily as a digestif. His Hunters Tale cocktail sought to combine those two experiences. His highball was the epitome of simplicity and fucking delicious as a result.

Amy Wilson up from Southampton’s The Social lit up the bar. Her relaxed presentation was not only fun but also informative, as she took us on a flavour journey around her favourite German Christmas market flavours. All resulting in a Black Forest Gateaux inspired serve with a lovely twist of Chai Tea. The highball was based on the social ritual of a Negroni being her last drink of the night and continued the superb chat.

If there was an award for glass of the day, then Adam Britton-Prior from Blacksmiths Lounge in Derby would have been top of the podium. Going in the visual vessel was a twist on the Espresso Martini with red wine, on paper I was sceptical, in my mouth I was a convert. His highball divided the judges, but for the record Florian was wrong and it was a Manifest and apple delight.

Cardiff is rapidly becoming the hotbed for bartending talent in the UK and in Rhiannon Ware they have another rising star. From her demeanour behind the bar you’d have never guessed this was her first comp, she presented her drink based on her ritual of the first coffee of the day with humour and style and if your reading this Mrs Ware your honey is bloomin’ delicious. She moved from Coffee to Tea for her highball with the story between the two drinks shining through.

Next city to be represented was Birmingham in the form of Bianca Hajnal. The first drink was a masterclass in tying your ingredients to your story and the brief, with a Brothers Grimm inspired presentation around her beetroot and raspberry based serve. Plus garnish prize of the day for a raspberry leather embossed with a Jäger logo. The visuals continued to the highball with a streak of edible paint making the sherry inspired drink stand out.

Last up was the force of nature Paul Minea who was fresh off a plane a couple of hours earlier. When someone says they’re going to make a Mai Tai and Iced Tea combo twist the first thing that runs through my head, it turns out, is ‘do I want that?’. Turns out, yes I do, especially with some on brand sustainability chat. His highball serve was a beautiful looking serve that would fly off the bar on a hot sunny day.

After the obligatory judges conflab and, on this occasion only minor, disagreement it was time to announce the bartender who will be heading to London for the final and the chance to get their hands on £3K cold hard cash.

That person was non-other than the guy that kicked off the whole day, Theo. He had the best combination of great drinks and presentation and that highball was the drink that got him over the line. Thank you to all the competitors for taking time away from work to come and compete, we know how precious time off is in the current climate.

Also big thanks to Filth XIII for hosting us and in particular Jemima for keeping everyone ‘watered’. The Jägermeister team for putting on such a great comp and Ashleigh Cilliers, Dan & Ash Bovey for helping me enjoy the always wonderful Bristol bar scene that evening.