Cocktail Cherries – A History and A Recipe

It’s cherry season so we thought we’d have a look into the world of cocktail cherries.

A couple of things happened last week that led me down a wormhole of internet searches about Cocktail Cherries. Firstly, a tidying up of the new garden uncovered a small cherry tree, which was a nice surprise. Whilst I was contemplating what to do with the upwards of 7 cherries it seems to be producing I saw a post by European Brand Educator for Heaven Hill Distillery, Benjamin Emare-Purslow. He had ‘made myself some cocktail cherries’, the picture sold me but more on that later. First my curious little head brain had to find out more about the treat at the end of a Manhattan. 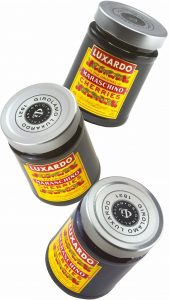 The Luxardo story is far too involved to delve fully into now, we’ll save that for another time, but there are a few important points to highlight when talking about the cherries. The company was founded back in 1821 in what is now Croatia, there is no exact date for the first production of their maraschino cherries but according to their Global Brand Ambassador (and font of cherry knowledge who helped us out with our research), Gareth G Franklin, it would have been around the mid 1800’s.

The reason for the exact date not being known is that their distillery (and indeed the whole city of Zadar) was destroyed by bombing runs during the second world war. Only two members of the Luxardo family survived who fled to Italy to restart operations.

As luck would have it the family had been working with a scientist, before the war started, who was studying cherries and had sent him over some of their cherry trees for his studies. Once settled in Italy, Giorgio and Nicolò III contacted the scientist and got back their cherry trees.

These cherry trees are vital to the story of Luxardo for both their famous Maraschino Liqueur and the cherries themselves. The Marasca Cherry gives maraschino not only its name but its distinctive flavour. In fact the cherry is so important that Luxardo cultivate a unique variety, one that now has its own genus – Luxardo marasca cherry.

So that dear reader is a brief history of the nations favourite cocktail cherry, but they also inadvertently helped the rise of the horrible dayglo red cherries so loved by Americans.

As many well-heeled American’s visited Europe from 1890 onwards they discovered the joys of maraschino cherries whilst sipping cocktails in European bars. On their return home they craved these cherries and where there is demand there is always supply. In 1915 U.P. Hedrick wrote in a report of the New York Agricultural Experiment Station ‘the fashion of adding preserved cherries, as much for ornamentation as to give flavor, to many drinks and ices’ to explain the boom in cherry consumption.

Many a google search will point you to blaming the usual enemy of the time, Prohibition. The story goes that the temperance movement were horrified by the European cherries that were soaked in alcohol. This led to people having to figure out a new way to preserve the cherries without using alcohol.

There are many problems with this theory. First up Luxardo maraschino cherries are not, and have never been, preserved in alcohol, they are jarred with marasca cherry syrup (a fact that seems to have escaped most people writing about them). Sure, there would have been some preserved in alcohol (brandy was a particular favourite) but it was not the only way it was done, and it wasn’t done by the most well-known.

By the start of the 1900’s Oregon had become the home of cherry growing in the US but without refrigeration they knew preserving was the only was to transport their products. Back then you could preserve using brine, sugar, chemicals or alcohol, and the last option was the most expensive so largely ignored.

With Oregon’s love of cherries it is no surprise that the man credited with coming up with the method still used to preserve cherries in America was based there. Ernest Wiegand was a professor at Oregon State University and in 1919 started working on the problem of preserving cherries.

Those of you who know your prohibition dates will note that this date makes the likelihood of his work stemming from temperance movement uproar unlikely, that and the fact that a colleague Bob Cain has repeatedly said that prohibition had nothing to do with Wiegand’s research.

So prohibition’s part in the change of the cocktail cherry production method appears to be minor at best however Gareth did explain how prohibition helped the explosion in popularity of the sweet red cocktail cherries in the US. ‘During prohibition many street level bars unable to turn into speakeasy’s and utilising their fancy glassware, became ice-cream parlours’ he points out ‘this uniquely American shop loved to garnish their ice-cream serves with a cocktail cherry.’

As far as we’re concerned those bright red monstrosities have about as much in common with a maraschino cherry as GB News does with…… well news. For a while at least the powers that be in the US agreed.

Back in the US in 1912 the fore runner to the Food & Drug Administration (FDA) stated that ‘Maraschino Cherries must be marasca cherries preserved in maraschino’ and that the American variations must be labelled as ‘Imitation Maraschino Cherries’.

The FDA changed this in 1940 with the definition that is still used today ‘cherries which have been dyed red, impregnated with sugar, and packed in a sugar syrup flavoured with oil of bitter almonds or a similar flavour’. Random fact time – benzaldehyde is mainly used to give ‘maraschino’ cherries their bitter almond flavour and is also the main flavouring for Dr Pepper.

This 1940 change meant that any cherry could be used and it is this change that is the main difference between the two types of maraschino cherry as far as Gareth is concerned. The marasca cherry is very bitter, almost inedible and certainly not enjoyable if eaten raw whereas the American cherries, such as the Queen Anne variety, are sweet. For Gareth the sourness of a real maraschino cherry is what works when using them in cocktails.

So here we are back at where this all began. What to do with the cherries in my garden?

It is pretty clear that making proper maraschino cherries is out of the running. The cherries in my garden and any you will find in UK shops are not marasca cherries and even if you could track some down, despite the wisdom of recipes you can find online, adding a bottle of Maraschino liqueur and a bit of sugar to them isn’t going to do the job (I’m sure they’d taste delicious but not original). You’d need to track down more marasca cherries and make a syrup of them. I’m assuming by this point you’d have the world’s most expensive maraschino cherries.

The American style is also out the window. Mainly because they are minging, and even if they are your guilty pleasure the process would require a lab. Also, they are about as cheap as Boris Johnsons aftershave.

He would like us to make it known that he is in no way an expert in the art of creating cocktail cherries, just a small town boy with a bottle of Rittenhouse 100 and cherry blossom dreams. He has however been making them for many years now so we thought we’d chat to him about his method so you can get some tips.

‘I’ve made them loads of times and always mess around with them every time I make them, apart from leaving the stalks on which I always do as they look better in pictures. This time I’m using sweet cherries but you can use sour ones when they are in season, which is about now.’

‘I think of it like a punch, sugar (I use mainly local honey and a bit of Demerara), spice (this time I’ve gone for cardamom and caraway), sour (comes from the cherries to a degree but I’m not looking for it to be balanced, definitely more sweet) and bitterness (which comes from the clove which also adds some more spice). Of course the strength comes from the whiskey. I’ve used Rittenhouse for this one as the higher strength extracts more flavour in my experience, also with it being a rye it should play on the spicier notes more. This is my first time with Rye, I usually use Bourbon.’

‘First thing I do is prick the cherries with a cocktail stick and jam them into a sterilised mason jar. The measurements are a bit off the hoof but I start by heating about a teaspoon of each of the spices in a pan until they smell good, then in goes the whiskey, bring to a simmer and stir in the honey and sugar until they dissolve. That all gets poured into the mason jar with the cherries and topped up with filtered water to ensure they are covered.’

‘From there, time is your friend in my experience, the longer you leave them the better. I just finished some last week that were three years old, and were by far my favourite but a couple of months is a good minimum. Just remember to lightly agitate them every day or two.’

Benji’s recipe is below but there are many others out there to use for inspiration. You can swap the booze for your favourite or go alcohol free with some juice (you will have to up the sugar to help with the preservation). Play with the flavourings, perhaps drawing inspiration from the flavours in the cocktail you plan on using them in. Prick or Pit?

If you’ve never had a go before now is the season you’ll find them in shops so why not pop your cocktail cherry (come on, you didn’t really think we’d go this whole story without that pun did you?).

Many thanks to Gareth and Benji for their help with this article.

Prick all cherries and put in a sterilised jar. Warm up the spices, pour over whiskey and warm through, add sugar and honey and stir till dissolved. Add 1 tsp of the essence and pour all liquid over the cherries until completely covered. Seal and leave for 2 months.