News has just come in that the Supreme Court has found in favour of small businesses in regard to loss of business insurance.

The ruling covers businesses who had business interruption insurance policies. Originally the insurance companies refused to pay out when businesses were forced to shut in the first lockdown say something legal to confuse people and get out of it. 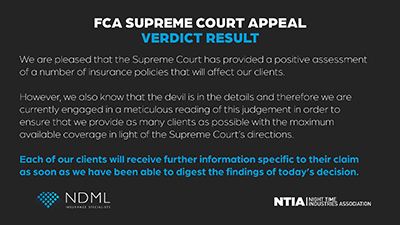 The case revolved around the interpretation of policy wording, seemingly most specifically ‘Notifiable Disease’, that the insurance companies were trying to use to avoid payments. Now that this ruling has been given it looks like it will cover around 700 policies which has the potential to affect up to 370,000 small businesses (although this number is now thought by many to be less) including many in the hospitality industry.

This has the potential to provide a huge boost for many small businesses hanging on by their fingertips and drowning in a debt mountain increasing with every passing month.

One of the major ‘leisure and hospitality insurance specialists’ the NDML released a statement in conjunction with the NTIA shortly after the announcement was made saying:

‘We are pleased that the Supreme Court has provided a positive assessment of a number of insurance policies that will affect our clients. However, we also know that the devil is in the details and therefore we are currently engaged in a meticulous reading of this judgement in order to ensure that we provide as many clients as possible with the maximum available coverage in light of the Supreme Court’s directions. Each of our clients will receive further information specific to their claim as soon as we have been able to digest the findings of today’s decision.’

This has seemingly allayed some fears that the insurers would tie up the payments in legal red tape for years as it seems they are accepting of the decision and ready to pay up and move on. Of course this remains to be seen, but that light at the end of the tunnel may just be getting a bit closer and a bit brighter.

Everyone who made has made a claim will need to speak with their policy holder to see where they stand.