The 2020 Bartenders Christmas Poem Is Here

Joe Butcher, the Last Bartender Poet, is back and his 2020 Christmas Poem is an absolute gem.

‘twas the night before Christmas and all through the bars, 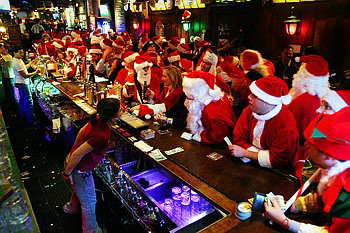 Empty seats, empty ice wells and empty tip jars.
The aprons hung up in their lockers with care,
The bartenders, the floors staff, the chefs just aren’t there.

A Christmas that’s over before it’s begun,
Unless you’re fox hunting or in Cornwall’s tier 1,
You can’t see your mates for some christmassy fun,
Worse than once-a-year drinkers, it turns out, is none.

The punters are cuddled up warm and asleep,
Unless they’ve got something substantial to eat.
Can’t go out for pints, go for “dinner” instead,
You can’t get a scotch unless it comes as an egg.

The prospect of going to mojo is gone,
Where the best drinks are served between twelve and half one,
As we praise baby Jesus being born in the stable,
What the point if there’ll be no more dancing on tables?

My plea to the blonde haired scruffy man,
Let the bars open where they’re safe and they can,
And as we close out one of the worstest of years,
Don’t let hospo die while it all ends in tiers.

You’ve opened up retail without curfews or bans,
And it’s safer than the park with a big bag of cans,
It’s a good proposal and I just need you to back it,
Don’t make Andy go and get his North Face Jacket.

So on to my final Christmas wish,
And if Pfizer and Moderna turn out to be pish,
That we all can soon get back on the stick,
Let’s hope Oxford produce at least some useful pricks.

Now let’s be done with this year, it’s been pretty shite,
A merry Christmas to all, and to all a good night.

Our annual round up of dates, days and events that may or may not be of interest to you. Now