The ‘Home of the Whopper’ have opened up their Instagram account to support struggling independent hospitality businesses.

The Burger King marketing team have had some pretty big wins in recent times. Last year they stopped selling their Whopper for a day to encourage people to buy a Big Mac as it was raising money to support children with cancer. They have also regularly won the big marketing awards with campaigns such as the McWhopper and the Whopper Detour. 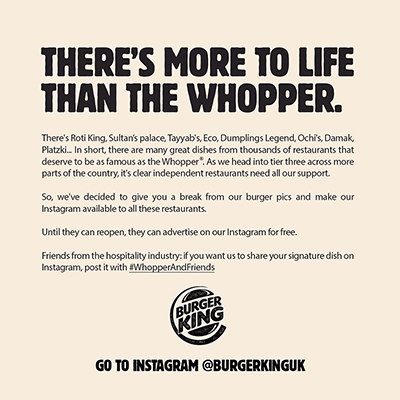 They have now announced they are turning their marketing clout in the UK to aid the independent hospitality businesses struggling with the unfair tier system.

There’s More To Life Than The Whopper

Burger King are handing over their UK Instagram account to those independent businesses to advertise their signature dishes. Stating that ‘It’s clear independent restaurants need all our support’.

They will not be posting any pictures of their dishes, instead encouraging independent venues to post a picture of their signature dish with the hashtag #WhopperAndFriends. They will then share the picture on their Instagram account and will continue doing so until hospitality can reopen.

Now some will of course look at this negatively, as a PR stunt, and some would say their Insta follower numbers of 34,000 are rather poultry (KFC have 90,000 – ba-dum) and they are hoping to increase them. Whatever the reason it is a great gesture at a time when any help should be gratefully received, and one which could definitely help many struggling businesses out there.

So if you are a venue doing take away/delivery food during the tier lockdown jump on Instagram, post a picture of your signature dish and tag it #WhopperAndFriends. If you want to see what they have done so far jump on the Burger King Instagram feed.