How You Can Help End The Curfew In England – #CancelTheCurfew

Next week there is a vote in the House Of Commons to end the 10pm curfew, you can help influence it.

The vote was actually due to take place today (Wednesday 7th) but the government have postponed it to next week (Wednesday 14th). The simple reason for this is that several conservative MP’s indicated they were not going to tow party lines and were going to vote in favour of cancelling the curfew. 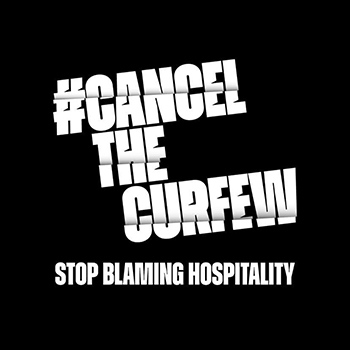 This extra week is designed to give the man with the morality, and face, of a weasels scrotum, Dominic Cummings, and his cronies time to bribe and bully those MP’s back to their side. This is why your help is so important and all it takes is 20 seconds.

The #CancelTheCurfew gang have teamed up with the Night Time Industries Associations (NTIA) and thrown their support behind their campaign to pressure the government. You simply need to click on this link put in your postcode, the system brings up a pre-written letter and with the click of a button they’ll e-mail it to your local MP.

Putting pressure on MP’s is vital and really does work. Do it.

It has to be said at this point that the #CancelTheCurfew campaign has been a huge factor in the decision to bring this vote. Since the team launched #CancelTheCurfew just over a week ago the message has spread quicker and with more force than I, for one, imagined it could. A large part of the reason for this is the effort everyone involved has put in. Every day 100’s of messages pass across their chat group – ideas are shared, articles are drawn attention to, successes are cheered and importantly criticisms are taken on board.

The work to get #CancelTheCurfew trending cannot be underestimated, nor can their success. At one point it was the number 1 trending hashtag in the UK and has regularly been in top 5. They have got out there to spread the message as well, appearing on TV and radio both nationally and locally, newspapers and websites have picked up the torch with several national titles sharing the hashtag and message behind it.

On Saturday venues across the nation came together in silent protest sharing hundreds of images across social media using #CancelTheCurfew. It was a fantastic show of solidarity with some venues going above and beyond. This Saturday it is back as Tom Lord, founder of Hospitality Gin and one of the driving forces behind the campaign told us:

‘The level of support on Saturday and since has been unbelievable. Hundreds of venues from across the country took part in the original Saturday protest, including some of the most famous bars we have, with hundreds more joining in since.
Now we just need to keep up this momentum. This week we need everyone to email their MP telling them to #CancelTheCurfew via the NTIA and then on Saturday at 10pm, post photos of your team outside your venue all over social media with #CancelTheCurfew. The Government have already delayed the vote as they’re running scared, we can’t let up now.’

There have been a lot of people working very hard for this campaign across the country but I think it is worth a quick shout out for the people putting in the bulk of the hours. If you know one of them send them a wee message of thanks, they really do deserve it:

Also bear a thought for our friends in Scotland, this vote does not directly influence them (chances are Wales will follow England’s lead) and there is an announcement coming later today which doesn’t look like being good news. We’ll be bringing you that announcement as it happens but send positive thoughts their way. Also Paris, where bars are being forced to close for two weeks, despite restaurants being allowed to stay open.

To see us out is Head of Drinks & Training at The Liars Club and Sky TV’s latest sensation, Adam ‘Big Bag Of Cans’ Wilson:

‘The speed this campaign has picked up momentum has, honestly, blown my mind. The bare bones of the group have been there since the beginning of this whole sorry shit show – a bunch of bar admins who were looking to each other for help and advice whilst their own local members looked to them. Part support group, part brain trust, almost complete strangers.

We’ve helped each other out over months of absolute lunacy from the announcements in the “golden days” pre-lockdown, through the laws and guidance for reopening to… THIS.

So we were able to mobilise fucking fast – I don’t think I’ve seen a movement pick up this quickly and gain cross-party support since we went chasing oil WMDs in Iraq. 48hrs from launch to being addressed in Parliament, another week and it looks like there’s going to be a vote against it – thanks to the Coronavirus Act things like this can be pushed through without any ministerial support, and things have to be retroactively veto’d. Theoretically this rule means they can act fast and be ahead of the curve, but realistically it just means our Government are making decisions without consultation or justification, consequences be damned.

It’s all very fun getting your face (and a reference to a big bag of cans) on telly, but without the behind the scenes support (massive shout to Lucy Noone from Pear Comms and Daisy Whitehouse from Down at the Social for whipping us into shape and making this look like a real campaign), as well as bar owners, publishers, guests and the hundreds of people who have put their names forward to support the cause. I only hope we can reward their faith with some real life results, and set a precedent that just because someone in a fancy suit says it’s right for them, it doesn’t mean that it’s right for everyone else.’