For the last couple of months I (Spartacus, or Simon, I answer to either) have been pulling the odd shift, and the odd muscle, at a new bar in Central London. Partly to keep my eye in and partly to get a couple of extra quid in my pocket due to the complete lack of help from the government (incidentally have you seen the new BarLifeUK Patreon page? You should definitely check it out). Coincidentally I was rota’d on last night and thought it would be the perfect opportunity to share my thoughts on the first night of the new restrictions.

There are many changes and many areas to look at but let’s start with the one that was definitely the most annoying (apart from the obvious lack of money by closing early).

Paint me like one of your French girls and call me Martha they are fucking uncomfortable. I was convinced that I had reached maximum respect for doctors and nurses until I attached, what I can only assume was a 17th century torture device, to my face for a prolonged period.

After an hour of wearing I bent down to fill the glass wash and felt as if Warwick Davies was hanging off my ear lugs. After the second hour I was convinced someone had replaced the previously innocent looking elastic with razor wire. After the third hour I was looking in cupboards to find razor wire. From then on it was all a semi-conscious blur of ear pain, basically how I imagine a Black Eyed Peas concert to be.

The moment the last customer was out the door and I could release the mask (the rules from my reading of them say that once you are closed you can remove your mask for breakdown and last night I would have gone toe-to-toe with Anthony Joshua to fulfil that belief) the feeling of relief was incredible. Right up there with making it to a toilet just before you pee yourself or your own bed after 5 days of festival camping. I actually googled up how long it would take me to walk home when I realised I’d have to put it back on to get home on the tube.

That isn’t then end of the mask issue, there are practical ones as well. Straw tasting cocktails has never been 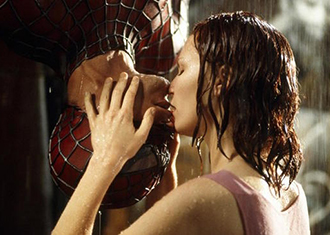 the coolest looking thing a bartender can do behind the stick, but with the moving of the mask each time it is now about as aesthetically pleasing as a dehydrated lime wheel in my drink. Kirsten Dunst managed to make the removing of a mask look sexy in Spiderman, that is the only time it is possible (also it should be pointed out that the NHS advice is to not repeatedly touch your mask so probably best to move away from this action if possible).

One thing I hadn’t realised was just how much the bottom of the face is used in silent communication between staff members. Hollywood would have you believe that communication is all in the eyes – Hollywood is talking balls. The raise of an eyebrow for example can mean many things most of which are separated by the expression around the mouth. A wink can be charming or creepy dependent mainly on what is happening around your pie hole (unless you are Trump, then it is ALWAYS creepy).

With music playing, customers chatting and shakers shaking the silent communication is vital for the smooth running of a bar. This is really limited by the mask and makes life much more annoying.

It’s not all bad news however in mask land. If you are in a bar that allows a shot on shift then I can confirm that the lingering aromas of a shot of bourbon in your mask nose area is a delightful thing. In fact I may wear masks to all spirit tasting sessions from now on.

Son Of A Mask

Then we have the customers. Ahhhh lovely, lovely guests. I think it is fair to say their understanding of the new rules is….. limited. I also don’t think it is entirely their fault.

We have been religiously reading up on the latest rules and regulations as they affect (or massively fuck over) our industry so much. It is unsurprising that many members of the general public will not have been as diligent in their studying of the guidelines and our government have been truly horrific at making the country aware.

A lot of the evening was spent chasing people around the room reminding them they need to wear their mask to go to the toilet, often meaning they ended up walking around more without a mask on as they returned to their table to retrieve it. We tried a few things, explaining the rules as they were greeted at the door (and hoping they could hear us) and reminding them that they needed to wear them as they left as we were taking payment but it was an uphill battle. I don’t think anyone was doing it intentionally and we certainly didn’t have much of an issue with people being dicks about it (I suspect we were lucky) but this is a new normal and it will take people a while to get their heads around it.

The most surreal moment came when a member of the local council came round to check we were following the new rules and attempted to enter the venue without a mask to check if people were wearing masks. You couldn’t make this shit up.

Our government have made many decision which successfully wasted a lot of money in the last few months (the Job Retention Bonus scheme will see McDonalds getting bonus of up to £120 million in January for example) but on yesterday’s evidence the NHS Track & Trace app may top the lot.

Having been trumpeted as one of the single most effective ways to combat the spread of coronavirus, it currently seems about as effective as me playing a trumpet. According to The Guardian experts are expecting the uptake of the app to be somewhere between 18-30% and if our customer base last night was a rough cross section of the country that seems optimistic. Again, this is early days but the lack of trust in the government seems to have, unsurprisingly, translated to trust in the app.

The App was also down in our area for a while which, considering how few people have signed up for it, doesn’t bode well if it does get popular.

It just didn’t feel right. You could see people beginning to worry about it at about 9pm and suddenly the drinks per person per hour increased. In our venue the crowd didn’t start ordering shots and Nuclear Daiquiri’s (losers). By the state of the streets after 10pm not every venue had cliental with such self-control. In the couple of months we have been open it was the worst I have seen on a Thursday in regards to intoxication levels at any point in the evening.

Our customers were well educated, it seemed, on the rules when it came to kicking out, we had no issues in that regard but the overheard conversations were exactly what we expected and feared. One table was planning on going to the offy to get some more booze before heading home, fair enough. Another however was overheard talking about a mate of theirs who was having a few people over for some post 10pm drinks, they paid up and made their way over.

As anyone, apart from the people in power, could have predicted we have people going from a controlled, clean space which enforces the rules to someone else’s house with a load of other people. Drunk. Oh, and to get there they have to go on public transport with everyone else who has been out until 10pm, many undoubtably not wearing masks and definitely not getting fined for it.

So that was it. I sipped on a bourbon and coke as I broke down the station and wondered what everyone else’s experiences had been like on the night that marks the beginning of the toughest period the hospitality industry has seen in my lifetime.

The mask was uncomfortable. The customers were uninformed. We still did everything we could to ensure they had a great time whilst they were with us, reminding them why drinking in a bar is more fun to drinking at home. But. It just felt odd.

The one thing I knew as I looked around at my colleagues doing their thing and sharing war stories was this industry is not going down without a fight. The wonderful people who work in and love it will make damn sure that fight is done with a dignity and passion that those in power don’t and will never possess.

Good luck everyone and keep providing an experience that makes people want to come out a bit earlier than they used to, makes them want to treat themselves a bit  whilst they’re with you. Fight, but fight with a smile on your face…….. not that anyone can see it.

Chancellor Rishi Sunak was back on our screens this morning announcing the latest attempts to assist English peoples finances. In

The shaker everyone in the world wants is back, and it’s even sexier than last time. Many great things have

Wales To Go Into ‘Circuit Breaker’ Lockdown From Friday

The latest area to announce new restrictions is Wales. We've been hearing rumours over the last few days of hospitality