Customer Education Falls On Our Shoulders

It appears that it is up to us to do the educating as well as the serving as we reopen.

So, Saturday happened. There was the expected Daily Mail photographers camped out in trees waiting for the perfect shot to prove that the country couldn’t social distance, and sell a couple more propaganda rags. They did a great job of making it look worse than it was, but it equally wasn’t all sunshine and flowers. 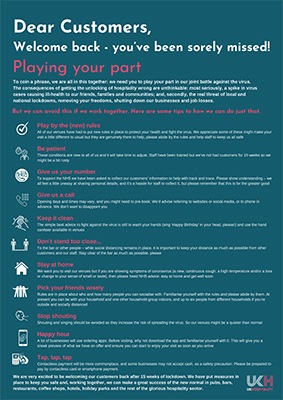 We have spoken to bartenders across the country and the feedback is largely similar. A lot of people were very well behaved, some needed reminding after a couple of drinks and a few were fucking Boris’s. There is one constant however, a lack of understanding of the new rules (if you would like to share your experience then our 1 minute survey can be found here)

To be fair it isn’t entirely their fault. The problem is that the government guidelines were so monumentally vague that they couldn’t communicate them succinctly to the public. As such if people wanted to know the rules, they had to put effort in to finding them. People, some people, are lazy. They just want to have a drink, in a bar, with a couple of mates.

What we are saying in a nutshell is – the useless fuck canoes who claim to run this country have taken the hospitality industry on a date, climbed out the window before the bill came and still somehow managed to give us the clap.

To earn money, and keep a roof over their heads, millions of hospitality workers are putting their health and livelihood on the line serving people who, in some cases, don’t give a shit. It is a horrible situation, but it has fallen on the hospitality industries shoulders to educate customers.

Why should we do this? If we don’t it appears no-one else wil,l and if no-one does then there will very likely be a second spike and another lockdown. That is such a scary scenario for our industry and country that we HAVE to do everything we can to try and avoid it.

The folks at UKHospitality have put together a poster that you can put up in your venues to educate your customers. It is really useful but potentially a little wordy for people to realistically read before they enter your establishment.

Perhaps they can be put on tables for when people arrive, printed in menus, put in toilets etc. Perhaps you can use them as a template to write your own house rules. Maybe bullet points can be turned into posters or even t-shirts for your staff.

Saturday wasn’t pleasant. It was never going to be. People will get better at following the new rules. It will get easier, but we can help by being the ones to educate. We shouldn’t have to, but we need to.

Remember, there are always a small number of cunts trying to ruin it for everyone, but until the next election we’re stuck with them.