True Colours – The Contradictory Faces Of Our Industry

At times like this, every industry needs someone to stand up for and represent its workers. Before the lockdown started, hospitality had two obvious contenders – Now there is only one.

The hospitality industry has many public faces, many household names who represent us on a daily basis. The trouble is that almost all of them are from the restaurant industry. Our TV screens, newspapers and websites are full of restaurateurs, chefs and reviewers, but when it comes to pubs and bars the pickings are few and far between.

In fact, there are only really two who are consistently used for interviews or as talking heads when the news needs comment. Those two faces belong to Tim Martin of Wetherspoons fame and Jonathan Downey of Match Group fame. There have been some notable other contenders, not least Edmund Weil taking apart Tim Martin on Sky News at the height of the Brexit campaign, a superb piece of TV. But, in general, these are our point men.

The way they have approached the coronavirus pandemic has been vastly different and when the dust has settled there should only be one left standing.

On the face of it, Jonathan and Tim may be seen as very similar. Both are very successful in what they do, both have been in their own way trailblazers in their fields, both are more than happy to speak their minds no matter what and both have their detractors from their own industry.

We have spent many hours in both of their various venues. One to enjoy awesome drinks and fantastic music and the other when we’re skint or at an airport. Once we’re allowed back out there will be only one we’ll be supporting, here’s why.

As I hinted at earlier not everyone in the industry has always been a fan of these two gents. Their outspoken nature, sometimes ‘misplaced’ passion and absolute belief in their opinions has often led some of their peers to deride them. Over the years I have often heard mutterings about both at various events from people at all sorts of levels.

Over the last few years however Tim has well and truly moved firmly into a lot of peoples shit list. His, previously hinted at, politics when it came to Brexit were truly disturbing to watch. Especially from someone who employed so many of the people he was trying to stop coming to the country. He was a vocal and financial supporter of the Brexit Party, even spending £94,856 on pro-Brexit beer mats. In short, he wasn’t just beginning to look like Steve Bannon he was increasingly starting to sound like him.

That is politics though. The coronavirus is a leveller of people. Surely this was his time to use his, not insignificant mouthpiece, to do some good for this industry again.

Well he certainly used his mouthpiece, unfortunately it quickly became apparent he had yet to extract it from his Brexit-loving arse.

He kicked off proceedings by releasing a video suggesting staff might want to take a job at a supermarket, the reason for this is that they weren’t going to pay their 40,000 strong staff the furlough money until the government had released it. This was all the more galling when just 3 months earlier, after the successful Brexit vote, the company’s shares rose 10%. In the period since the referendum was announced in 2016 to the Conservative win in the vote Wetherspoons doubled in value, and Tim’s personal wealth increased by £250M.

He also announced that the staff bonuses, which were due to be paid out that Friday would be held back until the pubs reopened. Nice.

More recently Tim, kind of, backed down on his pay comments after 95 MP’s signed a petition for him to pay his workers. He has also banged on a lot about how Wetherspoons pays 1,000th of the total tax paid in the UK and how he’ll be taking a 50% wage cut. What a man of the people.

Meanwhile Jonathan was busy helping out the industry. His first move was to set up a WhatsApp group for owners and senior management. In this group he shared information from his contacts in the government and journalists ensuring that, right when the internet was being flooded with misinformation, rumours and conjecture, there was somewhere that people could turn to for legitimate information, news and advice. We know, from talking to many owners and operators that this was a huge help.

It turned out Tim’s most ridiculous announcement was still to come though. This week, as the experts and NHS are imploring the nation to keep up the lockdown protocols. As the government works on a plan to reopen the country (and despite your thoughts on how they are dealing with this I think we can all agree that we don’t want a massive second spike, or to be America right now), Tim ‘Fuck You I Won’t Do What You Tell Me’ Martin announced that Wetherspoons would be reopening in June.

At this point I tried to write a sentence that was pithy and clever whilst cutting and admonishing, but I kept coming back to one word. Cunt.

Whilst he tries to undermine everything that we have all done, Jonathan is trying to save the industry he loves.

Jonathan launched Hospitality Union hours before the country was told to avoid pubs, bars and restaurants. The group, which now includes over 3,000 business owners, was designed to ‘defend our industry’. It has recently launched the fantastic #NationalTimeOut campaign. 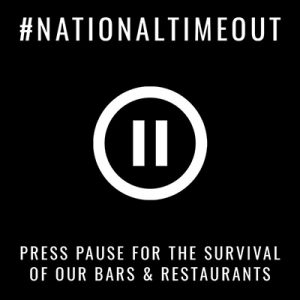 Hospitality Union estimate that without some extraordinary next measures more than half of the hospitality businesses and as many as 2 million jobs will not survive.

The #NationalTimeOut allows the whole hospitality industry to press pause for 9 months. It will:

This will only apply to business that have been forced to close by Government order in hospitality and leisure. It is designed to be a simple solution, allowing businesses to work through the next 9 months towards a bounce back, without the need for another taxpayer handout.

This is a phenomenal initiative and a solution that makes sense for all involved. Jonathan has written a letter to Chancellor Rishi Sunak outlining the plan and we can only hope that it is taken on board.

Jonathan has shown everything that makes the hospitality industry so great in his actions over the last few weeks and everyone in our industry should be aware and thankful for what he has done, and is trying to achieve. Tim has shown none and should be ashamed of himself (he won’t be).

Find out more about #NationalTimeOut here and support it in any way you can.

What Is #CancelTheCurfew & How Can You Get Involved

Over the past 24 hours you may have seen a new campaign has been launched, created by hospitality professionals