In Featured, The Rookie Programme

For the first time we took the Rookies up to Scotland for two days including a trip to the Auchentoshan Distillery.

As I sipped (strictly speaking gulped) on a pint of Tennent’s in the superb Pot Still pub in the heart of Glasgow I could feel the stress of the last 24 hours beginning to finally drift away. Storm Ciara had really done a number on the travel for our group of intrepid bartenders.

It had taken me just under 24 hours to get from my house to Glasgow, via the delightful Gatwick North Terminal and area of outstanding natural beauty that is Luton Airport. For the Rookies, trains had been cancelled and flights had been delayed but remarkably only one of the gang had failed to make it on time, poor old Ellie had had a mare but she would still be able to join us on day two for the distillery tour, so all was not lost.

As snow blanketed the group we made the, thankfully short, walk to our home for the day, the very flash bar in the Edrington-Beam Suntory head office. There we were greeted by our equally flash host for the trip, David Miles. 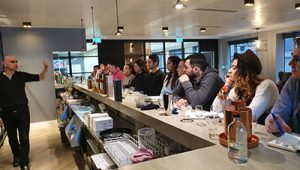 He kicked off the day’s proceedings by leading the Rookies through the wonderful world of Scotch Whisky. With bottles of The Macallan and Highland Park to help the team understand the nuances that the different elements of production and raw material give the finished product.

The Macallan range also gave a great insight into the different finishes that can be achieved through aging in different types of barrel, also reminding me never to say to David that the ‘barrels are sleeping’ when whisky is being aged. It really gets him wound up and he’ll be ranting about interaction between whisky and wood before you’ve had time to check out his fancy shoes.

David is never happier than when talking about Scotch and his passion quickly rubbed off on the Rookies with furious note taking and questions flying in from all corners. There is something very special about trying a spirit in the country that it is so inextricably linked with (perhaps we should do next years rum session in the Caribbean??).

The following session was a first for the Rookie Programme and will definitely be one we’ll be running again.

We were joined in the bar by four members of the Edrington-Beam Suntory marketing team – Jenifer Spinks, Laura Wheeler, Chris Anderson and Nick Ganich. They gave fascinating talk covering the world of marketing, from how they conceive plans for brands through to how they work with bars. 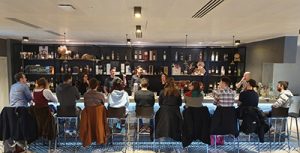 It ended up being a two-way discussion with them finding out from the Rookies what they look for from a brand from a bartenders point of view. The questions and discussions didn’t stop and it was only the timetable that stopped the chatting.

Their different backgrounds and routes to their current jobs meant they had a wide array of experiences which the Rookies found fascinating and showed a whole different avenue to them for there futures which they had previously not considered.

There are few cities that can keep up with Glasgow when it comes to a fun night out and after a rather chilly walk to the hotel to check-in, and warm up a smidge, it was time to head out on the town, and where better to start than the Kelvingrove Café.

It has long been one of our favourite bars in the UK and once again it didn’t disappoint. The Rookies did their traditional order one of every cocktail on the menu trick and were suitably impressed with the selection. You know the drinks are good when the insatiably hungry Rookies consider another round of drinks ahead of food, they comprised with a mini round before we headed to what turned out to be one of the finest meals I’ve ever eaten. 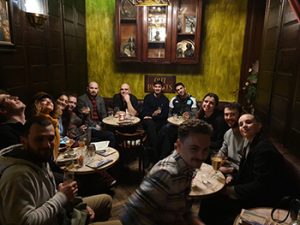 Five March had been recommended by both Robyn Wilkie-Evans and, previous Rookie, Danny McManus, if those two suggest a restaurant you don’t say no.

If you find yourself hungry and in Glasgow I cannot recommend Five March highly enough. Its small plate sharing concept is perfect for larger groups but there were plenty of couples enjoying themselves as well. When you go make sure you try the Kimchi and the carrots….. and the potatoes…. oh and the pork belly…. sod it have it all.

One of my favourite things about a night out in Glasgow is the fun that the bars bring to drinking. This doesn’t mean the quality is any less, just means that you will be guaranteed a great laugh whilst you are sipping on your drinks. With Danny as our guide there was no chance this time was going to be any different.

Our last stop of the evening certainly sums up a great night in Glasgow, if you can’t have fun in Nice N Sleazy (another Robyn suggestion) then give up. It’s the home of the £3 White Russians on optic, a Buckfast cocktail list and superb music. After a couple of drinks this old man had to head back to the hotel, the Rookies….. maybe not so much, they had karaoke in their futures.

The following morning, after a detour to pick up Ellie from the train station, we found ourselves in the beautiful surroundings of the Auchentoshan Distillery.

For most of the group this was their first time at a Scotch distillery and what a treat lay ahead for them.

For those of you who have been to distilleries before you will be aware that just because somewhere makes great liquid doesn’t ensure that the distillery tour is any cop. There are many elements that need to combine to create a great tour but the linchpin of the whole thing is a great guide. In Brian we had one of, if not the, best distillery guide I’ve ever met. 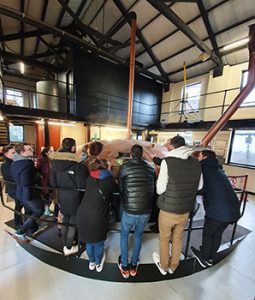 From the off his combination of knowledge (with ability to impart it), enthusiasm, humour and openness had the whole group enthralled. The distillery itself is superbly laid out with plenty of opportunities to take Instagram worthy pics and to get up close to the production process.

We will get into the finer details of the tour and Auchentoshan in general in a separate article coming soon.

Once the tour was complete it was time for a tasting and cocktail (although there had been some rather nice samples along the tour) in the distillery bar, the Distillery Cask was a particular hit. The questions kept being fired at Brian and he didn’t miss a beat as he gave us some of the special expressions of Auchentoshan. If anyone wasn’t a fan before the tour they certainly were by the end.

As we waited for the taxis the gift shop got the locust invasion treatment. All that remained for the end of our Scottish adventure was the joy of the Wetherspoons at Glasgow airport, not quiet the Kelvingrove Café but a nice cold pint (maybe with a responsible whisky chaser) certainly went down well.

It’s fair to say the Rookies (plus myself and David) had an amazing time up in Glasgow. A trip we hope to be making with the Rookies for many more years to come.

A huge thanks to the Edrington-Beam Suntory team for welcoming us in and sharing their expertise, and the same to the team at Auchentoshan. Thank you to everyone we visited on our night out, your hospitality shows no bounds, plus our man on the ground Danny and queen of suggestions Robyn.

Budget 2021 – The Key Points For Hospitality