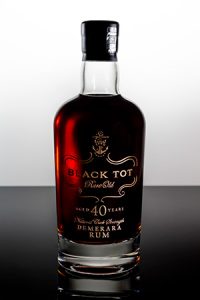 For the uninitiated, Black Tot Day (July 31st, 1970) marks the end of the Royal Navy tradition of issuing a daily ration of rum to ships’ crew. The mathematically astute will notice the 50th anniversary of the saddest-day-for-sailors occurs this Summer, so it makes sense that Black Tot Rum – who bottled some of the last remnants of the Navy’s rum and named it ‘Black Tot Last Consignment’ – have appointed a new global ambassador in advance of a busy period for the brand.

The new ambassador, Mitch Wilson, previously worked as a barback at rum’s high temple (Trailer Happiness) in 2013, before embarking on a career that has seen him behind the stick at Rum Kitchen and Made In The Shade in London, and Henrietta’s Supper Club and PS40 in Sydney, and ambassador-ing for Maison Ferrand in the Asia Pacific territories.

Wilson says of his new gig: “There’s been a growing interest in the rum world about uncovering the real story of navy rum, and I’m delighted to be joining the ranks of those dispelling the myths around the history and heritage of this incredible spirit. It’s an honour to represent a brand that showcases both the historic bottling of genuine navy rum, while also having new, exciting rum blends in development – I can’t wait to share our story with rum lovers around the world.”

In the lead up to Black Tot Day’s 50th anniversary, Mitch Wilson will be holding masterclasses at bars around the globe, so if you would like to learn more about rum in general, and Navy rum in particular, give your local Black Tot Rum rep a shout, and book a masterclass place.