Last night in front of a room full of their peers the five finalists gave their all but only one could emerge victorious.

At the end of last year BarLifeUK joined UK Bacardi Goddess Metinee ‘May’ Konanyonelendmeadress and a host of guest judges to travel across the country judging the Bacardi Legacy heats. We have been on this journey for many years and the quality was some of the highest we have seen.

From Bristol (now in London just to confuse things), Alex Godfrey is a natural presenter, one of those people who walks on stage and looks at home, his drink Two Lives is an ode to everything good in a rum drink and satisfies any thirst.

Build the drink in a highball glass and garnish with an orange wedge, cherry and mint.

Representing Nottingham’s World Service, Ed Belshaw has created a truly fantastic drink, Field Marshall, which has the ability to look fancy and complicated on a menu and in the hand but is easy for any bar to make, his fourth year of entering Ed was bringing experience to back up his serve.

Shake with cubed ice and strain into a coupette. Garnish with a grapefruit coin.

Matthew Galloway from Edinburgh’s Tigerlily had rightly beaten the rest of Scotland to get there, The Beacon is a drink that embraces the idea that less is more is better and squeezes it so hard its eyes bulge a little.

Shake with cubed ice and strain into a coupette. Absinthe spritz as garnish.

Nicole Sykes of Satan’s Whiskers had one of the strongest concepts we have seen with her Ladder cocktail inspired by those that have helped her climb in her successful career, the drink itself has peach in it so you don’t need us to tell you it’s delicious.

Shake all ingredients with cubed ice and strain into a highball glass. Garnish with a grapefruit slice.

Changing Waves from the Artesian’s William Campbell-Rowntree taught us people surf around Newcastle, it also reinforced his absolute love for all things watermelon and whilst surfing in the North Sea sounds horrific watermelon is always delicious, and his cocktail makes it even better.

Shake with cubed ice, strain into a highball glass and top with soda. Garnish with a watermelon peel disc

In short five great drinks and five fantastic presenters with five strong concepts (sorry we should have said that first and saved you all that reading). It was all up for grabs and one of those occasions we were happy we weren’t on the judging panel.

The judging panel (seamless segue, bloody seamless) was equally as strong with Global Bacardi Kiwi Dickie Cullimore joined by last year’s UK winner Chelsie Bailey, industry legend and educator extraordinaire Hannah Lanfear and BeAtOne’s Matt Fleming tasked with picking the one who would represent the UK at the Global Final in Miami.

After some delicious cocktails had got the room nicely lubricated and enough time had passed to make sure the finalists were properly shitting themselves (plus May’s dress had arrived) the lights hit the main stage.

In a great touch, after each presentation a sample of the contestants cocktail was served to everyone in the room, giving everyone the ability to be a mini judge and see the quality on serves these five superb bartenders were creating. As people elbowed their way to the front to get the best view of the stage BarLife positioned ourselves next to the door the drinks were coming from…..

May took to the stage to introduce the first of the five bartenders she had been working with for the last few months, honing their skills and tweaking their drinks, preparing them for this moment. 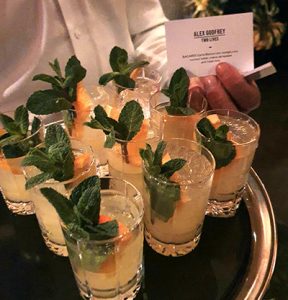 Over the next hour or so the five competitors nailed it. It is not rare or unsurprising at comps of this magnitude that someone fluffs their lines, lets the magnitude of the moment get to them but not last night. Each of them gave fantastic performances, getting across not only their drink and their story but their personality as well. It was mighty impressive and didn’t help in the ‘who do you think has won?’ game that is inevitably played whilst the judges deliberate.

In seemingly no time at all (although the finalists probably have a different view on how quickly the time passed) May was back on stage and calling the finalists up. The winner of Bacardi Legacy 2020 UK Competition and heading to Miami to kick arse is Nicole Sykes.

Nicole was a thoroughly deserving winner and will give the rest of the world a run for their money at the global finals. To be honest there won’t be many tougher opponents out there than the four she beat last night to get her hands on the UK trophy.

A huge congratulations to all five competitors on what was one of the strongest finals we have seen. Again Bacardi put on a hell of a night so thanks to all the team (especially the bar team who never seemed to be in the weeds) and May who once again has got the absolute best from the bartenders she works with.

The five finalists get a trip to New York and Puerto Rico for their hard work and I don’t think anyone can say it’s undeserved. After that? Well…….

The Magic City awaits Nicole as she climbs to the top*