Babycham – The Rise & Fall Of An Icon

These days it is considered naff but it turns out Babycham was a trailblazing product.

We recently produced a crossword based on Chelsie Bailey’s favourite Disco Drinks, on the list was Babycham, in an attempt to come up with a clue we started digging into the brands history and found some fantastic info.

For most people these days Babycham is something that their Aunt Doris drank in the 70’s, in fact it’s probably true that more bartenders these days have a retro Babycham glass from a charity shop than have actually tried the product. Side note:  Babycham glasses are the official rating system of charity shops, as in ‘The Oxfam on Tooting high street is a 5 Babycham glass shop’.

Babycham is of course a sparkling perry weighing in at 6% (reduced from 8.7% earlier in its life), invented by Francis Showering in Shepton Mallet, Somerset in 1953. He had been making and selling the product at local agricultural shows in the 40’s and early 50’s under the name ‘champagne de poire’ but, due to the small bottles it was sold in, it picked up the nickname ‘baby champ’ which morphed into Babycham when it was officially launched in the UK.

It is widely considered to be the first alcoholic brand designed to appeal to women, who had until this point been woefully overlooked and had to rely on the likes of port, sherry or, for the very daring, a half of mild.

Where Babycham really excelled was its marketing. It was the first alcoholic brand to advertise on British commercial TV in 1957. Its advertising catchphrase ‘I’d love a Babycham’ became one of the most recognisable for decades to come.

Its other tagline ended up causing the brand some issues. ‘Genuine champagne perry’ was a line that was used as its descriptor and it, unsurprisingly, led to a couple of court cases.

First up Babycham sued food writer Raymond Postgate (the founder of the Good Food Guide) after he wrote an article in which he tried to warn people off the brand saying it “looks like champagne and is served in champagne glasses [but] is made of pears”. It is a pretty accurate description to be fair to Raymond and as a result Babycham lost the court case, although the judge did say in his summation that the article was defamatory. 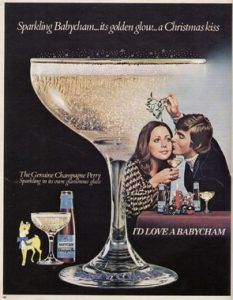 Next up, in 1978, Babycham were taken to court by nonother than the champagne producers of France for the use of the word champagne. This time Babycham triumphed which is not really that surprising given the history of fizzy bottled booze.

The cider and perry producers of the West Country were adding sugar to cider and bottling it up to create bubbles as early as the 17th century. Back then it was only the UK that was producing glass bottles strong enough to hold up to the pressure this process creates. In 1906, nearly half a century before Babycham launched, Bulmers had produced a luxury brand called ‘Super Champagne Cider de Luxe’ which the French left well alone, presumably it wasn’t as popular as Babycham so they let it slide.

By the 80’s the bubble had burst on Babycham, the TV adverts started to mock itself with people ridiculing the person who orders Babycham before deciding it was in fact delicious. The brand limped through the 90’s but had changed from the coolest brand in the country to something your nan treated herself with at Christmas.

With retro being cool these days we think it is time for the return of this ground-breaking product. It’s got everything drinkers in this day and age look for – it’s low abv, affordable, retro, the glasses are very instagramable and it annoys the French. It’s time we all started to fawn over Babycham again.

Pop-Quiz: Tell Us How Your July 4th Reopening Day Went

The government have streamlined the process of applying for a pavement licence in England, making it cheaper, quicker and

BarLifeUK Bartenders' Crossword Each clue contains a line from a song about drink, or drinking. The answer is the name