What do tequila, menus, bagels, pool and GP all have in common? Rookie Programme session 4.

Our home for the day was the fantastic Victory Mansion and it was going to be a busy one. 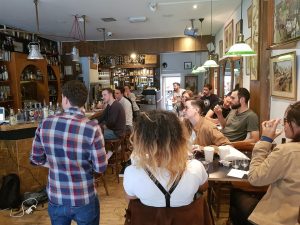 We kicked off the day with the always argumentative session, Cocktail Menus. This is a session that has been a stalwart of the Rookie Programme since Edrington-Beam Suntory partnered up with us 5 years ago.

The thing about menus is they are very personal and there is very little 100% right and wrong things to do…… actually there are quite a few definite wrongs thinking about it.

There are some elements however that have been researched and studied (they tend to be about restaurant menus but the information is largely transferable).

Some make sense, the way a menu is read and therefore where drinks should be placed. For example a drink that makes you a good GP should be at the top (or front) of a menu, these are the spots people will look at first and most. Equally drinks that already fly shouldn’t be placed there as they are going to be popular anyway (a G&T twist, Mojito twist etc).

Some are a bit more hard to believe but hey the research has been done and the people of our world will never fail to confound me. For example taking the pound sign off the pricing and just leaving the numbers helps to stop people thinking of it as money and make it less likely they will make a decision based on price.

Each of the Rookies had brought a copy of their own bars menus and we took some time looking through them before the Rookies plus myself and Edrington-Beam Suntory leading man David Miles went through them all. It was interesting seeing the different styles of menu that different areas of the country have.

Bristol definitely seems to be leaning towards fun, colourful menus that make you smile until you try to read them. London on the whole seems to be going for the less is more, clean, elegant and, let’s be honest, boring motif.

What was interesting was the level of hatred some of the Rookies had for their menus and on the whole they were completely correct in their reasoning and theories. The lesson to take away was definitely bar owners should listen to their bartenders when they are designing their menus.

Next was GP calculation. That’s enough on that subject.

After some pretty tasty bagels it was time to dive feet first into the wonderful world of agave based spirits. There is only one name to call on for this…. Estes.

On this occasion it was the younger of Esteseses that we called on, and, say this quietly, but it my humble opinion Jesse has no surpassed his father when it comes to talking through tequila (although Tomas still crushes him on when it comes to stories).

Jesse has been a supporter of the Rookie Programme from day one, he was one of the first people we went to when planning the programme as soon as Edrington-Beam Suntory got on board. He has always given a little extra for the Rookies and this year was no exception as he brought along a few rare and exceptional tequilas from his personal collection to taste alongside plenty of more standard tequilas and mezcals.

There are certain sessions each year I make sure `I never miss and Jesse’s is one of them. He has grown up in the world of Tequila and his knowledge is just phenomenal and each year he has added a whole new bunch of strings to his bow.

The most remarkable thing about Jesse is his ability to talk about the most geeky and scientific areas of agave and make it relatable and interesting. The Rookies were all fascinated as he went from the basics through to the actual DNA of the agave plant and on into bats. Answering each of the many questions that came his way.

After several hours of talk to a room full of eager young minds most people would run away but not Jesse. He joined the gang at the local pub for a drink and carried on chatting to the whole gang.

A short walk up the road was Original Sin so we descended their stairs and the Rookies did their usual trick of ordering every drink on the menu so they could each try them. The pool tables call was soon too much to resist and we descended. I’m pretty sure I won and seeing as I’m the only one writing this I definitely won and also saved a puppy.

Massive thanks to Victory Mansion and in particular Stu Binks for spending his day off at the bar (hope the tequila helped make it worth it buddy), of course thanks to Jesse. As always biggest thanks of all to Edrington-Beam Suntory for making the whole programme possible.

Next up is the world of rum, what could possibly go wrong?