As the competitors were waking up, grabbing coffees and doing final checks on their ingredients and equipment the judging team were well on route following the first heat in Manchester (full write up here). 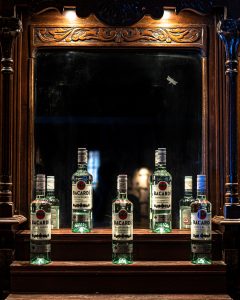 By the time we arrived at Dragonfly (which our expert investigative journalism revealed was the first bar May worked in) the competitors were all on site and the usual buzz of excitement and nerves was filling the room.

Yesterday’s judging team of BarLifeUK, May and Chelsie was bolstered by last year’s Scotland winner Ken Langenfield. After the briefing from May, Chelsie and Ken passed on their words of wisdom to the 15 strong field that were tasked with entertaining us and the crowd for the next few hours.

It is never easy kicking off a cocktail competition but Kat Stanley-Whyte from Basement Bar in Edinburgh did a superb job. Her music inspired Check 62 cocktail was a moreish crowd pleaser and the presentation set the tone for the day.

Another serve that had the judges reaching for taste after taste was provided by Kristijonas Bazys of Glasgow’s Champagne Central. He picked up on an inspiration that has been very popular at Legacy this year – bees and honey. His drink was inspired by a snack he enjoyed during his childhood in Lithuania, with the honey combined with cucumber and kale juices we felt better about the half-time pizzas we destroyed.

This year, the competitors were free to choose between four Bacardi rums for their entry with Cuatro joining Carta Blanca, Oro and Ocho. In Scotland it was definitely Blanca that was the pick of the day.

Ryan Mackie joined Kat and Kristijonas in using it as his base in his drink inspired by his life as a bartender, Orchid Bar in Aberdeen was his first job behind the stick and he is still there today. His ingredients, including calvados and Benedictine, were picked to specifically work with the flavours of Blanca and produced an exceptionally well-balanced drink.

A special mention should go out to the final competitor of the day Juan Orellano from The Savoy. So keen was he to be involved in this year’s Legacy competition that when he realised he couldn’t make the London heats he volunteered to come up to Edinburgh. That would be enough for most but on his journey 3 flights were either cancelled or missed and yet there he was.

It was well worth the journey and his drink based on his Grandma’s cranberry and chocolate cookies was absolutely fantastic as was his very entertaining and engaging presentation. His score was already an impressive one for the London heats before they had even officially started.

What followed Juan’s presentation was one of the longest and most intense judging deliberations BarLifeUK has ever been involved in. The main issue we had was that whilst the standard across the board in the heat was very good, no one (or two) bartenders had really excelled and stood out from the crowd. As a result instead of choosing between the traditional 2 – 4 bartenders we were looking at 6. There were strong words and several folded arms at points but by the end we were all happy with the decision.

The winner hailed from Tigerlily in Edinburgh and went by the name of Matthew Galloway. His drink – The Beacon – was based on a memory from his childhood when he and his brother helped to plant an apple and pear orchard. Much like the Manchester winner Matthew had been through to the heats of Legacy before and made this experience count with a very relaxed presentation with great technique.

The drink balanced lemon sherbet and pear vodka with, wait for it……. Carta Blanca and an absinthe spritz. He claimed in his talk that planting the orchard was ‘one of the very few things I’ve done in my life’, well you can add another thing to that list Matthew, you are now a Bacardi Legacy UK finalist.

This year each heat is also producing a wildcard spot, after the final heat we will pick one of the wildcards to join the four winners in the finals. In this case it was first up and, very nearly, best dressed as Kat joins Ed from Manchester on the list.

Thank you to the team at Dragonfly who not only looked after us but kept the crowd entertained and watered during the epic judges deliberation. As always a massive thank you to the competitors for all their efforts and the supporters for cheering them all on. We look forward to letting you know all about the London heats shortly.