The last of the heats of the Hayman’s True Taste Competition took place in Scotland with a spot in the final up for grabs.

Edinburgh, a city so beautiful not even a batshit early Easyjet flight can take the shine off as you travel through it with the sun shining, was to be hosting the Scottish heat. More specifically the superb The Last Chance Saloon.

As soon as we entered the doors and saw the quality of the competitors we knew it was going to be a great day. It was hardly surprising that field was so strong, Scotland has long been producing great bartenders and the Hayman’s Comp is rapidly becoming one of the biggest competitions in the country.

Despite this only being its second year it feels like it has been around a lot longer and the unique prize on offer seems to have really struck a chord with bartenders across the UK. In essence the overall winner will be getting a gin distilling apprenticeship with industry legend Christopher Hayman and the chance to produce their very own limited edition gin.

Last year’s winner, Jordan Sweeney of The Wigmore, produced an English Hopped Gin with the help of Christopher which is fantastic. You can read all about his experience in doing so here.

Anyway back to The Last Word and the expectant bartenders who wanted their chance to claim that top prize.

As with the previous heats the competition was divided into two rounds, firstly they were charged with producing their entered signature cocktail and explaining the forgotten hero who inspired the drink. The judges for this heat were Chris Bryant-Mansell and Charlie Graham from Hayman’s and BarLifeUK.

Andy, who had judged the previous heats, had said that the quality of the drinks and presentations were particularly high this year and Scotland certainly didn’t disappoint.

After the first round the judges had been treated to some fantastic serves and learnt more than we ever did in any history lesson about some true forgotten hero’s from 1930’s humanitarian Nicholas Winton who saved 669 people in the lead up to WWII to Patrick Bell who invented the Combine Harvester and many more in-between.

As with the previous heats it was the afternoon round that separated out the crowd. Each competitor was invited to come to the bar and pick a classic gin cocktail from a hat (well shaker). The bartenders were charged with making the classic or a twist on said classic, with the likes of Bramble, Army & Navy and Charlie Chaplin on offer.

The banana skin on the day seemed to be people over-thinking their twists and adding too many ingredients into the mix and losing the essence of the original serve.

After some discussions over the obligatory pint the judges had a winner, and that winner was Sam Milne from Ninety Nine Bar and Kitchen in Aberdeen.

Sam produced a fantastic easy drinking twist on the London Calling for his signature round (full specs below) with the inspiration of Howard Carter. Carter lived in Egypt from the ages of 19-59 and discovered Tutankhamun, who according to Sam had a ‘really interesting family tree….. more of a family bush really’.

His simple twist on the Army & Navy swapping out the usual gin for Hayman’s Sloe Gin and adding a little rye to balance managed to keep the essence of the original, taste great and look fantastic.

Sam will be joining the other finalists in London to battle it out over three intense rounds to see who will be crowned the 2019 Hayman’s True Taste Champion. BarLifeUK will be there to report back on the days excitement.

You can read all about the previous heats here and here. 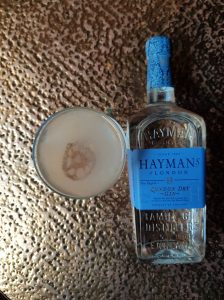 Shaken with a lemon peel, served straight up with a lotus root spritz and dried lotus root slice.

Wednesday 8th July, 4 days after English hospitality was allowed to reopen after lockdown the latest help for the