A competition that asked for creativity found it delivered in spades by the 10 finalists.

Vodka competitions tend to live and die by two key points, the quality of the liquid is obviously vital, an area Crystal Head have definitely got covered. Secondly is the style of the competition, when it comes to vodka competitions (unlike many other categories) allowing the bartenders to go wild tends to result in better drinks and a more enjoyable judging experience. 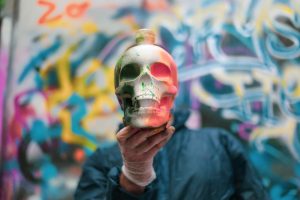 Crystal Head certainly had taken that on board with a concept that encouraged the bartenders to be as creative as possible with their serves. The bartenders certainly didn’t let them down, and as a result we were treated to one of the best competition finals we have ever judged.

The creative element of the competition wasn’t just in the entered drink however, the format itself encouraged creativity throughout.

The first day saw the 10 finalists heading to Graffik, an Urban and Street Art Gallery on Portobello Road. The walls were covered in amazing pieces of art to inspire.

They were tasked with decorating their own magnum of Crystal Head Original and their own canvas. On hand to help was street artist and Crystal Head fan Miki aka Sixmikart who gave the gang some instructions on how to use spray paint and give feedback & advice on their plans.

The level of concentration in the room when BarLifeUK arrived was palpable, you could almost sense the tongues sticking out the side of mouths before you got through the door.

The table in the center of the room was covered in brightly coloured canvas’ and various stencil designs. It was outback in the courtyard where the main action was taking place, the air was thick with the fumes of spray cans and the artwork was beginning to look rather impressive.

Bartenders tend to be naturally creative souls but it seemed that the group had been nervous about the task, they needn’t have worried, we were very impressed with what we saw. The Crystal Head and tonics probably helped the creative flow, although from what we saw not as much as Miki’s patient advice.

To add another twist to the experience, the following day each competitor would have to produce a second cocktail inspired by their artwork. That was tomorrows problem, for now the bars of Portobello Road needed to be visited to get some well-deserved relaxation going.

Bright and early the next morning the 10 bartenders found themselves in the beautiful surroundings of the Do Not Disturb Bar at the Vintry & Mercer Hotel. The format of the day was simple, the morning had each competitor making and presenting their signature serve cocktail, the afternoon saw them each showing off their art and the drink it inspired.

Each competitor would have 15 minutes per presentation to impress the judging panel of Crystal Head’s Chris ‘Munky’ Baldwin and PJ Jaurre as well as BarLifeUK. The rules for the drinks were simple, they must contain Crystal Head or Crystal Head Aurora…… that was it.

Very early on in the day we discovered that the corn strain Crystal Head use, Peaches & Cream Corn, was something that resonated with the bartenders. One of the most original interpretations on this theme belonged to Tom Godfrey from Filthy XIII in Bristol.

He was inspired by the Peach Blow Fizz from the Savoy Cocktail Book, a drink which stands out due to its complete lack of peach, using strawberry instead to achieve the flavour and colour. Tom’s drink used strawberry and vermouth syrup & strawberry water acid for the strawberry element as well as a peach tea, this was then clarified with milk and looked almost as good as it tasted, it deserves to be the drink of the summer.

As you’d expect it wasn’t all about the drink, the presentation counted for a lot as well. In Elliot Skehel from LAB 22 in Cardiff in his first comp final, a natural presenter was unveiled. From the off he had the crowd entertained, pointing out with his drink that ‘Crystal Head pride themselves in having no oils in their vodka, so I’m going to add some oils to my drink!!’.

Being creative without overdoing the ingredients and maintaining balance is not an easy task. Across the board it was a job that all the competitors did exceptionally well. Toby Heap from The Wilderness in Birmingham has been pushing the boundaries for many years now and his Emerald Dawn serve was no different.

A drink with contain Crystal Head Aurora as well as star anise distillate, fir vermouth, spruce tip syrup, cloud berry syrup, Suze and a ph5 acid solution was a stand out. The homemade ingredients balanced perfectly and still allowed the Crystal Head to come through.

After a well-deserved lunch it was onto the art and cocktails round. Luckily for everyone involved the marking of the art had been taken care of by Miki, but the drinks were all ours and there was still all to play for.

Amber Blood from Callooh Callay in London got a high score for the artwork based around her Oma (grandma) whose amazing life included working on an underground mushroom farm and as a Playboy bunny. The drink, a twist on a Grasshopper with a tonka bean syrup and green chartreuse was one of the drinks of the day.

One of the most personal and emotional presentations I’ve seen in a long time came from Tom Sutton from Her Majesties Secret Service in Bristol. His Totterdown Tallboy was inspired by a rough time in his life and his spiced apple cordial is one of the taste sensations of the day, the drink, unsurprisingly, was fantastic and the nod to his bartending friends in Bristol a lovely touch.

As always the judges had to have a wee argument over a beer to sort out the winner but one person emerged as top of the pile. His second drink inspired by the skull bottle and Mayan cocoa ceremonies was a heady mix of flavours in a clarified milk punch style serve and his artwork was the joint highest score of the day.

It was going to take a hell of an effort to beat a field of bartenders all on the top of their game both in flavours and chat, that honour went to Toby Heap.

Across both rounds Toby excelled and it was a well-deserved win that sees him heading to Vienna with £1K in his pocket and a whole load of other adventures in the coming year with Crystal Head.

As we said right at the start this was a competition of the highest standard, a feat which is much harder to pull off than it sounds. A huge congratulations need to go to the Crystal Head and CASK Liquid Marketing teams for making this happen. The bartenders themselves also need special mention not only for their effort but for the camaraderie and support throughout the two days.

Stirred down and fine strained into a Nick & Nora. Served on a winter forest scene.

Combined them 125ml milk and 25ml fruit acid added to clarify. Served over block ice in a traditional vessel and garnished……. well like in the picture:

Wednesday 8th July, 4 days after English hospitality was allowed to reopen after lockdown the latest help for the