Last week over two intense days 20 bartenders duked it out to find out who would be crowned World Class GB champion.

Previously, a record number of entries had seen 100 competitors chosen to be visited in their bars, before the final 20 who were to compete across three challenges were selected. These 20 bartenders from across the country had already beaten many to be here, but it was the final push that was undoubtedly going to be the toughest. 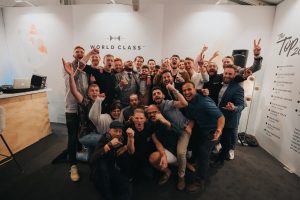 Day one saw two challenges. Firstly Ketel One asked them to showcase a chosen British ingredient and maximise its flavour by utilising techniques of flavour extraction or manipulation to create a serve.

Following that Singleton whisky was centre stage asking the bartenders to take inspiration from a country they had visited using the idea of exploration, travel and adventure.

That evening they were treated, rightly so, to a rather magnificent meal hosted by Zacappa. Flown in for Taste of London by Zacappa was the current darling of the restaurant scene South African chef Kobus van der Merwe of Wolfgat, which has just been awarded Restaurant of the Year at the inaugural World Restaurant Awards.

Not only did he and his brigade produce one of the best meals I’ve ever had the pleasure of eating (the fish ‘taco’ would be worth the trip to South Africa alone) but Kobus was on hand to introduce each dish to the lucky guests.

During the dinner BarLifeUK had the chance to catch up with the competitors to see how they felt about day one. The split of which of the challenges they enjoyed most was pretty much 50/50, seemingly dependent on their style of bartending (the story tellers leaning towards Singleton and the more technical stick-wielders preferring Ketel One). There was however a general confidence over the next days final challenge, the speed round.

Less than 24 hours later several of the 20 were to learn a very important lesson, never underestimate a speed round.

Day two started with a nice relaxing cruise up the river will a Belsazar tasting by creator Sebastian Brack and Brand Ambassador Adam McGurk (who also knocked up a very tasty breakfast). It was without doubt the calm before the storm.

The World Class Bar at Taste of London was to host the final challenge with consumers encouraged to watch and cheer on the competitors, a select few even got to join the judging panel.

The format was simple. Make 5 drinks in 4 minutes. There were 5 categories – Gin, Tequila, Whisky, Bourbon, and Vodka (which BarLifeUK was in charge of), each category containing 3 cocktails (in the case of vodka – Espresso Martini, Bloody Mary and Dutch Mule).

Competitors were invited up in pairs, one drink from each category picked for them both to make and a coin toss to see which competitor got the first 2 minutes to speak and which the second. Five minutes set up time and then a 3,2,1 and off they went.

Sounds simple enough…. However this was a new bar, there were 6 judges, 18 competitors and dozens of consumers watching on. One of those judges was Erik Lorincz, one of the drinks he was judging was a gin martini, if that doesn’t put a bit of fear into your stomach then something might be wrong with you.

Added to all of that was the fact that they had to talk through the drinks and compete with Dave Beatty and Deano Moncrieffe who someone had decided to give microphones. The two MC’s did a great job keep the crowd and judges entertained and were on hand to help any bartenders who had a case of mind blankness.

We didn’t count but around half of the 20 competitors managed in varying levels to not get all 5 finished drinks up in the allotted 4 minutes. In some cases it was simply a missing garnish or two in others a missing drink or two….. At one point in the melee a competitor started making a Whisky Sour before getting distracted and finishing it off with the Bloody Mary ingredients, we can attest that a Bloody Mary Sour is not a new classic.

The other half, however, were more than impressive, one competitor even having time to nip out back and return with a bowl of twiglets for the judges. The drinks these bartenders put out not only tasted great but looked like the real deal. Even with the patented Lorincz Martini Stare in full effect.

That was it. Months of planning, weeks of preparation and days of intense competition was over. All the judging sheets were in. Calculators were working overtime out back. The competitors grabbed well-earned drinks.

Thankfully World Class is a well-oiled machine so the competitors didn’t have to wait too long to find out their fate. The team tasked with the announcement were last years GB winner Dan Warren, Head of World Class UK Jack Sotti and previous winner, now Diageo Brand Ambassador Ali Reynolds who, for once, had some pearls of wisdom for the 20 finalists:

‘Thanks to the past two days no matter what happens in this announcement you now all have 19 new barstools available to you throughout the country, and that is a special thing.’

When the winner was announced there was a huge roar from the 20, limbs were going everywhere, cameras were flashing and then lifted into the air above the crowd of bodies was the 2019 GB World Class Champion Cameron Attfield from Disrepute in London. 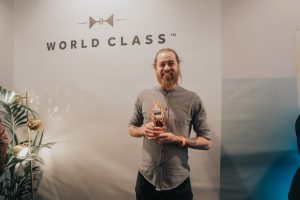 It was an amazing effort from him however we have sat down and spoken to Cameron in more detail which you can find here. So we won’t dwell on his fantastic achievement right here.

He would be the first to want to acknowledge the other 19 competitors and the amazing effort they all put in. We have spoken to the judges of the other challenges and it is obvious that everyone made a mark in at least one of the final rounds. Throughout the day it was obvious to BarLifeUK that they had all grown close within the pressure cooker of the final and nothing showed this more than the joy on their faces as Cameron basked in his moment.

Of course there will be sadness and disappointment to come but at that moment it was a celebration. This is all down to Jack Sotti, the Diageo BA’s and the rest of the many people behind the scenes at World Class that pulled off a very memorable few days and found a winner that will definitely be a force to be reckoned with at the Global Finals in Glasgow later in the year.

We will be on hand to bring you news of his progression there but in the meantime check out a bit more about the GB representative here.