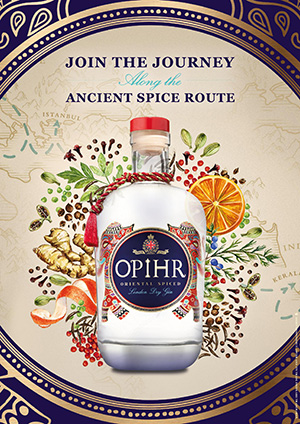 The Opihr Spiced Gin Global Cocktail Competition has returned for 2019, and this year bartenders are invited to submit a twisted gin classic influenced by competitors’ local ingredients.

Opihr’s mission is to take consumers on a ‘journey of discovery’, which is reflected in the theme of this year’s competition. Open to bartenders in the UK, USA, Germany, Australia, South Africa, and the Netherlands, the locally-influenced drinks submitted to the Opihr global comp will form a flavour map of the globe.

The rules of the competition are simple – create a twist on a classic cocktail, using at least 35ml of Opirh spiced gin. The cocktail should have no more than 5 ingredients, one of which must be locally sourced, in order to bring a sense of locality and provenance to the serve.

Entries from each territory will be shortlisted by the Opihr judging panel, and successful bartenders invited to attend their nearest regional final (taking place between July and August 2019). The regional finalists will then be taken to a mystery destination somewhere along the ancient spice route for the global final.

The overall winner will be named ‘The Spirit of Opihr’ 2019, and will be given the opportunity to work with Opihr during the following year, and help shape the brand’s ongoing drinks strategy, alongside the opportunity to get involved with future projects.

Last year’s competition was won the UK’s very own Charley Carrington of Cottonmouth bar in Nottingham. Charley prevailed at the grand final in Istanbul, which was judged by a panel that included Simone Caporale, Ondrej Pospichal, and Aaron Pollack (2017 competition winner). She says of the experience: “Winning last year’s competition was the most incredible feeling, and the journey hasn’t stopped there! I’ve had an amazing year working with the OPIHR brand team on cocktails, events, and the new drinks strategy: the OPIHR Drinks Atlas. I would highly recommend entering; it’s an adventure you’ll never forget.”

Robert Milton, Global Brand Director for OPIHR Gin comments; “2019 sees the OPIHR Global Cocktail Competition enter its sixth year – and every year it continues to grow in popularity. As OPIHR expands around the world, we are successfully connecting with bartenders by offering them a truly unique flavour in premium spiced gin, together with a fantastic competition in which to showcase their skills. Good luck to everyone who enters this year – we really look forward to meeting our finalists in September.”

Create a twist on a classic cocktail using at least 35ml of Opihr Spiced Gin. The cocktail should have no more than 5 ingredients. One of the ingredients must be locally sourced, and bear in mind the theme ‘journey of discovery’.

Post a photo of your entry on Instagram, including the cocktail name and recipe, tagging @OPIHRGin and using the hashtag #OPIHRWorld.