Described by its makers as the word’s first Añejo Claro tequila, Don Julio 70 will be available to UK bars towards the end of May, 2019. 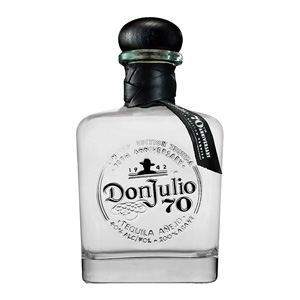 Launched into US markets in 2011, Don Julio 70 was created to celebrate the 70th anniversary of year distiller Don Julio González began making tequila. Jalisco highland blue agave is distilled and then aged for 18 months in American Oak, before passing through a filtration process that: “restores the citrus, fruity and raw agave notes that are most commonly apparent in Don Julio Blanco and balances these flavour profiles with the complexity and depth that exists in Don Julio Añejo.”

The result is a clear liquid said to maintain notes of vanilla, honey, and toasted oak typical of an Añejo tequila.

Positioned primarily as a sipping-quality tequila, Don Julio 70 also has a place in cocktails, with Diageo Reserve suggesting a White Negroni perfect serve:

Rich Larkin, Head of Diageo Reserve GB, says: “We’re delighted to introduce Don Julio 70 tequila to the UK. This first-of-its-kind tequila showcases the talent and skill of Master Distiller Enrique de Colsa who has created an Añejo Claro to challenge conventions and support the growth of super premium tequila in the UK. It’s a masterpiece of innovation.”

In related news, Diageo Reserve have announced that Don Julio 1942 is now available to UK bars in 1.75 litre bottles, with an RRSP of £400 a pop.