Brooklyn Defender IPA will be from the end of March, 2019 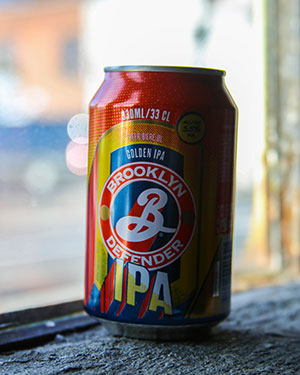 BarLifeUK have long been fans of Brooklyn Lager, particularly when consumed as the fizzy bit of a Boilermaker, so we were interested to learn that another of Brooklyn’s brews is coming to the UK.

Defender IPA (5.5% ABV) is described as a ‘golden IPA with notes of rounded bitter hops, tropical fruit, and an incredibly dry finish’. The IPA will be available in 330ml cans and on draught. Brooklyn Brewery’s brewmaster Garret Oliver says: “Defender IPA is created with the belief that beer should be interesting, delicious, accessible, unpretentious, and downright fun. It has plenty of hop intrigue for aficionados and smoothness for newcomers. A real all-rounder.”

Sounds tasty, and as you would expect, the can design is sexy and will likely call out to thirsty punters during this Summer’s inevitable heat wave.