During London Cocktail Week Ocho and Vantguard launched Curado, with so much going on not all of you would have been able to go along so we thought you might like to win the full collection.

As it turns out back in February of 2012 we did a giveaway of the first iteration of Curado, it’s been a long wait for this unique product to be more than a one off project. Vantguard (the team who brought you Gin Mare, Ysabel Regina etc) have teamed up with Tomas Estes, Carlos C. Camarena and the rest of the Ocho team to bring this product to the masses (only 460 litres were made back in 2012). 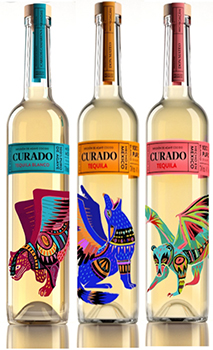 Curado is inspired by the local fermented drink Pulque which has been enjoyed in Mexico for over 1,000 years. Its flavoured variations are known as Curado, giving this product its name.

As you would expect from the Ocho gang the production of Curado is designed to celebrate the very best of the agave plant to produce a totally new type of product. Whilst Blue Weber Agave’s are at the heart of the product it is the use of other varieties of agave that help create a different type of taste.

As well as the use of different varieties of agave, the production process itself sets the brand apart. Agave’s are harvested from the wild in their place of origin, it is then cooked using the technique specific to that region. This cooked agave is then taken to the distillery and infused into Blue Agave tequila.

The ratio of the tequila to agave and the length of infusion time is dependent of the type of wild agave being used but all are infused for a minimum of 5 days in stainless steel tanks. Each of the three varieties are bottled at 40% ABV.

The three varieties and their tasting notes are:

Like Ocho, Curado is being looked after in the UK by Cask Liquid Marketing and they have a set of all three expressions to give away to one lucky reader. Simply fill in the form below to get your name in the hat.