In Featured, Learning and Competition Prep

How can a competitor impart brand knowledge without saying the same thing as everyone else?

The following text is an extract from The Cocktail Competition Handbook 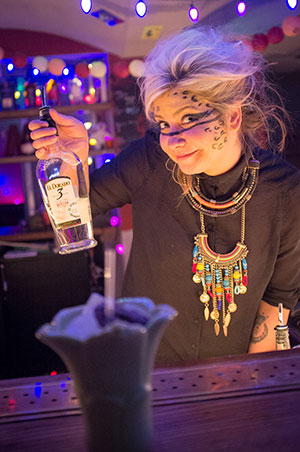 Someone you have met once or twice secretly thinks you are lovely, and wants to put bits of you inside bits of them, so they do some light Facebook stalking and find out you are into Eagles of Death Metal. The next time you are both in the same room, they nervously approach, and while staring you intensely in the eye, recite the date the band was formed, names of the members and their dates of birth, and their entire discography. Unless this person is really, really hot, you probably won’t put out.

Same scenario, same person, but this time they casually engage you in a relaxed conversation about music, steering it towards Eagles of Death Metal. When you say ‘Ooh, I like them’, they say ‘Hey, I’ve got tickets to see them tonight, wanna come?’, and you say ‘I’d love to!’ and then you have lots of sex, buy a puppy together and post a really fucking annoying number of photographs of it on Facebook.

For everyone other than your Facebook friends, the second scenario produces better results, and the process is exactly the same with brand knowledge in comps.

On average, half of the competitors in a heat will spend two of their five minutes pacing behind the bar, reciting the history of the brand in exactly the same way the three competitors before them did. Not only are they wasting time that could be better spent making their drink, they don’t stand out from the crowd. Instead, you should emulate the suitor in scenario two, and sift through all the information available about the brand, identify a killer angle, and weave it into the fabric of your presentation, so that it underpins everything else you say and do during your presentation.

In scenario two, the suitor achieved a good result because they learned the object of their affection liked Eagles of Death Metal, so they researched the band and found one key piece of information – they were playing a show that night.

It is exactly the same with competitions. A hour spent on Wikipedia and the brand’s website will provide you with an enormous amount of information, it is then up to you to decide what you need to focus on. But how do you do this?

In some cases, it will be overtly stated in the competition brief. For example, a brief might say ‘create a drink inspired by the terroir of our vineyards’. In this instance, you can forget about history, and find a way to concentrate on geography and flavour that no-one else will have thought of.

If the brief is vague, or if it has thrown the onus back on you by saying ‘express yourself’ in some way or other, you need to look a little deeper to identify what the brand is interested in at this moment in time. Good places to start would be trade magazines and websites – have they written any stories about marketing campaigns the brand has recently launched, or new products, or personnel they have hired.

If this approach doesn’t yield any clues, speak to the brand reps and ambassador. Ask them what projects they are working on, and what they are telling bartenders in their training sessions.

The point of this is: to win consistently, you need to go the extra mile. Don’t just recite a list of facts and figures like the sweaty stalker in scenario one. Find a killer angle, and weave it into your presentation like the puppy-lover in scenario two.

Why is this important? 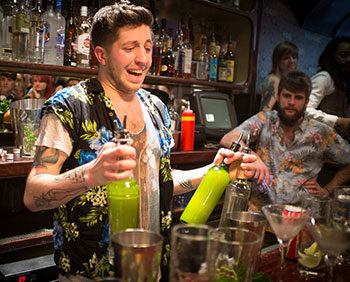 On paper, the way you demonstrate knowledge of the sponsor brand will account for about 20% of your marks. In practice, it’s more complicated.

The standard heat judging panel will consist of two independents, often a journalist and a previous winner of the comp, and someone from the brand. The independents will be much less concerned about the brand knowledge category (predominantly because they don’t know much of it themselves) than, say, how the drink tastes, and are likely to score it generously – drop a few pertinent dates and something about production methods, and you will get high marks from them.

However, the brand judge will have a much closer eye on this category, and if at the end of the competition things are tied, or very close, it is likely this facet of the presentations will cause them come down on one side or the other. At a regional heat, with a panel of two independents and one sponsor, this is less of an issue. However, should you progress to the later stages of a competition, especially a global one, you will find that the panel changes, with more people affiliated to the brand acting as judges. It is at this point that the importance of the brand knowledge category grows exponentially.

With this in mind, it is fair to say that the brand knowledge category is both overtly important, and has a subtext:

Overt importance: It accounts for 20% of your marks, and can make the difference between winning and losing in a close heat.
Subtext: Sponsor brands sometimes place more significance on this category than the marks attributed to it might suggest.

The inspiration for your recipe will probably come from one of three areas:

If you find that inspiration for your drink comes from the sponsor brand’s history, be very conscious of not veering away on weird tangents that end up delivering no substantial brand knowledge. At BarLifeUK, we call this ‘Pirate Syndrome’. If we had a pound for every time we have judged a bartender who believed they were delivering a presentation about a Caribbean rum, but who in actual fact talked about pirates for five minutes, we could afford to pay for our own drinks at The Artesian.

• Don’t recite a list of facts and figures, that’s what everyone else will do
• Look to trade press and brand staff for clues at to what the brand is interested in right now
• Once you have found your killer angle, weave it into the fabric of your presentation
• Don’t go off on weird tangents