Uncle Nearest 1856, The Story Behind The Brand

Spirit brands love a story, history is caressed and spotlights are shone on key events. Rarely however does a brand as new as Uncle Nearest 1856 have such a compelling story to tell. 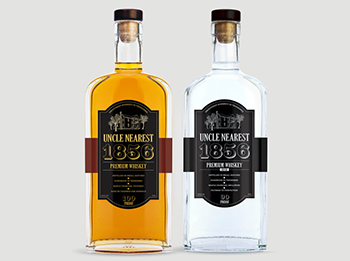 You may not have heard of Uncle Nearest Premium Whiskey before, but you will definitely have heard of one of two people at the heart of the story, Jack Daniel. It is actually the story of Jack Daniel’s and the caressing of its history that helped to inspire Uncle Nearest’s founder Fawn Weaver on her journey.

The story starts in Tennessee in the mid 1800’s when Nearest Green, a slave working for preacher and distiller Dan Call, was introduced to a young orphan by the name of Jack Daniel. Nearest Green was rented by Call to help out on his farm, but not much is known about his life before this time other than he was bought from Maryland.

Nearest Green was a very talented man when it came to whiskey making and was instrumental in the evolution of the Lincoln County Process (the art of filtering/steeping new make whiskey through charcoal). Whilst the LCP had been around, in a primitive form as early as the 1700’s, Nearest took it to the level we know today.  Dan Call is quoted as saying ‘Uncle Nearest is the best whiskey distiller I know of’ and wanted him to teach Jack all that he knew.

Over the years this teacher and student relationship turned into one of the greatest and most unusual friendships in the history of whiskey production. The Call farm eventually became the home of the first Jack Daniel’s distillery and Nearest Green became the brands first Master Distiller.

It is this last fact which had, until recently, been lost in the history books, until Fawn made it her mission to bring it to light. Nearest was not mentioned during any tour of the Jack Daniel’s distillery and not listed as a Master Distiller at their visitor centre.

Fawn decided this needed to change and spoke at great length to the Jack Daniel’s distillery. She is quick to point out that credit should be given to the distillery for altering the tours and correcting these mistakes so quickly once they were raised.

It is fair to assume that Jack himself would have been unhappy at this oversight. They were firm friends and, despite the racism of the time (especially in the American South) would often be seen walking thorough the town together. A sight that would have been even more striking when you consider that Jack was about 5”2 and Nearest over 6”.

Their families also got on well and in actual fact at least one member of the Green family has worked at the Jack Daniel’s distillery ever since those early days. In the first ever book about Jack Daniel, Jack Daniel’s Legacy published in 1967, there are 50 mentions of Nearest/Uncle Nearest and his sons Eli & George.

The continuation of the importance of family was very important for Fawn when she decided to launch a brand in honour of Nearest Green.

The first step was buying the land that Call had once owned and the site of the first ever Jack Daniel’s distillery, setting up her office there in the farm house. Very early in the process she decided that she needed to give something back to the decedents of Nearest Green.

Fawn and her husband Keith set about founding the Nearest Green Legacy Scholarship, which pays in full for college for any qualifying descendent of Nearest. It was actually the couple that paid themselves for the first two applicants, including tuition, text books and fees. They now have 8 decedents studying as Undergraduates and 2 at Grad School.

The 50th anniversary edition of Jack Daniel’s Legacy is available on Amazon with all proceeds going to the Nearest Green Legacy Scholarship.

They also held a big event on the site of the old distillery for almost 100 of the decedents who were treated to a display of pictures and other documents that Fawn had collected (part of the 10,000 documents she found) on the history of the family. They then all went to the still flowing water spring that was used in the production of Nearest’s whiskey 150 years ago to have sip of history.

Fawn has met all of the known decedents of Nearest and has some fantastic stories about them. From his Grand Daughter who turned 108 last week to Miss Helen the Grand Daughter of Nearest’s son George (who is the one in the photo sitting next to Jack, often mistaken for his dad) who grew up in George’s house and has many tales of life as a Green. Miss Helen sadly passed away recently but Fawn spoke at her funeral re-telling some of those memories.

To make all this happen however you obviously need a really good product to sell. Neither Fawn (a best selling author) or Keith (Executive Vice President at Sony Pictures) had any experience of distilling when they embarked on their journey so when they needed some help there was only one family they could turn too.

Fawn was actually tracked down by a descendent of Jack Daniel who has worked in the whiskey industry for three decades, she got in touch and said “If you ever decide to do a bottle honoring Nearest, I will come out of retirement to help.”.

Although the brand was launched last year (to huge acclaim) the distillery is yet to be completed, they have been using liquid from two other distillers made to their specifications. However the plans for the new site are pretty impressive.

Not only will there be a distillery and 5,500 barrel rickhouse on-site (as a show of their success, this has increased from the originally planned 3,500 barrel size) but, due to the nature of the recipe for the Silver, which includes corn malt (the silver and aged have two different mash bills), a malting house will also be built.

There was going to be 100 acres of corn planted on site nicknamed the ‘Field of Dreams’ however this is being reduced, much to Fawn’s displeasure, for other plans.

There will also be an interactive gallery showcasing the history of African American Distillers and, of course, Nearest Green himself. To top it all off their will be a 1,000 seater live music venue to showcase country music artists built in the old Horse Auction site.

That’s not all. One advantage of the location is that they will be able to serve booze on-site with Uncle Nearest cocktails and beers the order of the day. One aspect Fawn is very happy about is the fact that Lynchburg’s most famous restaurant, Barrel House BBQ, will be opening their long awaited 2nd site on the distillery grounds.

Having met Fawn on a couple of occasions and seen her passion and attention to detail there is no doubt that it is going to be an amazing site and one you can visit…… all expenses paid.

To launch in the UK Uncle Nearest have created a cocktail competition with a trip to Tennessee to visit the distillery up for grabs. The comp is only open to London bartenders currently but will be rolled out nationwide at the start of next year. For all the info on the comp click here

If you need anymore inspiration here is a link to the Founders Tour video to give you a glimpse of the sort of thing you can expect if you get yourself on that plane to Tennessee.