In the last couple of weeks of his Bacardi Legacy campaign Leon Back hit another level to ensure that the Queen Street cocktail becomes a classic.

When you are lucky enough to live in the town which hosts Tales On Tour in the middle of your Bacardi Legacy promotional campaign you would be forgiven for rinsing the hell out of it. Using the opportunity of all that press and international attention to highlight your drink and push yourself towards victory would be more than understandable. 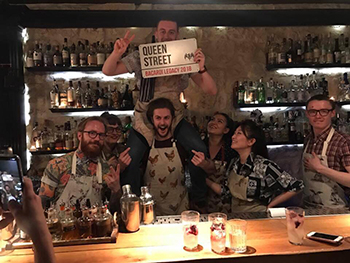 However that is not Leon’s way. It is also not the Legacy way. So what did our intrepid UK Bacardi Legacy Finalist do? Well, he held a big party in his bar with a bunch of his fellow finalists (competitors) to help them promote their drinks of course.

The Class of 2018 Event at Panda & Sons gave finalists from across Europe the chance to showcase their cocktails and Legacy stories. Those in attendance were:

If there was ever an event that showcases the true heart of Bacardi Legacy it was this, and from all accounts it was a hell of a night. According to Leon everyone had a ‘Barry of a time’ which we can only assume is a good thing (they can be a bit confusing those Scots).

As well as the Class of 2018 event Leon completed his European tour with four more guest shifts. He jumped over to Two Schmucks in Barcelona to work alongside former Panda & Sons bartender Dane Smith as well as Moe Aljaff, Danil Nevsky and AJ White. 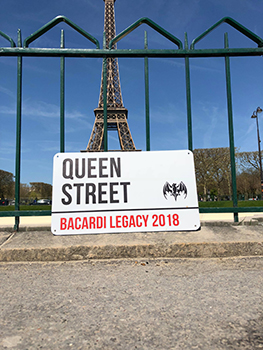 After that came Paris with two guest shifts in one night at Little Red Door and Bonhomie with Rory J Shepard and Clavin Politi.

He ended his epic adventure with a night at Amsterdam’s newest hot bar The Flying Dutchman. It’s a bar we can’t wait to visit and a great way to finish the tour alongside Timo Janse and Tess Posthumous.

Having been with Leon every step of the way since he first made the cocktail for us at the Scotland heat and seen what he has done over the last few months we are here to tell you he is the real deal. He has every chance of making the final eight this year and from there….. well who knows, but his drink, presentation, campaign and personality can definitely get him that trophy.

Leon has asked us to pass on his thanks to everyone across the UK and Europe who has helped him over the last few months, he’ll buy you all a drink when he gets back from Mexico (we may have made that bit up).

We look forward to letting you know all about his Mexican adventure soon. Good luck buddy.

Hot on the heels of the recent announcement by London Cocktail Week of their plans, RumFest has also confirmed

What To Do When Coronavirus Strikes Your Bar – by Lyndon Higginson

Lyndon Higginson is one of BarLifeUK's (and probably the industry's) favourite people. We first met him 10 years ago

Overnight it all changed for our friends up north, this morning all we can do is wish them well. There