Leon Back, The Queen Street Cocktail & His Bacardi Legacy Journey

With the global final of Bacardi Legacy 2018 rapidly approaching the competitors are ramping up their promotional campaigns.

3 months ago in Amsterdam Leon Back from Panda & Sons in Edinburgh beat 5 extremely strong competitors to become the 2018 UK Bacardi Legacy Champion. It was Leon’s third attempt in a row to emerge victorious, so it is no surprise that since then he has been busy planning the promotion for his Queen Street Cocktail ahead of the global finals in Mexico in May.

For those unfamiliar with the Bacardi Legacy concept, the competitors are judged not only on their drink and the on stage presentation, but also on the promotion of the cocktail in the run up to the finals. In a competition full of such talented bartenders and fantastic cocktails it is the smallest details that can often make the difference and nailing the promotional campaign is imperative if you want to emerge victorious.

Having caught up with Leon a few times since Amsterdam we know how hard he’s been working and having someone as experienced and enthusiastic as UK Bacardi Ambassador, Metinee ‘Replicabilidad’ Kongsrivilai, in your corner is only going to help. We have been privy to a lot of the ideas which are soon to be unveiled and will be bringing you all the news as it happens, but in the meantime we had a chat with Leon about what he has been up to recently.

BarLifeUK: So two big events under your belt so far, what’s been going on?

Leon Back: Two guest shifts and a staff seminar done in London Cocktail Club Oxford Circus. It got a cracking response from everyone, not only from the LCC team, but the bar community in London as a whole.

I did a talk for the LCC Staff which they really enjoyed and got stuck in with the interactive format of the talk/mini seminar. Lots of questions and as Robb {Collins, fellow UK Legacy finalist} told me beforehand lots of very keen young bartenders who are all interested not only in the Queen Street but also are interested in giving Bacardi Legacy a go next year. As always Robb was a gracious host and great fun to work along side.

BLUK: The second event was a bit further away?

LB: Yeah, it was in a beautiful new venue called Atelier in Brno in the Czech Republic. I had an amazing time there learning so much about the local culture, food and drinks. As well as so many amazing local products, the staff behind the bar were amazing hosts for myself and my partner in crime for the night Zdenek Kubu, a fellow Panda and Sons bartender.

The bar itself has the cocktail bar and amazing kitchen working side be side during service, it was interesting to step behind a bar and make sure you don’t bump into chefs with hot pans moving around! The most amazing thing was the hospitality shown by the staff at Atelier, they gave us a family style meal with a brief before that start of service which is something I have never experienced before. During service I taught them about Queen Street and they taught me about Czech hospitality. It was very special.

BLUK: Nice to have Robb supporting you in London, was it a surprise that one of your competitors for so long was one of the first to help you out? 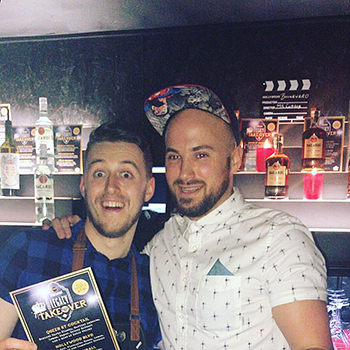 LB: It is so amazing to have Robb supporting the Queen Street Campaign and being able to work alongside him and seeing what he does down in London. All of the finalists got on very well and we became a little unit in Amsterdam. All the guys have been awesome at supporting and encouraging me in the journey of Queen Street and have offered their help in any way they can which has been amazing. I can’t thank them enough for being behind me and helping push me to represent the UK as well as possible in Mexico.

BLUK: Did the crazy weather in Scotland slow you down?

BLUK: Each year the competitors tell us how much they love working in other peoples bars when promoting their drink, is that the same for you?

LB: Absolutely. I love going behind others peoples bars for many reasons. I find it amazing to see how peoples creative processes work, watch them do their thing and serve their guests with their own unique charm, which opens my eyes to things I maybe never thought of before.

I also get to meet so many amazing people from guests, to other bartenders and hospitality staff from all over the world, and they all have great stories to share. I also love spreading my message of where I’ve come from as a Scottish bartender who has never before worked outside of Scotland. Showing that journey and my 3 year Legacy journey whilst sharing my three key principals of Education, Collabaration and Innovation which I built my legacy upon (a video explaining these principals can be found at the bottom of this article).

BLUK: How’s the Queen Street been going down on your travels?

LB: It’s been received really well everywhere I have gone so far. Everyone not only loves the flavour and style of the drink, but they can see this becoming a classic cocktail which is extremely humbling. I has truly become a piece of myself this cocktail, and people have been really enjoying what it stands for and drinking it too!

BLUK: What have been the highlights from your adventures so far?

LB: My highlight from London was definitely having the room full of people in LCC and really taking that atmosphere they are known for – great music, great drinks and swinging lights with a general attitude of having fun. From Atelier it was the incredible tasting menu Milan, the bar manager, took us through with drinks pairing to match. It was a showcase of simple, inexpensive and incredible food and drinks given with a lot of love by the people who made them. Was truly special. 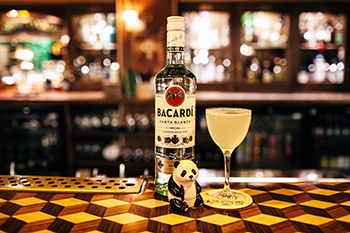 Add all ingredients except Whisky into shaker. Shake, then fine strain into chilled Nick and Nora glass. Spray 3 spritz of Islay Whisky on the cocktail glass (one directly above, one on the side and one on the base of the glass). Serve.