We have always been in admiration of bartenders ability to repeatedly create tasty and innovative drinks, and serves, in every cocktail competition we judge (and, let’s be honest, that’s a fair few). However when we sat down in front of the competitors in the Seedlip NA competition across the nationwide heats we reached a brand new level of appreciation. 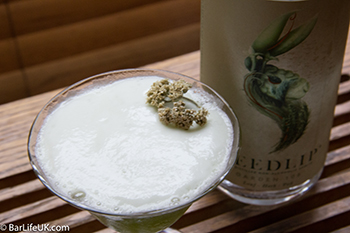 You see everyone has a fall back, a crutch, and not just in bartending. Football managers will have a set piece, stand up comedians have a heckle put down up their sleeve, Oasis have 3 cords and an estate agent has…… okay there is an exception.

The thing is a bartenders fall back is almost always alcoholic. Struggling to balance a drink? Chuck in some creme de peche, a splash of sherry, perhaps some Chartreuse. However they all have those three letters that don’t work here – ABV.

Heat after heat, bartender after bartender we saw creative solutions to the problem. Ideas that stretched the bartenders abilities and thought processes. Ideas that they will undoubtably use going forward in their careers and ideas that really got us, and the other judges, thinking.

After the heats we arrived at six finalists to compete in the grand final.

Rob Simpson from The Clove Club embraced Seedlip and it ideology, combining the natural ingredients of yarrow and cucumber with the scientific in the form of malic and citrus acid solutions. Both Alan Taylor from Dean Street Townhouse and Luca Rapetti of Brown’s Hotel used an ingredient we believe will crop up a lot in 2018, verjuice, to add depth to their creations.

However this competition is more than just the drink. The prize gives the winner a plot of land, on Seedlip creator Ben Branson’s family farm, to grow the ingredients to create their own limited edition of Seedlip. As a result the story of the drink, it’s link with nature, it’s journey from farm to bar was equally important.

Niall Burgess, in his first ever competition, really embodied this ethos with his story about  the brand and his ingredients, including spearmint, white grape and tarragon. Dandelyan’s Jack Wareing was supremely passionate about his garden in Wandsworth with numerous ingredients in his drink coming directly from his little patch of green. Massimilian Terrile from Duck & Waffle also focused on his personal garden however this time it was his childhood that inspired his Red Snapper twist.

These six will be at Dandelyan on Monday 15th January to compete in front of an esteemed panel of judges. They will be asked to create an Autumn Cocktail with a suggested seasonal food pairing.  Just one rule, everything must be from these green & pleasant lands.

They will also all be asked to present ‘Your Seedlip’. To explain their vision for their own limited edition Seedlip, not only the flavours but also an idea for the signature serve and marketing thoughts to engage the on-trade.

Having seen the effort they all put into their serves and presentations in the heats we are more than looking forward to hearing all about their plans for the next step on their journey.

Seedlip would like to invite any supporters, spectators and interested parties to Dandelyan on Monday 15th January to watch the final. The event will be kicking off shortly after 9am so get your alarm clock set and come on down to join in the fun, we’ll see you there.