Earlier this week the final of Seedlip’s first NA Cocktail Competition took place and BarLifeUK were there to watch it unfold.

How many times over the years have you heard or read the phrase ‘a cocktail competition like no other’? In the case of Seedlip’s Cocktail Competition this claim, for once, could actually be upheld.

First up it was alcohol free. A series of cocktail competition worthy drinks, and make no mistake these drinks would hold up in any cocktail comp, with no bitters, no liqueurs, none of your standard drink making crutches.

Secondly the prize was to create a personal version of Seedlip. Sure other competitions are out there which give the winner the chance to create their own brand extension but, as far as we know, none of them get the winner to help plant and nurture the actual ingredients that are to be used, or get them as involved in the design and marketing aspects.

Seedlip owner Ben Branson is passionate about the land and the ingredients that are grown on his family farm. It is on this farm that the winner will be working with Ben and the rest of the Seedlip team to create their own variation.

As well as the actual liquid in the bottle the winner will be involved in the creation of the brand, it’s name, label design, marketing plans and of course the signature serves. However, as is always the case with Seedlip, it is the ingredients and the product that’s produced that really matters, which is why Ben was joined on the judging panel by leading horticulturist Tom Harfleet.

Now it wouldn’t be a cocktail competition without…… well a cocktail, and they drafted in a couple of people who know a thing or two about that, Ryan Chetiyawardana and Erik Lorenz, to join the judging panel.

Each of our intrepid finalists started behind the bar of our host venue, the Best Bar In The World Sometimes, Dandelyan, making their Autumn inspired NA Seedlip cocktail celebrating these green and pleasant lands.

As we saw in the heats working with Seedlip is a challenge that results in some unusual and fantastic flavour combinations as the bartenders have their creativity pushed. Massimilano Terrile from Duck & Waffle kicked off proceedings and immediately showed that the creativity from the heats was going to continue in the final. His drink combined Seedlip Spice with beetroot, grape and mango for a twist on his favourite breakfast drink, the Aperol Spritz.

The Clove Club’s Robert Simpson was inspired by Worcestershire which is the home of the plum (who knew?) as well, of course, as Worcestershire Sauce. With this in mind his creation combined flavours of plum, mushroom and honey with Seedlip Spice. Niall Burgess from The Alchemist in Cheshire took it to the next level by creating his own stock cube of horse chestnuts, pear, lemon and grapefruit, once again matched with Seedlip Spice.

Lastly came Jack Wareing who took his inspiration from his love of apple crumble and his later discovery of his allergy to apples. As a homage to this his drink was based around quince, pear, chai tea and miso, mixed with…… you guessed it, Seedlip Spice.

However that was only half the battle, it was time to step out of their comfort zone, channel their inner David Brent (or someone good) and pitch their Seedlip variation to the panel.

Each finalist was asked to come up with their product idea, it’s name and in keeping with the range a number and spirit animal (Garden is number 108, which is the average number of days it takes to sow, grow & hand-pick their peas, and has a rabbit on the label). They also had to present an overview of the initial marketing campaign and the all important signature serve.

Massimilano went with a Bloody Mary flavoured variation using products from his home of Italy, tomato, basil, lemon, olives and chilli named MissMary 87. He had gone a step further and produced and example of the finished product to knock up a Seedlip MissMary for each judge.

Rob climbed into his best farmer outfit to present his funny and entertaining pitch based on his idea of Seedlip Hedgerow. His product would be based around classic British hedgerow ingredients such as hawthorn, damson/sloe, blackberry, yarrow, mugwort, borage and nettles. The number picked was 30, the amount of years a hedgerow needs to have existed before it can be declared as protected, as for the animal, a hedgehog of course.

During the heats Niall proved he was a great storyteller and used that to his advantage again during his presentation based on his mum’s love of roses. His product Blossom 56 combined rose, cucumber, lemon, cardamon, lychee and lime flowers. He had also gone back to his childhood with regards to the animal picking a moth which he remembers in his garden as a kid.

Jack had really gone to town with his idea picking a famous giant oak tree, a lighthouse and a church which represented might, duty and faith in order. It was these words and ideals which inspired his ingredients of rye, oak moss, apple, myrrh/sweet cicely, parsley and liquorice. They also inspired the name Paladin 452, the number coming from the size of the giant oak.

Seeing the time, effort and thought that each of the finalists had obviously put in was fantastic and showed once again why I’d be shit on Dragon’s Den, I was sold on all of the ideas. However the judges could only pick one and after some deliberation it was announced that it was Rob Simpson who would be making regular trips up to Lincolnshire to work with the Seedlip team to bring Hedgerow 30 to life.

Ben explained Rob’s success ‘Rob took the two current Seedlip products and came up with a variation that fitted within the range perfectly. He also impressed with his authenticity to farm and English hedgerows and of course a very clever cocktail.’

It was a fascinating day and big thanks to all the competitors for making it so, also thanks to the Dandelyan team for looking after us all so well. Finally thanks to Ben and the rest of the Seedlip team for coming up with such a great competition, we look forward to following Rob on his journey creating Hedgerow 30 and keeping you all updated on the progress, most importantly we’re looking forward to trying it. 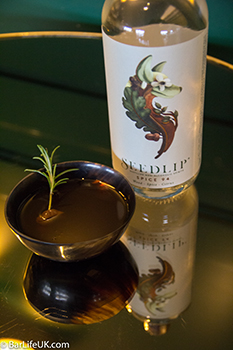 Stir briefly over ice and strain into a horn bowl. Garnish with a rosemary sprig with pickled mushrooms, lightly torch the rosemary to add some bonfire notes.