It is not uncommon for sporting celebrities to put their name on a bottle of booze. 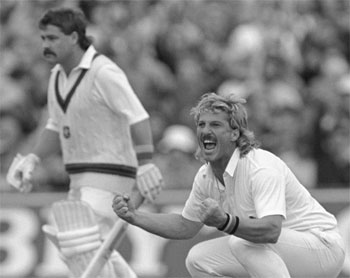 Indeed England cricketing legend Sir Ian Botham is not the first, second, or even third man to do so. Critics might argue that this is a shameless attempt to capitalise on Beefy’s fame, but that is a silly point, as Sir Ian already owns a stake in Australian wine label Botham Merrill Willis.

The first release, a premium line called the ‘Sir Ian Botham’ range, will be unveiled at the London Wine Fair in 2018, and will also include a Pinot Gris from New Zealand, and a Cabernet Sauvignon from Coonawarra (in the unlikely event Australia has a season free of sour grapes). A budget line called ‘Beefy’* will follow on at a later date, and this will be exclusively available on draft at Mbargo nightclub, in Bristol**.

Paul Schaafsma, CEO at Broadland Wineries, described the new brand’s labelling as “classic”, with an upmarket design and a bottle with a deep punt, but also went on to say the range would not carry a picture of Sir Ian.

Schaafsma however failed to answer the most important question – Will it come in a box?