On June 14th, fire destroyed the Grenfell Tower block of flats. The disaster claimed a horrendous number of lives, and left survivors homeless and uncertain what the future will hold for them. The local community has rallied, with donations of clothes, food and accommodation offering assistance well before the Government got its act together. And now, London’s bars want to do their bit. 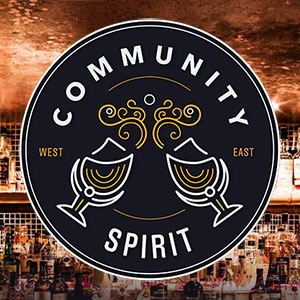 COMMUNITY Spirit is a fundraising event, taking place on Sunday 9th July, at Westbank, in Notting Hill. Trailer Happiness, Callooh Callay, City Social and Barrio Bars will be smashing out drinks to keep guests lubricated while they enjoy live music, DJs (including a set by Shapeshifters), charity auctions and general merriment. It’s an epic party for a good cause, in other words.

Sly Augustin of Notting Hill’s Trailer Happiness has lived in West London all his life and is leading the COMMUNITY Spirit team. He said:

“The events at Grenfell have affected me deeply. But the one ray of light was the incredible response from the community. Regular people stepped up and gave time and possessions without a second thought.

The bar world has an equally strong sense of community – people you don’t know will go out of their way to help you as standard. It was no surprise when people within the industry reached out and offered support immediately after the Grenfell disaster. What I didn’t realise is just how many people wanted to help and just how many brands were willing to get involved.

I can’t wait to see the culmination of this generosity, and we intend to grow Community Spirit beyond this recent tragedy, fundraising to give back to local communities across the capital on an ongoing basis”.

Sly Augustin has spent time on the ground over the past weeks researching to ensure that the money raised is going to who really needs it. 100% of revenues will be going to the charities.

The Harrow Club + Rugby Portobello
These community charities were chosen because not only do they exist to help young people in the community they have proved their value during the Grenfell Crisis and we believe our donation can help to make their jobs easier now it’s harder than ever.

The K & C Foundation
The portion of the donation that is going to Grenfell victims will be distributed by the K & C foundation – an organisation connected to every charity involved, who will be able to distribute the funds effectively and appropriately. The Big Give have pledged to double all donations to this charity while match funds last.

The London Fire Brigade Welfare Fund
The outcome of the Grenfell tragedy would have been even more horrific had it not been for the bravery of the emergency services during the crisis. We want to show thanks for the danger they put themselves in on a regular basis and the appreciation we feel for the selflessness they demonstrated at the time of the disaster which saved so many lives.

All the members of the team are taking the pledge that 100% of revenues will go to the charity very seriously and there will be various checks and balances throughout the process. For more information about the guidelines we’re using, please visit: https://www.gov.uk/guidance/fundraising-legally-and-responsibly#how-to-handle-money-correctly

The Team: The number of people involved has grown exponentially over the past week, however, meet the core team: