The 1800 Visionaries Competition asked bartenders to explore a connection between cocktails and architecture. 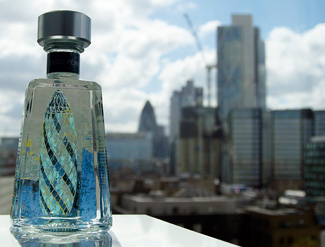 Most cocktail competitions ask bartenders to draw inspiration from either the brand or a personal memory, often resulting in either odious amounts of company history being regurgitated or lofty stories of childhood and the smell of Grandma’s apple pies. Last Tuesday however a very different style of competition was underway in Shoreditch’s Ace Hotel, one which eschewed the norm and instead asked for a connection of cocktails with architecture.

The 1800 Visionaries competition was based on an innovative series of bespoke 1800 Tequila bottles, the creation of which the brand commissioned visionary artist Enoc Perez, best known for his paintings of modernist buildings, to come up with six prints. Inspired by the beautiful results 1800 Tequila then asked UK bartenders to create a serve inspired by their favourite building or piece of architecture.

From artist instillations to London landmarks and ancient temples the submissions poured through until the competitors were narrowed down to a final six and all asked to present their inspiration and cocktail in London on April 18th.

Gathered on the top floor of the Ace Hotel, the breathtaking panorama of London’s cityscape set the scene as the bartenders were introduced and their chosen buildings presented, before the group moved over to the bar and the action began.

First up was Tom Hayes from Scarfes Bar in London whose drink was inspired by the Seed Cathedral. The beautiful sculpture was showcased in Shanghai for the 2010 World Expo, demonstrating the race to save seeds in global seed banks and it housed a staggering 250,000 plant seeds at the end of 60,000 acrylic rods projecting from the walls of the structure.

As you may expect Tom’s drink was based in the plant world and made use of horchata, a rice or nut-based beverage which can be best described as a milk-like texture, shaken with 1800 Tequila Silver, a homemade lemon, lime and verbena sherbet, a few drops of lime juice, one dash of coriander seed bitters and garnished it with grated dark chocolate.

Up next James Madison from the Merchant Hotel in Belfast stepped behind the bar, drawing on the BFI on Southbank to influence his bartending creativity. Speaking of its classic glass structure and surrounding brutalist architecture, James created a drink to sip and savour after a late night film. He combined 1800 Tequila Reposado with Amer Picon, an agave sherbet , chilli and balsamic and finished the cocktail off with a discarded orange zest, creating a digestive-style tequila drink.

Third to present was Abbie Nelson from Chiquito in Ipswich with here drink inspired by the Great Pyramid of Tenochtitlan – a temple which no longer exists but whose ruins are a global tourist destination and where the famous eagle clutching a snake in its beak was supposedly spotted, creating the symbol of Mexico. Abbie wanted to play on this symbol and traditional Mexican flavours to create a refreshing drinks which muddled raspberry, basil and dragonfruit together before being shaken with pineapple juice and 1800 Tequila Anjeo.

Behind the bar next we had Alex Walker from the Beaufort Bar at the Savoy who turned to his own place of work for inspiration, and as he mixed the cocktail Alex took us through a journey around the hotel with each ingredient representing a different room, corridor or experience such as the hotel’s  famous afternoon tea.

Alex’s drink was based on 1800 Tequila Anjeo which he pre-combined with Antica, Campari and Italicus before cooking the liquid with vanilla to create a Peau d’ Espange. This was then strained, filtered, cooled and stirred down with crème de banana along before being strained in to a coupette and garnished with a banana-flavoured edible paint rim and spritzed with a homemade ‘Lobby Essence’. The drink was perfectly executed and was easily the best balanced that day.

Second to last Ciaran Russell from the Tippling House in Aberdeen stepped behind the bar to present his drink inspired by the Taj Mahal and its iconic love story. Ciaran created a tequila sour using 1800 Tequila Anjeo, a homemade peated whisky and earl grey infusion, fresh lemon juice and egg white before zesting the drink with a flamed orange peel. Ciaran then finished off his memorable and charismatic presentation with a song about 1800 Tequila, which certainly won him points from the assembled crowd, if not the judges.

At the end of the line up we had Adam Day from Mr Cooper’s House & Garden in Manchester present his drink, taking inspiration from La Sagrada Familia in Barcelona, the majestic cathedral which to this day remains unfinished. Adam drew on his memories of visiting the site as a teenagers and waiting outside in the hot sun with a satisfying ice cream. He managed to recreate this experience using 1800 Tequila Silver, manzanilla sherry and a sparkling rose wine.

The competition was particularly tight with second and third place hotly contested but it was Alex Walker from the Savoy who stole the day by a sizable points gap across all four judges, including Thinking Drinkers Ben McFarland and Tom Sandham, Jane Ryan from Barlife UK, and Proximo Spirit’s tequila specialist, Oliver Pergl.

Alex will be journeying to Mexico in May to experience 1800 Tequila in its native land. Congratulations are well deserved though to all who competed on the day.