Our tipping culture is one terribly muddled mess, on both sides of the bar.

In fact, tipping is so badly communicated in the UK, that horror stories of companies declaring tips as revenue cause barely a batted eye. And while consumers are openly confused about whether or not their bartender or waiter actually gets that 12.5% extra they just paid on their bill, I’d happily wager their server is just as clueless. 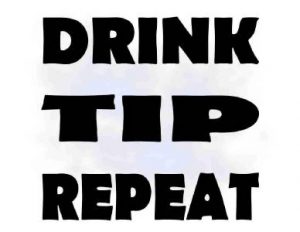 But what about that £5 note left on the table? What about the bar back, supporting the team? The owner pulling a service shift? Or the manager in the office, on-hand to plunge toilets and deal with disputes but not actually serving? What about owners or managers on daytime admin shifts? Who gets tips and who is, perhaps rightly, left out, is a subject you might think you understand, but nonetheless, it’s time we discussed it as an industry.

Service charge is an easy one to take issue with, mostly because no one truly understands just how much they end up receiving. Yet if your company says you receive 87% of service paid then that’s actually all you should be getting. Why? Because of tax – yep the government have quickly caught up with the tipping culture and whacked a healthy 13% on all service charge and credit card tips. They’d quite like 65p from that fiver left on the table too, which technically should be taxed, but that’s more difficult for them to get to. More on that later.

Most companies, groups and even single venues, lump service together each month and divide it out by hours worked, after they’ve given some to Mrs May. They may also take an admin fee for having to sort out all this tax for you without actually earning a penny.  Can’t argue with that too much. But when it comes to taking out service for breakages and walkouts, you might well imagine why a customer would be confused as to why their tips to the staff that served them are paying for a bowl a KP smashed last week.

What would the customer think?

Having interviewed bar owners and bar managers, and with a plethora of experiences under my own belt, I’ve come to see tips like this: what would the customer who left that 12.5%, or even that £5 note, think?

“I never get involved in cash tips,” says Simon Thompson, General Manager of Callooh Callay. “Whether I’m managing or helping with service, hosting or working the floor. I’ve never taken them so long as I’ve been a manager.”

Simon doesn’t say this as martyr and nor is he the first person I’ve ever come across who does this, or rather doesn’t do it, but he’s certainly in the minority. It’s simply how Simon was trained and it was the same when he worked for Be At One, but he’s a great voice of reason in a world where Harrods takes 75% of service charge away from its staff – or up to £5000 in same cases, per year.

“Whatever works for you and your team, as far as I can see it,” says Simon. “Everyday the guys at Callooh still ask me if I’m taking tips, they don’t expect me not to, but for me it’s a moral thing. I think its shameful when huge companies take the majority of service away from the staff or use it to top up hourly wages. You should just manage your business better – if you need to cover your beverage napkins by service charge then you’re clearly not doing a good job. It’s just shady business. And when it comes to something like what’s happening at Harrods – there’s no way those staff have been made aware of what’s going on. Be honest, up front and there’ll be no issue.”

Venues treating service charge and cash tips differently is understandable when it comes to tax and the involvement the company has to have in handling that money. But from the customer’s point of view it’s no difference. It’s still their money being handed over, whether electronically or as paper.

Over at Alastair Burgess’s three venues, Petit Pois, Original Sin and Happiness Forgets, service charge doesn’t exist. But that doesn’t mean it’s all paper and no card. Instead Ali has a function fitted on the card machine that allows people to tip whatever amount they’d like, which then goes through the payroll and, once Mrs May has once again helped herself to 13%, it ends up in the staff’s bank account.

“Everyone gets tips, everyone gets the same cut – bar back or manager,” says Ali. “If one person isn’t doing their job, then no one can. Even if someone’s on a set-up shift they still get tipped out. But in an ideal world there wouldn’t be tips, and we could all pay our staff well above the living wage. I’m not sure whether that means pricier drinks or businesses taking a hit on their revenue, but what worries me is a lot of bartenders think they’re entitled to tips. It shouldn’t be like that and consumers shouldn’t be forced to pay service. It should be in the realm of the consumer to choose whether they want to give a tip. I fundamentally disagree with service charge.”

For the record, Ali himself doesn’t take any credit card or cash tips unless he’s working a service shift at Happiness – a bar which he used to tend solo in its earliest days. For the newer venues, Original Sin and Petit Pois, the tipping culture isn’t built up as much, and Ali doesn’t touch the staff’s tips.

But before he was known globally as the owner of one of the world’s most lauded bars, Ali was working in New York, taking a cool $1000 worth of tips for four nights work. Stateside the cost of labour isn’t built in to hospitality and tips are expected, which also means companies can have more staff – hence the feeling service is friendlier and faster in the US. But that’s slowly changing and as a minimum, and even living, wage is starting to infiltrate America’s restaurant culture, businesses are closing down. Finally the Americans are experiencing the cost of labour which is most bars’ biggest outgoing. When you realise that, it’s little wonder many places are leaping at service charge as the answer.

But while managers like Simon, and owners like Ali exist, there are plenty who are happy to line their own pockets, taking tips away from minimum-wage staff, despite being the best-paid person in the building. Which as you might imagine, does little for morale or team support. There are places in London where co-owners are known to take away cash tips for admin shifts. Just let that one sink in.

One area of the UK that has a strong tipping culture is Liverpool, a relatively young bar scene that sees more tips than many other cities.  It was also here, years before his move to London, that Simon was taught to not take tips as a manager.

“Scousers have long been known to be good tippers. Some put this down to generosity, though I think it can often be due to having a more frivolous attitude to cash than in other cities, too,” says Danny Mercer, owner of Berry and Rye. “A good bartender working in the right bar can make good money. However, it is not always directly related to the amount of effort put into service and product. We have noticed that large rounds of cocktails often lead to less tips than a few beers can.”

Chris Edwards, owner of Filter & Fox, has had a similar experience, something he believes derives from Liverpool’s pub culture of paying each round and tipping as you go.

“When the city centre had its gentrification and the suburban pubs shut down that tipping came with the new drinkers,” says Chris. “At Filter & Fox we don’t do service charge and tips are split between staff on that day – both my business partner and I don’t take tips when we do operational shifts, which is just a bonus of the guys working with us. I really believe that when you employ someone to do a job, it’s your responsibility to pay them and not rely on service.”

At Danny’s venues managers don’t usually take tips when not actively involved in service but when they are, like at Callooh Callay when the bar or floor manager is working the shift, or at Happiness where managers work all their shifts, they’re always do take their tips.

“Allowing managers to take tips only when on service shift can encourage them to understaff, which can harm service, so you need to strike the right balance,” says Danny. “In Liverpool, service charge is still currently something that is only applied in restaurants, however we are exploring it as an option in upcoming projects. When I worked in London it was used to make up wages in lieu of paying a standard minimum wage, which is something I don’t agree with. I think it should be divided out pro rata according to rank and hours worked, with the company taking any processing fees if necessary.”

Service charge is a tricky issue and for many places it can work – when there’s honesty behind the system. But with the amount of mistrust in the general public at the moment it’s easy to see why bars that operate with cash and card tips find it easier to explain to staff how the system works.

Tips and the Taxman

Not so to the government. HMRC has caught up with a few big restaurant groups for not declaring cash tips in the payroll and taxed them retrospectively. You may innocently tell the treasury your staff don’t take tips but if they send in a mystery inspector who leaves a tip and that cash is then pocketed, you’ll quickly find the taxman knocking on your door. They’ll assume a rate of 10%, look at your total income for however long the business has been open and politely say cough up.

This is why service does exist, especially in big groups where they can’t possibly keep track of cash tips. However, as Ali proves, the way to get around that is to track card tips without adding service to the bill.

Whether your venue charges service or not, it’s about time tipping became transparent in the UK. And not just to consumers, but to the staff who work these venues. Imagine the shock of the team in Harrods’s restaurant when they’d been charging all their customers extra money just to line the pockets of the Qatar Investment Authority.

Or, in smaller cases, where cash tips are taken from staff by owners who’ve just been answering emails during the day and haven’t picked up a tray or tea towel all night. Eventually the onus to change these issues is with you.

Find out where your service goes, and when customers ask, be honest.