Courvoisier have been on the road in recent weeks promoting their Taste Of Paris Competition, we popped along to see what was going on.

Courvoisier’s Global Brand Ambassador Rebecca Asseline was on hand to talk through the competition to the assembled crowds as well as looking at the history of Courvoisier and the city at the heart of the competition, Paris.

With that in mind we thought we would provide a bit of inspiration with some of our favourite facts and stories from Rebecca’s talk as well as some others we have stumbled across.

It was the invention of the streetlamp that transformed the Parisian nightlife in the early/mid 1800’s. In fact Paris got a little carried away with the introduction of them to the streets with the city quickly getting the nickname ‘City of Light’.

Another cultural icon of Paris found it’s way onto the streets in the 1800’s and is important in the history of Courvoisier. Built in 1887-89 the Eiffel Tower was the tallest building in the world for an impressive 41 years after opening until the Yanks came along and beat it. At the official opening of the tower only two alcoholic liquids were served, Champagne (of course) and Courvoisier, showing the importance and prestige of the brand to the French public.

The Eiffel Tower wasn’t always that classy though between 1925-34 Citroen decided to advertise on it with giant lightbulb lit letters spelling out the company name. It looked like arse.

When the tower was first opened the public were nervous about going up so high without breathing apparatus, afraid they would die from lack of oxygen. The towers owners provided a doctor at the bottom to sign a piece of paper for anyone worried assuring them they would survive and giving them a legal right to sue if they did collapse. (Rebecca told this story, however we haven’t been able to substantiate it as of yet. Seeing as it’s so good we had to share.)

The Parisians love of outdoor eating and drinking has got out of hand. If you were visit one of their ‘open terraces’ (a pub, cafe or restaurant with a outside area) every day it would take you 29.8 years to visit them all. If anyone would like to sponsor BarLifeUK to do this please get in touch.

They also love bread to much. Whilst we appreciate their baking skills are revered around the world any city that has more bakeries (1,784) than bars (1,124) needs to have a word with itself.

The motto of Paris translates to ‘Tossed but not sunk’….. which is funny.

There you go. Inspired? Or perhaps tired? In that case check out the specs to the Courvoisier Espresso Martini that we had a couple of at the session. 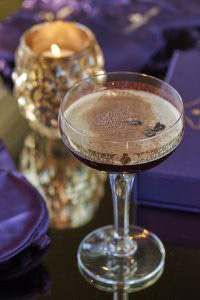 Shake and fine strain into a cocktail glass, garnish with three coffee beans and a dusting of cocoa powder.