In case you hadn’t noticed a lot went on during London Cocktail Week, one of the biggest events was the UK final of the Monin Cup with bartenders from across the country attending.

The Monin Cup is more than just a cocktail competition, it is a celebration of the UK (and world’s) best young bartending talent. As such the UK final isn’t just about making drinks. The finalists, chosen from heats around the UK, not only got to come and experience LCW but also got to attend a masterclass from Peter Dorelli. 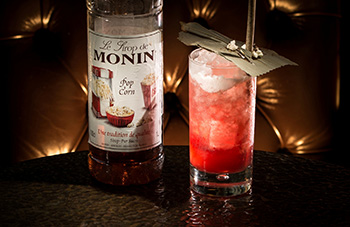 That was the enjoyable calm before the storm. On day two they arrived at the Marriot County Hall to compete for the grand prize of a trip to Paris to compete in the global final.

Each competitor had to make two drinks: one cocktail and one mocktail for the judging panel. Whilst the heats had been a fun and relaxed affair the pressure had been cranked up in the final, not least with the introduction of a shouting timekeeper in the form of UKBG Chairman Michael Sweetman. If they weren’t nervous before (many of them in their first major competition final) they were once he got hold of them.

Alex kicked off with a Bubblegum Sazerac and followed it up with a green tea and banana creation, he remained cool headed and ensured his drinks were served perfectly despite going a little overtime. Matyas followed up with a presentation focusing on the history of Monin, his drinks with flavours such as rosemary and tonka bean in one and ouzo, blueberries and honey in the other, were designed to revitalise.

Elle drew flavour ideas from her recent honeymoon to Sorento in Italy for her gin based serve and Japanese tea ceremonies for her floral, jasmine mocktail all whilst remaining clear, concise and calm. Charley, one of the more experienced comp bartenders in the field, proved as always her mind works in marvellous and crazy ways with a Mac & Cheese inspired serve and a Harry Potter inspired second, she also won the fancy nails award again.

Robert’s first ever competition was the Monin Cup last time round, his experience of the format and the UKBG rules shone through as he produced two great sounding drinks in good time with an almost floor-less technical presentation. Barnabas may not work in the most ‘UKBG venue’ but that didn’t put him off, a pistachio and bourbon drink sounded fantastic and he continued the nut theme with a hazelnut, ginger and passionfruit non-alcoholic drink. 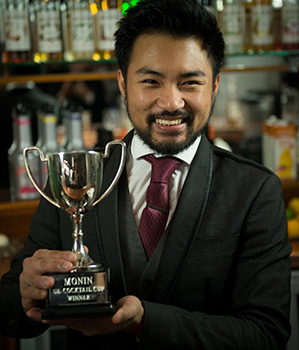 However it was a case of saving the best till last, with Peter coming away with the cup and a ticket to Paris.

Peter blew away the judges with an assured presentation and a sophisticated balance of flavours, for his two Monin signature serves Hootenanny and Caramel and Popcorn.

Both Peter’s drinks were inspired by childhood memories; his cocktail Hootenanny featured Monin Butterscotch syrup, bourbon, pineapple juice and Fernet Branca, capturing the fun of a family get-together. His non-alcoholic Caramel and Popcorn brought back memories of trips to the cinema, showcasing Monin Popcorn and Salted Caramel syrups and Le Fruit de Monin Raspberry complemented by a mixture of fruit juices.

Luca had this to say: “The competition produced some fantastic drinks which showed flair and innovation but Peter was the clear winner. His signature Monin serves were of the highest quality, demonstrating an impressive range of skills and perfectly-balanced flavours. I look forward to seeing Peter take on the world at the International Monin Cup Final in December.”

Second and Third places went to Charley and Matyas respectively for their superb efforts but the day was all about Peter so it seems only fitting we leave the final word up to him.

“All the other finalists were amazing so I’m really proud to have won – to be honest it’s still sinking in! The Monin Cup UK has been a fantastic experience and I have learnt so much but there is still a lot to learn. I feel very fortunate for the opportunity to represent the UK at the international final and I can’t wait to get to Paris.”

The Monin Cup UK is supported by: