The Scotland 100’s Second Meeting – What Are They Up To, and Why?

The 7th July saw the 2nd meeting of the 100 – a group of 100 (obviously) hospitality folks from around Scotland. 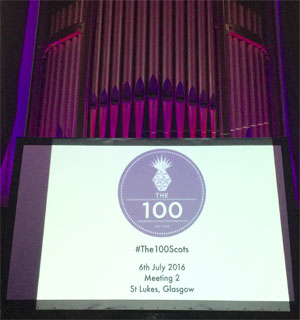 Held in the stunning St Luke’s in Glasgow’s East End, the theme seems to be venues which were once churches (Dave Broom insisting on talking from the Pulpit of meeting 1 at St Stephen’s Church in Edinburgh was a favourite moment.)

So what is the 100? Well.. that’s pretty much what the first meeting tried to work out. The brainchild of a few industry leaders; Andy Gemmel, Stuart McCluskey, Mike Aikman and Graham Suttle, interest was there before anyone really knew what it was.

As career hospitality people, we all have our gripes and things we’d change if we could. The 100 concept was to bring about this change. The first step was to conceive the mission – an industry voice to go to Government, a platform to shout about what Scotland’s doing, but mostly a group of people who can help – each other, staff, training, anything! General consensus was taking Scotland’s hospitality to the next level and learning more about each other; finding out what different areas of the industry are up to.

Within the 100 there are bar/restaurant owners, chefs, bartenders, licensing lawyers and tourism professionals – with a range of experiences, ages and skills, collaboration should be a natural step. There will always be people who can’t make it to meetings so they are asked to send others in their place, the benefit of this being lots of new faces each meeting.

So… after an in-depth form was filled out by each member after meeting number 1, and the addition of Lauren Stewart to the board of the 100, meeting 2 was much more structured. After a couple of welcome drinks which included a ‘Purple Hand’ – a gin drink with hibiscus ice that if you touched would result as the name suggests – Andy welcomed the group and informed us that innovation and development was the theme of the day. On this note, another available drink on the day was the Smokey Cokey (Lagavulin and Cherry Coke on draft – don’t knock it.)

Listening to some amazing people talk is one of the main parts of the 100 – the last meeting had Dave Broom, Petra Wetzel and Tom Kitchen inspiring the room and this meeting was no different. Our innovative speakers this time round were Ben Reade of The Edinburgh Food Studio, Ryan Chetiwardana of Mr Lyan, Josh Littlejohn and Alan Mahon of Social Bite and Brewgooder and Gordon Millar of Scot Street Style.

Scotland’s ability to grow as well as the view of Scotland from outside of the country, were all brought up throughout each person’s talk but from different opinions which was super interesting! Ben’s background obviously being food, that was his main focus; There was a lot of talk at the last meeting with how to keep skilled workers in Scotland – Ben’s view was DON’T; let people leave and learn – they’ll then come back one day and do something amazing. 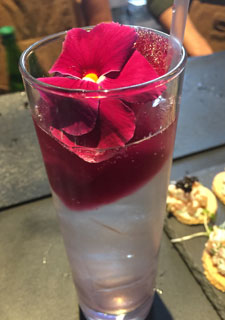 Ben also mentioned wanting more EU recognition for regions of Scottish produce including East Lothian pigeon (which he mentioned a few times and made me really want to find out what it’s all about.) His other main point was the lack of communication platform about what Scotland is doing – in his words Scotland is not all ‘Haggis, Whisky, Stags and Heroin it’s Squat Lobster, Seaweed Soups from the West Coast, it’s so much more varied than what’s communicated right now.’

Next up we had Ryan Chetiwardana – Mr drinks innovation himself. Ryan talked about asking yourself why you’re doing what you are and ensure the answer ‘that’s the way it’s always been done’ isn’t it. Stories and heritage are of course important but do not follow blindly and repeat – we’ll never progress that way, also, having people in your team from a range of backgrounds means they’ll always look at things in different ways.

An example he gave was waste; instead of just rolling with it, he wanted to look at how to make his team use 20 teabags from that day or how to use the same lemon in 3 or 4 ways. Challenges change perceptions, do not sit on your laurels – if we’re not improving, we may as well give up and this what excites Ryan about the 100 – doing it for the reason of moving forward. His last message was ‘don’t do gimmicks or be pretentious, if you believe in what you’re doing and there’s a reasoning, other people will believe too.

Josh Littlejohn and Alan Mahon of social businesses ‘Social Bite’ and ‘Brewgooder’ were next up- if you’ve not heard of them, check them out. Social bite have 5 restaurants around Scotland and they have 3 ideals:

Brewgooder on the other hand are a beer producer who put their profits into clean drinking water in Africa – drinking beer for a good cause? Everyone’s a winner! The idea was born, as most great ideas are, from trying to right the world’s wrongs over a drink. Both businesses have a great moral reasoning behind them and it’s great to see both doing so well!

Lastly, Gordon Millar – the only speaker of the day who wasn’t linked to hospitality in some way but feels very strongly about collaboration and Scotland as a whole. After doing some social media for the Dalai Lama (sounds amazing) on his tour of Scotland and getting him snapped in a ‘tartan of peace’ scarf, he blagged himself into NYC’s tartan week and had his photo taken by Bill Cunningham of the NY Times.

He described how from this his followers on social media grew and used the phrase ‘followers have become currency’, he then used this new following to create events for likeminded individuals to socialise in an inclusive, diverse group. These groups enjoy the heritage and contemporary elements of Scotland- he says there’s been a cultural shift in Scotland recently and we can make the most of this through social media revolution. ‘The world can view you through a hashtag’ and if we can use this, opinions of Scotland can change for the positive.

After the talks, the 100 split into 4 groups to discuss different points which had been brought up in the feedback of the first meeting:

All 4 groups had people from a range of backgrounds which led to some really interesting discussions we got a short feedback from 1 person in each group. We had some incredible ideas coming out of a 10 minute talk, so it will be great to see how this expands. Ideas included:

All in all we had an amazing, inspiring day and not one person left without ideas for the next meeting and beyond. I look forward to seeing how the 100 progress and being a huge part of the Scottish hospitality industry!

Sian Buchan (nee Ferguson) is now based in Edinburgh after nearly 10 years in Aberdeen. Whilst studying, she worked in a number of bars and decided to go down the bartending route rather than 'a real job' - best decision ever. Loves travelling, cocktails and rubbish 90s pop!