Stephanie Simbo wins a trip to Diplomatico’s distillery in Venezuela, and support to run bespoke events at her bar, Reverend J W Simpson.

Diplomatico Rum’s recent ‘Diplomats of a New Era’ campaign has so far recruited three Diplomats: a chef, a gardener and a tailor. Now a bartender, in the form of Stephanie Simbo from Reverend J W Simpson, joi 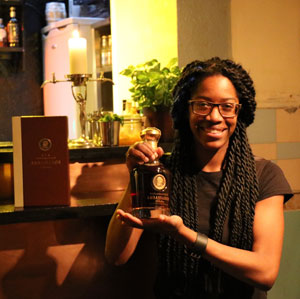 ns the rum’s diplomatic corps, and wins a trip to Venezuela to boot.

You can read about the competition here.

Diplomatico were searching for a bartender who embraces innovation, adventure, passion and self-belief to redefine what it is to be a modern day diplomat, and to do this, they posed a series of questions. Of the dozens of responses we received, the judges were most impressed with Stephanie’s.

The judges were also really impressed with Stephanie’s New Diplomat qualities. Having graduated from Business School, Stephanie began writing applications to big firms, and after months of submissions, she began waitressing and then bartending. It was then that Stephanie realised that providing the best service for her guests and her impact on their day through her bartending was what she was destined to do.

Growing up in a Caribbean household, rum is in Stephanie’s DNA. Rum evokes memories of her father cooking crepes in February and flambéing them with dark rum, and is Stephanie’s go to spirit for its wide spectrum of aromas and flavours and its versatility.

Her experiences bartending inspired her to quit the comfort of her mum’s house and travel abroad. Stephanie believes that it’s part of every bartenders’ role to educate people. So she travelled to South Africa and, while in Cape Town, she had the idea of an academy that gives a second chance to ex-prisoners through learning about bartending. This is a current project Stephanie is working on.

Along with the trip to Diplomatico’s distillery in Venezuela, the brand are going to supply stock and support for Stephanie to run some inspirational events at Reverend J W Simpson. As soon as we know wen these will take place, we will let you know, so you can go and enjoy being looked after by a New Diplomat.

Congratulations also go to runners up, Shora Gordon Bloomfield of Discount Suit Company, and Alexander Cronin, or Cut & Chase, who both really impressed the judges.