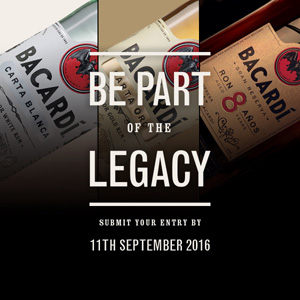 Legacy is one of BarLifeUK’s favourite competitions. Not just because it is epic in scale and has taken us to some beautiful parts of the world, but also because everyone involved in it so obviously wants bartenders to get as much from the experience as possible.

If you would like to know more about our thoughts on the competition as a whole, here is some further reading:

Back to the coming competition, the aim remains the same – to create a drink that can sit alongside Bacardi’s existing and impressive list of classic cocktails.

For the first time, entrants will be able to use Bacardi’s 8YO expression, Ocho, along with Carta Blanca and Carta Oro.

There will be a series of inspiration seminars throughout the UK in July and August, followed by regional heats in September, for which, we are happy to announce, BarLifeUK will be joining the judging panels.

The heats will produce five regional winners, who will compete against each other at the Bacardi Legacy Northern European Finals in London, on November 8th.

And this is where the format changes from previous years. This year, there will be one UK winner who automatically qualifies for the Global Final in Berlin, next Spring.

So, in effect, there will be one ‘most promising’, rather than three, allowing Bacardi UK Ambassador Metinee Kongsrivilai to give one-to-one support to the winner as they embark on a five-month promotional campaign, leading up to the big night in Berlin.

To enter, send your Bacardi Legacy Cocktail specs, along with a description of the inspiration behind it to Metinee Kongsrivilai.