Bacardi Classics Softball Is Back

We love Bacardi Classics Softball and, according to the amount of supporters who drag themselves out of bed on a Sunday to watch, so do you.

If you haven’t been let us paint the picture.

A lot of pale skin is on show as 8 teams of bartenders compete for a trip to Ibiza. During the day the games are largely ignored by the crowds of supporters as they enjoy Bacardi cocktails courtesy of Cocktail Trading Co, Hatuey beers, which are exclusively shipped in from Miami, and food from Dirty Bones. 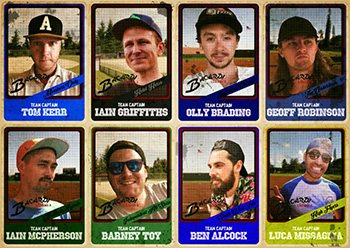 By the end of the day one team wins and nobody but them agrees they deserve it, the annual game of ‘I’ve fucked my leg up more than you’ begins, everyone makes up from the surprisingly large amount of arguments that ensue and all that pale skin is replaced by red skin courtesy of either the sun or injuries.

There is a slight change this year with North & South teams coming in and the Media Team being banned after our whitewash of last years competition. Jake Burger has also bowed out (or been kicked out) which will probably help with the insurance quote.

The teams and captains, as a result, look like this:

It is an open invitation to anyone in the industry plus any friends, family, and if you really must, dogs you have in tow.

There is even an after party at Little Bat (advanced warning: May is exceptionally happy with that pun) this year, so there is no excuse to miss out. We’ll see you there.