NOLA managed to get their hands on some Trump Vodka, they thought they’d have some fun with it.

BarLifeUK doesn’t usually feature cocktails created by bars for the simple reason we’d never have time to do anything else but when NOLA’s owner James Triffo told us about his plans we couldn’t resist. 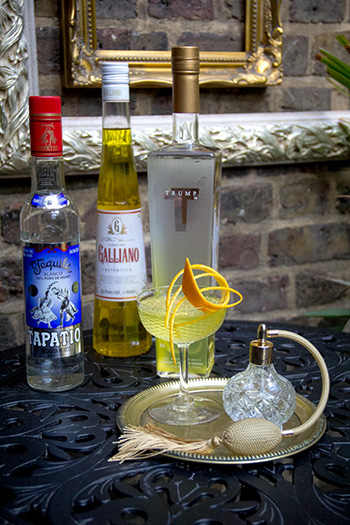 Unless you are a feckless idiot you would have noticed that the the toupee-wearing racist Donald Trump is running for President of the United States. Let’s stay away from how mind-numbingly fucking ridiculous that is for a second shall we.

However on route to losing most of his dad’s money he launched an ill fated vodka brand, called…. you guessed it, Trump. Finding a bottle is harder than knocking one off whilst looking at a Trump poster but Triffo was on a mission and managed to track down three bottles.

All that was needed was a drink to use it in and with the help of NOLA Bar Manager Ian McIntyre they created a twist on the Freddy Fudpucker called The Mexican Wallbanger.

The drink consists of Tapatio Blanco Tequila, clarified orange juice, Galliano and a dash of Gaz Regan’s Orange Bitters (Gaz if you don’t know, is a huge Bernie Sanders fan for the record). We’ve had it, and it is a lovely drink.

The main reason for this is the fact Trump Citron is missing from the recipe, this is in no small way due to the fact it tastes fucking awful. Ian summed it up best when he noticed that it had a slight after taste of lemon washing-up liquid. So much so we are convinced that the ‘citron’ aroma is given to the brand using the same chemicals as Fairy use (we have no proof of this – BarLifeUK Lawyers).

However each drink will be lovingly spritzed with the horrific human’s vodka as well as a sprinkling of gold dust. In a final two fingers to the woman hating fatty NOLA will be donating £1 from each drink sold to the Hand-In-Hand For Syria charity.

Get down to NOLA soon to try one as they will no doubt go quicker than a copy of ‘How To Shag Your Cousin’ at a Trump rally.